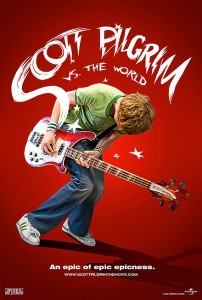 Just back from Scott Pilgrim vs. The World, which (as you may have read by now) is a fantastic adaptation of Bryan Lee O’Malley’s siÂ­x-volume series of graphic novels.Â  This is why.Â  Director Edgar Wright understands what O’Malley is trying to do.Â  As in the books, the film treats narrative as a playful, allusive, genre-bending game.Â  Put another way: it’s not about the story.Â  It’s about the way O’Malley and Wright tell the story – virtuosic understanding of form, kinetic sense of visual movement, and hyper-consciousness of … everything. Really –Â of everything. Narrative structure, video games, comic books, action films, rock clichÃ©s, sit-coms, and emotion.

I say emotion because at the heart of the story, there is, well, heart.Â  Three hearts.Â  Scott Pilgrim’s, Ramona Flowers’, and Knives Chau’s.Â  And all three characters do learn something about love during the film –Â that it comes with baggage, that you need to respect yourself, and that it’s worth fighting for.Â  That emotional resonance –Â wonderfully delivered by Michael Cera (Scott), Mary Elizabeth Winstead (Ramona), and Ellen Wong (Knives) – gives this fast, funny, clever film enough weight to keep things grounded. 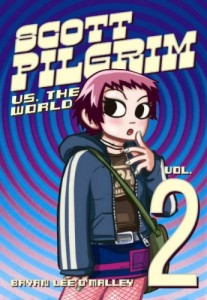 What’s fun, though, is the way Wright packs the scenes with references and jokes.Â  O’Malley does this sort of thing, too.Â  The little boxes that give you “fun facts” about the characters also appear in the comics, as do the references to videogames.Â  Wright does, of course, make some changes –Â moving pieces of plot around, adding some new gags and scenes.Â  But he understands the essence of what O’Malley is doing.Â  If we (taking Linda Hutcheon’s advice) think of adaptation as a kind of translation, then these two quotations from Walter Benjamin’s “The Task of the Translator” are key to evaluating any film version of another work (in this case, Wright’s version of O’Malley’s novels).Â  First, “no translation would be possible if in its ultimate essence it strove for likeness to the original. For in its afterlife . . . the original undergoes a change.”1 Second, “[t]he task of the translator consists in finding that intended effect [Intention] upon the language into which he is translating which produces in it the echo of the original.”2 I have no idea whether Wright has read Benjamin, but he grasps both of these ideas.Â  In the case of the first, he understands that attempting to undertake a “faithful” adaptation is impossible.Â  As Hutcheon3 notes, different media have different strengths and weakness: attempting a literally faithful adaptation simply doesn’t work.Â  What works in a comic-book format will not necessarily work on screen, and vice-versa.Â  In the case of the second point, Wright sees O’Malley’s intended effect, which is not merely a mash-up of a relationship story with ninja narratives and Final Fantasy II.Â  It is this, but it’s also using the storytelling techniques of these media to tell its own story.Â  And it’s the confidence in deploying these techniques with the precision, verve, and nerve that only a master can do.

I know that Scott Pilgrim vs. the World has received a lot of hype … along with reviews by some people who didn’t get it (deftly dismantled by Linda Holmes at NPR).Â  This a case though when one can safely dismiss the detractors and (with apologies to Chuck D) believe the hype.Â  Beyond the film’s many innovations, it’s also a really fun evening at the movies.

3. Any interesting insights about adaptation here derive from Linda Hutcheon’s excellent book, A Theory of Adaptation (New York and London: Routledge, 2006).Â  Any other insights likely derive from my own essay on the Harry Potter movies: “Lost in Translation?: Harry Potter, from Page to Screen,” which appears in Harry Potter’s World: Multidisciplinary Perspectives, revised edition, ed. Elizabeth Heilman (Routledge, 2009), pp. 275-290.