MLA’s coming up later this week.Â  Can you bear to read yet another advice column?Â  If not, then you may want to skip the following personal narrative that, yep, includes some advice (well, inasmuch as my personal example may be instructive… which it may not be).

You may ask yourself: well, how did I get here?

Here’s how I got from Adjuncthood to Professorland: Luck, hard work, and opportunism. Â Not much to say about the “luck” component, but I can say plenty about the latter two. I spent two and a half years as an adjunct before I got an MLA interview.Â Why? No publications.

A year after I got the Ph.D., my partner won a tenure-track position at the College of Charleston. So, we moved to Charleston. Asked whether there would be any professional opportunities for her spouse (me), the Chair of the College’s English Department said “No.”Â  So, I began that year (fall of 1998) teaching one section of Composition to the tune of $1850 for the term (no benefits, of course), and seeking gainful employment beyond academe. Â I sent out applications, went for a couple of interviews, and even did some free-lance computer consulting. Â A month into the term, an adjunct flaked out, leaving the Department with three sections of Composition suddenly in need of an instructor. Â The Chair offered me the full semester’s salary for each section, if I would teach all three. Â With a dwindling savings account and no other opportunities, I accepted, and began shouldering the 4-4 course load that I would maintain for the next two years. Â I also decided that maybe I’d stick with academia. Â I had one article forthcoming in Children’s Literature, but that was it. Â I quickly realized that I’d be doomed to adjuncthood unless I published. Â Also, working as an adjunct made me angry – angry at the exploitation, angry at the permanent second-class-citizen status. Â I decided: let’s channel this anger into an enhanced rate of production.Â This was my Scarlett O’Hara moment. With God as my witness, I’ll never be an adjunct again! Well, words to that effect.

Deciding to publish my way out of adjuncthood, I said “yes” to every opportunity, figuring that once I’d committed to doing something I’d simply have to follow through and do it. Â Articles, book reviews, encyclopedia entries, conference papers. Â I began revising the dissertation as a book manuscript, and began laying the groundwork for another project – what was then going to be a Twayne series book about Crockett Johnson (when I learned that the Twayne imprint was defunct, it developed into a double biography of Johnson and Krauss). After I presented a conference paper, I would then revise, expand, and publish. Â Indeed, I’ve maintained this practice: Every conference paper I’ve presented either has been published (in expanded form) as an article or chapter, or will be published. Â In the past few years, I’ve had to curtail the practice of saying “yes” to every opportunity – otherwise, I’d have imploded. Â But it was a successful strategy for turning my anemic CV into a healthier one.

When I was increasing my rate of production, I decided to market myself as both a twentieth-century / contemporary Americanist (the field in which I trained) and a Children’s Lit person. Â I thought that trying to compete in both categories might increase my chances of success. Â It did.Â  I never got any interviews as an Americanist, but at the 1999 MLA, I had three interviews – my first MLA interviews ever!Â  Two were for children’s lit and one was for teaching with technology. 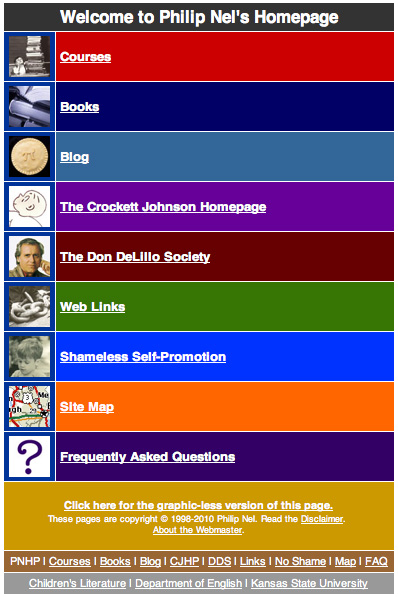 Why technology? Â During my underemployed months (before I had that 4-4 load), I developed my website.Â  I’d launched it the year before because I thought that learning to make a website would give me a useful skill. Â Also, there were no websites devoted to Crockett Johnson. Â And I wanted to write a paper for a Children’s Lit conference. Â These three ideas prompted me to create a Crockett Johnson Homepage, in addition to my main website. Â Work on the Crockett Johnson website in turn developed into a conference paper (1999), articles (2001, 2004), a reference entry (on Ruth Krauss, 2006), and a double biography (2012). Â I came to realize that having a website is useful for both self-promotion and research. The Harold for whom Johnson’s purple-crayon-wielding character is named found me through the website, and helped me contact his mother (Johnson’s sister). Â Indeed, I met Julia Mickenberg (my co-editor on Tales for Little Rebels) via my website – a friend of the Crockett Johnson Homepage directed her to me. Â These days, you have blogs and social networking sites, too. But, whatever sort of presence you maintain, a web presence is useful. I later found out that my website was a factor in Kansas State’s decision to hire me: the first thing I did upon arriving (on the Department’s request) was to redesign the English Department website. Â Fortunately, it has since undergone a much better redesign – tho’ I & my colleague Naomi Wood continue to maintain it, albeit less regularly than we ought.Â (This is part of the service component of our jobs.)

In early 2000 (about the time Kansas State made me an offer), Continuum Publishing asked Mark Osteen if he’d like to write a readers guide to Don DeLillo’s Underworld.Â  He wasn’t up for it, andÂ so he recommended me… which led to Continuum asking me: would I like to write this book or were there any other contemporary novels (British or American) for which I’d like to write a readers guide? Â I was feeling a bit DeLillo-d out at that point – having just written a reference entry and two articles on him. Â But I said sure, I could write on Underworld, and, as for contemporary novels, what about Harry Potter? Â I’d recently written a reference entry on the Harry Potter phenomenon, and was about to start a children’s lit job. Â So, I said, I’d be happy to write two readers guides, one on Underworld and one on Potter. Â David Barker (at Continuum) said sure, Harry Potter was a good idea, but he’d prefer to have one author per book in the series: So, which would I rather write, Potter or DeLillo? Â

I chose Potter, which (published 2001) quickly became the best-selling volume in the Continuum Contemporaries series of Readers Guides – indeed, it paid the $3000 in permissions fees for the book that developed from my dissertation (The Avant-Garde and American Postmodernity: Small Incisive Shocks, UP Mississippi, 2002). Â Choosing to write on Harry Potter wasn’t consciously opportunistic: I thought it would be fun, and I imagined that it might find an audience. Â I had no idea that it would lead to so much media attention, or that it would even lead to my first invited talk, in 2003.

The two Seuss books represent a more calculated intersection between my own interests and a developing opportunism. Deciding that a book published on the 100th anniversary of Seuss’s birth might conceivably draw some media attention, I worked hard to finish the manuscript of Dr. Seuss: American Icon so that it could appear by early 2004.Â  (For more details on the Seuss books, please see “Fortunate Failures; or, How I Became a Scholar of Dr. Seuss” – the debut post on this very blog!)

I’ll continue this tomorrow with: the job interview itself, thoughts on dual-career hires, and links to other articles on career advice.Â  So, if this didn’t bore you to tears, then please tune in again, dear reader!