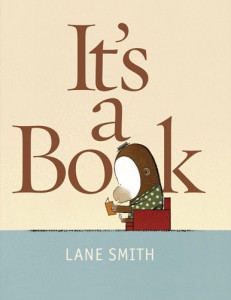 Comedy is hard.  Lane Smith makes it look easy.  I’m not going to reveal the punch line to his latest, It’s a Book, because I don’t have to: There are plenty of amusing moments along the way.  When the jackass asks, “Where’s your mouse?” Smith provides a wordless page in which a mouse emerges from beneath the monkey’s hat.  Deadpan.  And funny.  On his blog, he provides some insight into some of the labor behind the humor: the jackass was originally a child, but he didn’t want people to think he was mocking a child. So, he turned him into an animal. Which is funnier.  For some glimpses of the finished book, here’s a the book trailer, which, incidentally, also omits the punch line:

In many ways, It’s a Book epitomizes what Smith does.  Most of his books have some metatextual element to them.  That is, they’re books about books, books that reflect on what a book is or should be.  His first collaborations with Jon Scieszka – The True Story of the Three Little Pigs by A. Wolf (1989) and The Stinky Cheese Man and Other Fairly Stupid Tales (1992) – both dismantle fairy tales.  In the former, Al Wolf provides his version of what that huffing and puffing was all about.  In the latter, after Jack the Narrator spoils the story by summarizing it before it begins, the wolf and Little Red Running Shorts leave the story, creating a blank page in the book.  The Happy Hocky Family (1993) and The Happy Hocky Family Move to the Country (2003) parody Dick and Jane and similar primers.  In the first book, Henry and Holly Hocky tell us “We take CARE of our TOYS” because “We do not want our toys to become broken.” Then, enter Cousin Stinky, clad in bright red advertisements from the backs of comic books.  “Where are your toys?” he asks.  Smith follows that with this page: 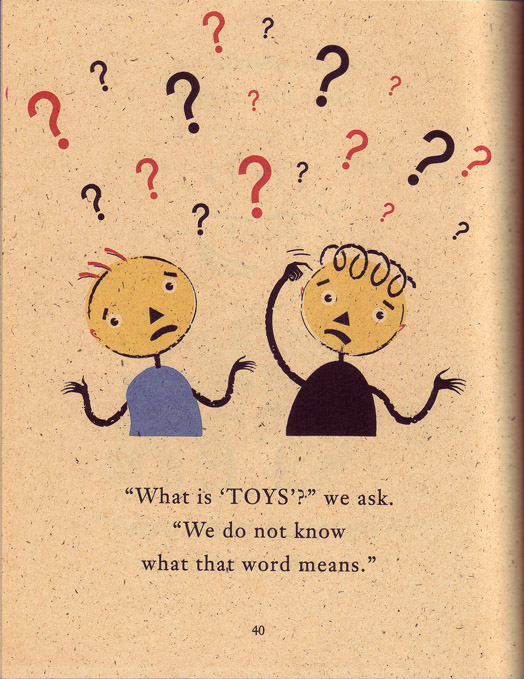 I love this page.  It gently mocks the earnest good behavior of the preceding pages, where Henry and Holly model how children should take care of one’s toys.  Since Smith has been evoking the well-behaved children of the Dick and Jane books, you might think this page would be on the virtues of sharing, even with Cousin Stinky.  But no.  This page says if you want to take care of your toys, then lie to your cousin.  The comic timing is perfect.

So are all the details. From the ersatz Mondrian on the wall in It’s a Book to the presidential biographies strewn about Katy’s floor in Madam President (2008), Smith creates images that are fun to re-read.  The more you know, the more you notice: his version of Gilbert Stuart’s portrait of George Washington adorns the wall in Katy’s house and serves as the model for Smith’s version of the first president in John, Paul, George & Ben (2006) – the title of which, of course, is a comic riff on the Beatles.

He’s also careful about the details he chooses.  The title page of John, Paul, George & Ben alludes to the Beatles’ Abbey Road (1969), but Smith shows restraint.  He does not show the “four lads” crossing the street or dressed in identical clothes, but he does place their bodies in the same positions as those of Harrison, McCartney, Starr, and Lennon. (Visually, John Hancock corresponds to George Harrison, Paul Revere to Paul McCartney, George to Ringo Starr, and Ben Franklin to John Lennon.) 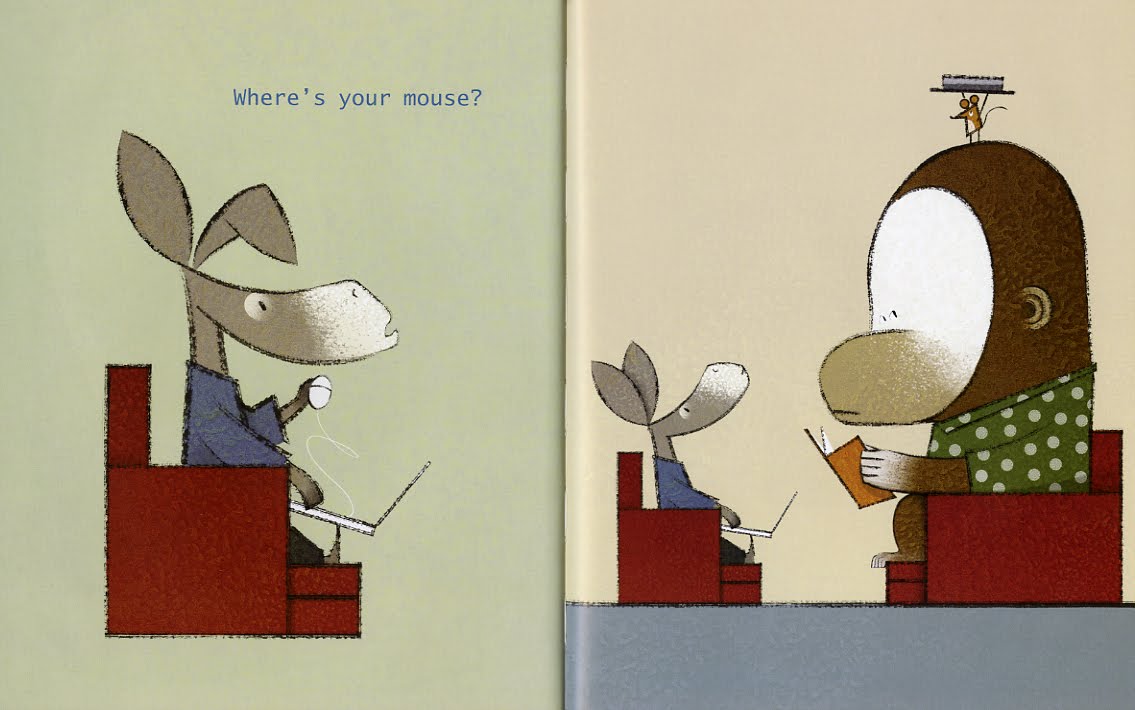 In It’s a Book, he strips away anything that might distract us from the heart of the story – the conflict between the modern jackass and the traditional monkey.  His backgrounds are unusually spare, a change in color suggesting a change in tone or mood.   His language conveys the essential differences between the characters, which in turn creates the humor.

Yes, it’s a book.  But it’s also a fine example of storytelling, artwork, and humor.  In other words, it’s a Lane Smith book.