For those readers (2 readers? 3? any takers?) who find these posts marginally more fascinating than watching paint dry, here’s a page from the just-edited Chapter 22 of my The Purple Crayon and a Hole to Dig: The Lives of Crockett Johnson and Ruth Krauss (forthcoming from the University Press of Mississippi, 2012). Â For the record, the barely legible handwritten editorial notations are all mine. 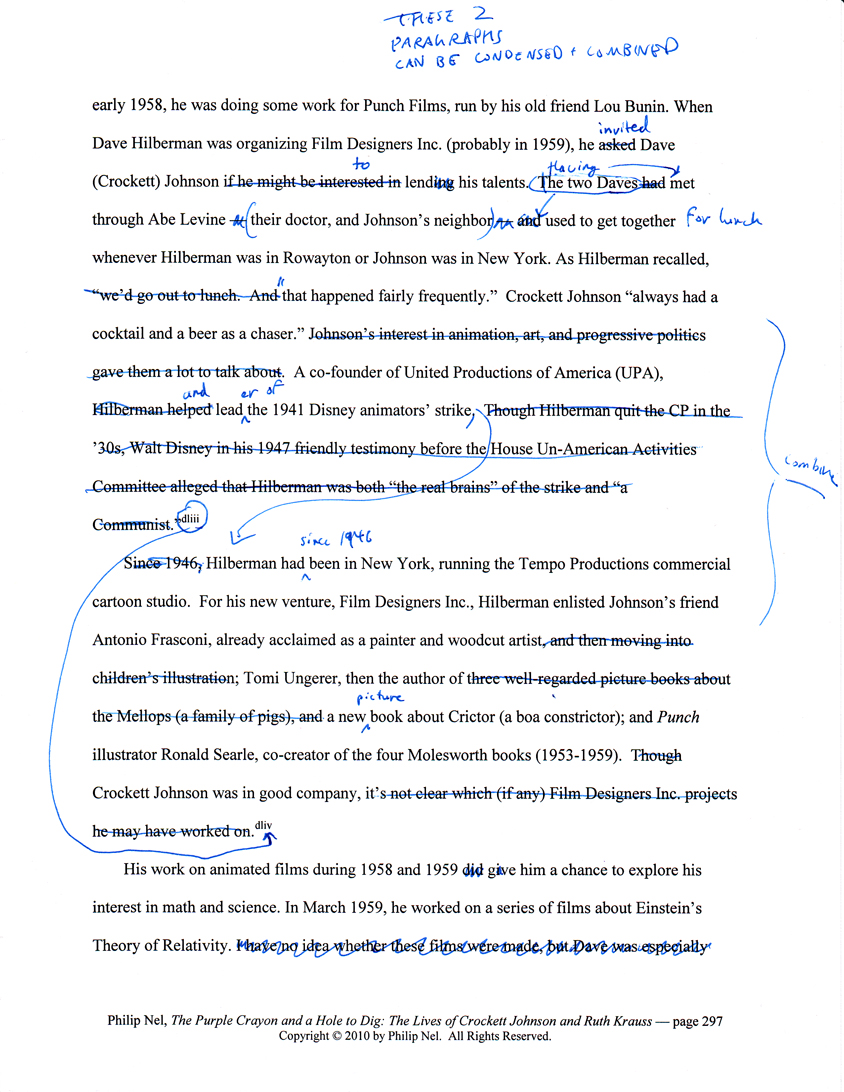 On the page above (click to enlarge), I cut out a fair bit about Dave Hilberman (1911-2007), an animation pioneer whom I was fortunate to interview back in 2003. Â His is a fascinating story, but the book isn’t about him. Â I’ve tried to retain enough to convey some sense of the people Crockett Johnson (“Dave” to his friends) was working with, and why these people are important. Â The context for this paragraph is that, after A Picture for Harold’s Room (1960), Johnson publishes no children’s books until 1963: one reason for this gap is the many other other projects he was working on. Â The next paragraph (of which you see a little at the bottom of the page) picks up the theme of Johnson’s interest in and study of mathematics: in the Holt Barnaby books, Atlas’ formulae are real, and Johnson devoted the last decade of his life to mathematical paintings, even inventing a couple of original mathematical formulae.

(I also cut some bits pertaining to Ruth Krauss in this chapter, but very little and largely contextual.)

In all, I’ve knocked out 367 words from the chapter, reducing the manuscript to the still too-long word count of 134, 744. Â It’s thus 7,422 words shorter since the last edit, but still 19,744 words longer than the contract specifies. Â If I’m lucky, I’ll be able to get it within, say, 15,000 words over the limit. Â During the next week (which also includes paper-grading, exam-grading, recommendation-letter-writing, grade-calculating, essay-refereeing), I want to get through Chapter 30 – which is currently the book’s final chapter.

I say “currently” because the next phase is restructuring the first eight chapters, which (I suspect) will involve cuts beyond what I’ve already made in this round of editing. Â Right now, these chapters alternate between Krauss’s life and Johnson’s: 1 is hers, 2 is his, 3 is hers, and so on. Â When Johnson and Krauss meet, they occupy the same chapter, and continue to do so until his death. Â Though the chapters are short (all under 20 pages),Â Walter (my editor) thinks that this method results in losing “sight of one the two protagonists for so long that it’s difficult to stay invested in either of them.” Â Thus, he suggests that even before they meet I include both in the same chapter – doing so will help make clear the connections between them earlier on. Â I suspect he’s right, and (in any case) the only way I’ll know is to follow his suggestion, and see if it works. Â For the record, I think that it will work. Â  Anyway, that’s the next task….