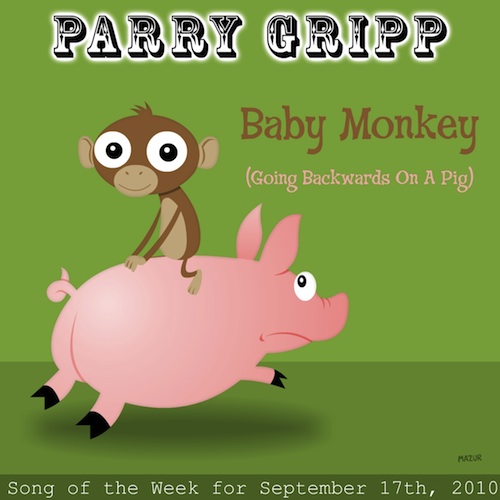 With a hectic new semester about to begin (or, for many of us, already begun) and our new governor’s proposed assault on some of Kansas’ most vulnerable citizens, let us seek solace – and inspiration – in the verse of our greatest living YouTube poet, Parry Gripp. Â As he counsels, when

The world has gone insane

and you don’t know what is right,

you got to keep on keepin’ on:

get on that pig, and hold on tight.

This of course is excellent advice for that baby monkey riding backwards (below).

It’s also sound advice for the rest of us. Â The world does have a tendency to go “insane,” as Mr. Gripp suggests. Â But we must not lose our grip (ha!). Â We must “get on that pig, and hold on tight.”

Gripp‘s tunes offer insight into many other predicaments. Â If you visit his website, you will also find hummable wisdom on the benefits of oatmeal (in your face, cholesterol!), the dangers of excessive self-Googling, and of course the versatility of our good friend the hamster.

In case you’re curious how a baby monkey came to be riding backwards on a boar, this wasn’t staged. Â Both animals were orphaned, and live in the same zoo (in Japan, I think). Â The zoo staff introduced them to one another, and they bonded. Â Here’s the video clip that inspired Gripp’s song and video:

AsÂ aficionados of Gripp know, the “Baby Monkey” song made its debut in September 2010 (not incidentally, also the beginning of a semester). Â And he posts a new song on his site every week. Â So, check there or follow him on Twitter.

But, come what may, don’t let go of that pig!