What does this 4-minute video tell you about this child’s experience of children’s books? Â She offers an inventive retelling of A. A. Milne‘sÂ The House at Pooh Corner, starring Winnie-the-Pooh, Tigger, and… baby monkeys. Â I posed this question to all three of my classes as the first electronic message board post of the term. Â Here’s my answer.

The petite fille is an enthusiastic and inventive narrator, launching the tale with Pooh and Tigger discovering the baby monkeys’ absence. Â As in a fairy tale, her narrative’s emphasis is on plot. Â Lots of things happen, usually with little regard for setting or the psychology of the characters involved. Â There’s a breathless “And then…” quality to her storytelling. Â Lost in the trees, the baby monkeys see bats, crocodiles, hippopotami, giraffes. Â They (the monkeys, presumably) “had taken a very long trip. They did not even take the train.” Â They meet “frightening trees,” “monsters,” and “ghosts.” Â Later on, the story introduces a witch, the rare clawed mammoth, and even a journey to heaven. Â She does her best to keep the tale full of incident.

The tale’s elements of social realism certainly recall the fairy tale more than Milne’s work. Â They encounter “boxes with animals who are poor” and “without anything to eat.” Â These boxed animals are not only hungry and lost, but fleeing a social order that would like to see them “put in jail.” Â The narrative here evinces an awareness of the indifference with which an allegedly civilized society treats its most vulnerable citizens. Belying the stereotype that children are unsuited for “grown-up” themes, this child shares her concern not only for the poor but for a suicidal hippo – who, belatedly, regrets his death wish. 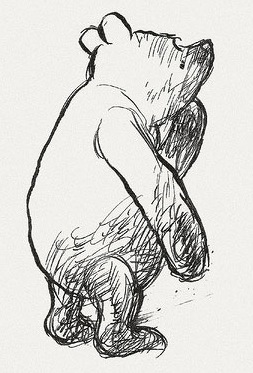 Often, Pooh and Tigger find themselves relegated to secondary characters instead of the starring role they are used to. Â In the second minute of the story, Tigger jumps into the trees, and recovers the lost monkeys. Â Then, he and Pooh head off “into the woods to find some strawberries,” but a witch intervenes – sending the narrative back towards fairy tales once more. Â The witch claims ownership of the strawberries, resulting in a fight. Â A helmet-clad king lion – bearing both sword and shield – rescues them, and Pooh and Tigger again slide back into the role of supporting players.

Our young narrator’s sense of audience is key. Â She not only responds to the woman’s (her mother’s?) prompting, but even brings her into the story: “There was a lady who had a ring like yours but different,” she reports. Â (The difference? It’s orange.) Â Enabling a happy ending, this orange ring is also magic, able to kill witches and set the people free.

Incidentally, I deliberately framed the question as “this child” rather than as “children”: I don’t want to suggest that this child speaks for all children. Â Though people are fond of making such statements (“children will love this!” etc.), they’re impossible to support – unless you survey a large group of children, of course, but the sort of person given to such proclamations rarely does. Â Rather, I find this video interesting for what it tells us about one child’s experience of story. Â She’s focused on narrative, audience, and discusses subjects that might give some grown-ups pause. Â The entire performance resembles a fairy tale as told by Edward Lear. Â Sure, we’re missing the Quangle Wangle. Â But that’s OK. Â We’ve got nonsense, magic, and baby monkeys!

Source of Pooh image:Â Original Winnie The Pooh illustrations on auction at Sotheby’s