“The products are packaged in a way that makes them indistinguishable from candy,” said Donna Viverette, the department’s tobacco prevention coordinator. “That’s an issue if they end up in the hands of children.”

I suppose it was inevitable. Â To entice children to try their product, cigarette companies have used cartoon characters (Joe Camel) and hip accessories (Marlboro Gear). Â Why not take the next logical step and disguise nicotine as candy? Â One wonders why they’ve waited so long to do this. 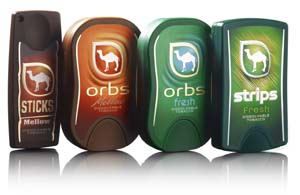 R.J.Reynolds company spokesperson alleges that no, of course they wouldn’t market their product to children. Â However, these “dissolvables” look and taste like candy — specifically, like chocolate mint. Â They come in attractive packages that can be easily hidden in a shirt pocket. Â Which, of course, is precisely the idea. Â Children can get hooked on these candy-flavored tobacco sticks, and easily conceal the package. Â Clever.

And, of course, vital for the industry. Â If it hooks a smoker at a young age, then a tobacco company can sell so much more of its product — until, of course, the smoker dies. Â But death takes years! Â And young people tend to be more susceptible to marketing. Â So… tobacco companies have long tried to lure the young user. Â It’s good for business.

But disguising nicotine as candy? Â Even for an industry not known for any sense of shame, this approach seems particularly brazen. Â As Harvard School of Public Health Professor Gregory N. Connolly (the lead researcher on a study of these products) said, “Nicotine is a highly addictive drug, and to make it look like a piece of candy is recklessly playing with the health of children.”

In the same New York Times article from which the above quotation comes, R.J. Reynolds spokesman David Howard says that it’s unfair to single out these candy-like tobacco products for criticism: after all, many households contain products dangerous to children. Â Mr. Howard explains, “Virtually every household has products that could be hazardous to children, like cleaning supplies, medicines, health and beauty products, and you compare that to 20 to 25 percent of households that use tobacco products.” Â ButÂ Dr. Jonathan P. Winickoff, Harvard medical professor, offers a sharp, pithy response to Mr. Howard’s sophistry: “The difference here is that kids potentially will be watching grown-ups ingesting these products. The last time I checked, we don’t have adults drinking toilet bowl cleanser in front of their kids.”

Well, not until R.J. Reynolds finds a way to market a delicious, sweet toilet-bowl-cleanser drink. Â And, given the company’s new candy-flavored nicotine, I wouldn’t put anything past them.