The good news. I’m making progress, and –Â currently up to Chapter 20 (of 28) – have cut far more (already) than I did on the last round of revisions.Â  I have a clearer sense of The Purple Crayon and a Hole to Dig: The Lives of Crockett Johnson and Ruth Krauss (UP Mississippi, June 2012). Â I can better see what belongs in the manuscript and what can be safely trimmed.Â  I’m happy with what I’ve cut: I think the omissions make the book stronger.Â  Since making these revisions have required me to read the manuscript very closely, I’ve also refined the prose here and there.

The bad news.Â  This is extremely painstaking work.Â  Sometimes, I have to read a paragraph many times in order to figure out what goes and what stays.Â  This evening, Karin kindly helped me work through Chapter 18 –Â which was great, because it can be hard for me to see when something could be trimmed or isn’t working as well.Â  And, to be perfectly frank, though I am doing my best, I cannot see my way to getting the manuscript down to the 125,000-word compromise my editor and I agreed on.Â  If that 125,000 words included only the main text and the notes, well… then I’d be coming close.Â  But it doesn’t –Â it includes the whole thing, including the massive bibliography.

Here’s something I struggled with cutting –Â largely because I like the image of Dave (Crockett Johnson) driving his tan Austin, racing the river.Â  The incident, cut from Chapter 14, takes place on a vacation that he and Ruth took with filmmaker Gene Searchinger and his wife Marian, c. 1950:

Gene was fascinated by Nova Scotia’s tidal bore: When the tide comes in to the Bay of Fundy, it temporarily reverses the river’s direction as the ocean surges upstream. Having brought his movie camera, Gene decided to film it, with the idea of showing it on Today. To give a sense of just how fast the water moved, Gene filmed Dave driving along the edge of the river, glancing over his shoulder to see if he could keep up with the surging current. The footage never aired, but (if it has not been thrown away) somewhere in NBC’s vaults is film of a tall bald man, in a tan Austin, racing the river.

I cut it because there’s another, more telling anecdote from the same holiday.Â  And, though this image makes me happy, it doesn’t advance the narrative.

Some of the easiest things to cut have been items that, though too detailed for the bio., are not too detailed for The Complete Barnaby (Fantagraphics, 5 vols., 2012-2014).Â  So, those items will appear in the Fantagraphics volumes.Â  Johnson’s etymology of “Cushlamochree!” (Mr. O’Malley’s signature expression) will not be in the bio., but it will be in The Complete Barnaby, Vol. 1. 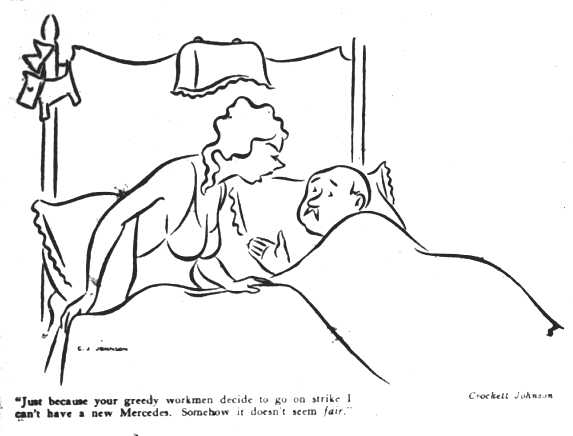 I cut the paragraph below from Chapter 4 because it struck me as too technical, and because I’d already spent time in this section on Johnson’s New Masses cartoons.Â  Though I like this, it just seemed too much for this point in the book:

Stylistically, Johnson has not yet arrived at the Otto Soglow-esque minimalism for which he is famous. Although the detail is less abundant and the lines more fluid than his earliest work, these lines display more dramatic variations in thickness – beginning thin at an end, and then inflating to show the shadow of an elbow or to accentuate the nape of the neck, before slimming back down to a point. Unlike Crockett Johnson’s characteristic style, these lines often do not close, instead just suggesting the boundaries of a figure. The faces of those whom he satirizes even include elements of caricature. These features bring his early cartoons nearer to that of his contemporary Al Hirschfeld. Johnson lacks Hirschfeld’s delight in rendering minutiae, and uses a lesser degree of exaggeration, but there is an edge that softens in Johnson’s later, characteristic style – a style which would emerge in just a few years, and which he would not alter for the rest of his career.

This next bit comes from Chapter 5, just after Ruth Krauss has arrived in London, c. 1938-1939.Â  Ruth did not plan this trip particularly well.Â  She met Elwyn (named below) on the ship over, and he introduced her to the woman with whom she would stay in London.Â  Here’s a little more about Elwyn, whom she elsewhere describes as “dopey”:

On her second day in London, Elwyn introduced Ruth to “another guy,” whom invited Ruth to call.Â  When she reached his house and rang the bell, his landlady stuck her head out of the window.

Ruth asked for her tenant.

The landlady replied, “You’re well out of it, me girl.Â  They’ve come and took ’im in the night!”

Via some other friends, Ruth later investigated this claim, and it was true: the police had taken him, though “unjustly.”

Before Elwyn could introduce her to other questionable young men,

The narrative then picks up with Ruth’s bicycle trip, which I have included.

I’d planned to post more cuts, and to do so more frequently, but these revisions – and other tasks –Â are proving so consuming that I’ve had little time for the blog.Â  As ever, thanks for reading.Â  Look for the bio. of Johnson and Krauss in about a year’s time!

The patient and the masochistic may enjoy other entries in the Interminable Editing ofÂ The Purple Crayon and a Hole to Dig: The Lives of Crockett Johnson and Ruth Krauss: