Q: Are there good “summer” songs omitted from these four mixes?

A: Yes, of course there are. Â I came up with an additional 133 songs that I did not use.

Q: Will you assemble more mixes including those songs?

Q: Beyond “Summertime,” does each mix have any additional theme or mood?

A: Yes. Â The first three are all uptempo. Â The fourth is more midtempo, even quiet, and contains the highest proportion of melancholic songs. Â So, if you want something a little more calm, head for the fourth one.

Summertime, vol. 1: Let’s Get Away from It All 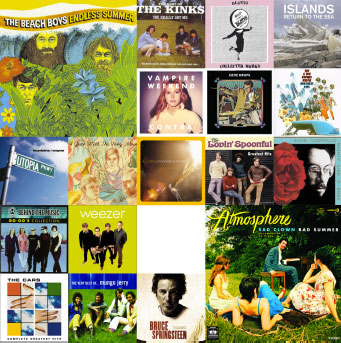 Named for a line in a T.S. Eliot poem, this band had its biggest hit with this song. Â Shaggy also recorded a hit version of this in the mid-1990s

Written by Irving Berlin for the musical As Thousands Cheer, where it was performed by the great Ethel Waters – whom you hear in this recording, backed by Bunny Berigan and Benny Goodman.

Composed by the crack songwriting team of Brian Holland, Lamont Dozier, and Edward Holland Jr., this song was a top ten hit in 1963.

“To go away on a summer’s day never seemed so clear.” From Vampire Weekend’s Contra.

“Let’s take a kayak / To Quincy or Nyack” or, no, “Let’s take a powder / To Boston for Chowder.” Â Love the couplets, and the band’s shouted responses to Anita O’Day’s vocals. Â “Let’s take a trip to Niagara. / This time we’ll look at the falls.” Band replies: “What? No romance?”

From A Year with the Very Most.

I first heard this song on the Dr. Demento Show. Â MTV also played it, back in the early days of the network.

From Islands’ Return to the Sea.

“And the sun keeps shining ’til it’s dead and gone. / And it must be summer ’cause I can’t go on.” Â Power pop with melancholic lyrics. Fountains of Wayne’s new record, Sky Full of Holes, is due out later this summer.

“I feel glad in my own suspicious way.”

In the U.S., this song and their cover of “Venus” were this group’s biggest hits, but they had more chart success in their native U.K.

Covered by T. Rex, Blue Cheer, and many others – but here’s the original. Â For a guy who only lived to be 21 years old, Eddie Cochran had a remarkable impact on popular music. Â In particular, check out his “Somethin’ Else,” “C’mon Everybody,” and “Nervous Breakdown.” 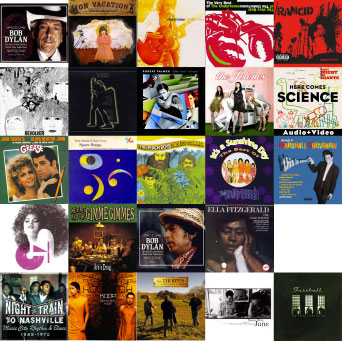 You’ve probably heard They Might Be Giants’ cover of this, but have you heard the original? Â It appears on Space Songs, one of several educational records Tom Glazer cut in the late 1950s.

Turns out scientists now know more about how the sun works. Â For their album Here Comes Science, They Might Be Giants updates “Why Does the Sun Shine?”

From the Swedish duo Koop. Â Appears on their album, Waltz for Koop.

Music and lyrics by Irving Berlin.

“I take a walk, the sun is shining down. / Burns my feet as they touch the ground.” From Revolver.

“Can’t you dig the sunshine?” This ersatz pop group perform this song on a talent show (on their own hit TV series, The Brady Bunch), and place third. Hmm. Â I guess the judges had no appreciation for camp.

From the duo of Bill DeMain and Molly Felder (a.k.a. Swan Dive), a bit of happy summer pop. Â I knew Bill when I lived in Nashville. Â He once made me an incredible mix tape of Italian film soundtrack music. Â Someday, I should try to recreate it on CD — it was (and remains) one of my favorite mixes.

The opening track from Electric Warrior, the record that brought you “Bang a Gong (Get It On).”

Love the ESL nonsensical lyrics in this – a cover of the first track from the Violent Femmes’ self-titled debut.

From Ella Fitzgerald’s The Cole Porter Songbook, Vol. 1 – which I recommend to any fans of Fitzgerald or Porter.

This “supergroup” (the late Robert Palmer, Chic’s Tony Thompson, and Duran Duran’s John Taylor and Andy Taylor) also had a hit with a cover of T.Rex’s “Bang a Gong.”

With music by George Gershwin and lyrics by Ira Gershwin and DuBose Heyward, this song from Porgy and Bess gets a punk make-over. Â This version appears on Me First and the Gimme Gimmes’ Are a Drag — all covers of show tunes.

Punk legends who really should be better known than they are. Â If you’ve never heard their “Teenage Kicks,” you’ll want to go and listen to it. Â Now.

I’m a devotee of cover versions and I’ve heard the Van Halen rendition of this song, but I’ve yet to hear a recording that beats John Brim’s original. Â And yes, Mr. Brim is talking about what you think he’s talking about.

Unlike the last song, this one — as far as I’m aware — is just about ice cream. Â I mean, I’m aware that one could perform it to bring out other meanings. Â But, in this rendition, it sounds quite literal (to me, at any rate).

Juneteenth (celebrated June 19th) commemorates the ending of slavery, and is recognized in most but not all U.S. States.

From the album of the same name.

Powerpop from Fastball’s The Harsh Light of Day.

Is Sheryl Crow’s “friend the Communist” (in the first line of this song) the “vending machine repair man” who is “high on intellectualism” (in her “Everyday Is a Winding Road”)?

Such a lovely song from the late Bobby Hebb.

From the film version of the musical Grease.

“Take the bus downtown to the graveyard shift tonight.” From Rancid Indestructible.

Known for his sole hit “Someday, Someway,” Crenshaw deserves a larger audience. Â By way of introduction, I recommend This Is Easy: The Best of Marshall Crenshaw.

The Thorns are: Matthew Sweet, Pete Droge, and Shawn Mullins. Â Or I should say “were” – they did one album (and a tour)… but that’s it. 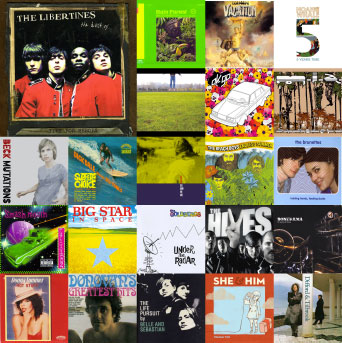 The theme to National Lampoon’s Vacation.

Written by Kimberley Rew, who was also a member of the Soft Boys.

Mmmm. Â Power pop. Â From the Goldbergs’ Under the Radar.

From the collection Endless Summer, but originally released on Surfer Girl.

Everyone knows Dick Dale’s version of “Misirlou,” but he cut a number of other great surf rock tunes – such as this one.

Led Zeppelin, as rendered by the trombone-tastic sounds of New Orleans’ Bonerama.

I confess that I debated putting on Mel Torme’s cover of this on instead of Donovan’s original. Â It’s just as silly, but Mel knows how to bring the kitsch.

From Give It All Away.

From Volume 2, which is just as great as Volume 1. Â Save time: get them both.

This is the first song I heard by Sri Lankan rapper M.I.A., now best known for her “Paper Planes.” During a visit to Kansas, Scott McCloud introduced me to her work.

From The Black and White Album.

From their reunion record, In Space. Â Unless there are unreleased recordings lying around, this is also their last record (frontman Alex Chilton passed away last year).

From the band’s self-titled debut album.

From X’sÂ See How We Are.

The first song I heard by Noah and the Whale, but they’ve many other memorable tunes: “L.I.F.E.G.O.E.S.O.N.” and “Tonight’s the Kind of Night” are upbeat, “Blue Skies” is melancholic.

“You picked me up for a long drive. / We took the tourist route. / The nights are light until midnight.” From Belle & Sebastian’sÂ The Life Pursuit.

“Now you’ve had your fun / Under an air-conditioned sun.” Â From Beck’sÂ Mutations.

Exactly what it says — the sounds of an ice cream truck. 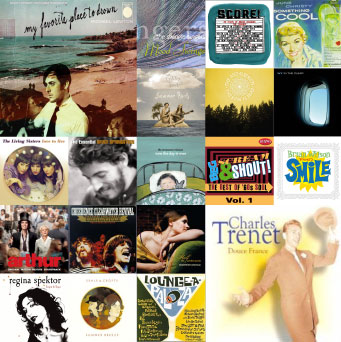 Jasmine is in their minds. Â And it is blowing.

You probably know Frank Sinatra’s recording, but I prefer this one. Â From Peyroux’s Half the Perfect World.

From the new Arthur soundtrack — one of two contributions by Death Cab front man Ben Gibbard.

The Ditty Bops’ new album, Love Letters, is due out soon. It’ll be their first since Summer Rains — the title track of which is represented here.

A top ten hit in early 1971, from the Credence album Pendulum (also on Chronicle, of course).

“And you were waking / And day was breaking / A panoply of song.” From the band’s latest, The King Is Dead.

From The Wild, The Innocent, and the E-Street Shuffle.

From In the Clear, Ivy’s last album. Â The group’s new album, All Hours, is due in September.

“Give the ocean what I took from you so one day you find it can find it in the sand / And hold it in your hands again.” Â From Score!: 20 Years of Merge Records.

“If you’ve forgotten what I’m naming, / you’re going to long to reclaim it one day, / because that summer feeling’s gonna haunt you one day in your life.”

From her Begin to Hope.

From the group’s Now the Day Is Over. Â Not sure who recorded this song first, but Blossom Dearie cut a version on her album of the same name (1959).

“I don’t ordinarily drink with strangers. Â I most usually drink alone. / But you were so awfully nice to ask me, and I’m so terribly far from home.”

From the delightful collection of covers, Lounge-a-Palooza. Â Does anyone know what Soundgarden thinks of this version?

In 2004, Wilson finished the legendary Beach Boys Smile record (1966-1967) – parts of which appear on Smiley Smile and on Beach Boys compilations.

From the group’s album Mood Swings.

With new English lyrics by Jack Lawrence, this tune – retitled “Beyond the Sea” – became a hit for Bobby Darin in 1959. Â I prefer Charles Trenet’s original.