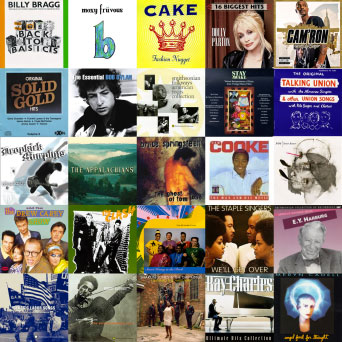 Today, the first of three Labor-Day-themed posts.Â  Here’s a mix of songs about work.Â  And, yes, I’m aware that many other songs that could be included here –Â I came up with enough additional songs to fill a second CD, and then some.Â  Since much of this blog is devoted to children’s literature, I should also note here that a couple of the songs later in this mix have lyrics that include obscenity (mostly f-bombs):Â I’m thinking specifically of Cake’s “Nugget” and Cam’ron’s “My Job.” Â To begin the mix, here’s a song from the start of the Great Depression….

Probably the best-known song by West Virginia singer, songwriter and fiddler Blind Alfred Reed (1880-1956).Â  Ry Cooder recorded it on his self-titled debut album (1970), and Bruce Spingsteen recorded a revised version of it for the reissue of his We Shall Overcome: The Seeger Sessions (subtitled American Land Edition in this version).Â  Springsteen retained only the first verse from Reed’s original; new verses address the failed government response to Hurricane Katrina.

To give you a sense of how popular this song was, two versions were hit singles in 1932 –Â one recorded by Crosby and the other by Rudy Vallee.Â  With music by Jay Gorney, E. Y. “Yip” Harburg’s lyrics tell of working people abandoned by the country they helped to build, and for which they fought.Â  During the third year of the Great Depression, the message resonated with the public. Harburg may be better-remembered today for “Over the Rainbow” (and other songs from the 1939 MGM Wizard of Oz), “Old Devil Moon” (and other songs from the musical Finian’s Rainbow), or for “It’s Only a Paper Moon,” but this is one of his most powerful lyrics.

An idol of Bob Dylan and sometime member of the Almanac Singers, Woody Guthrie (1912-1967) here sings in support of Henry Wallace, Progressive Party candidate for President in 1948.Â  As the liner notes to Hard Travelin’: The Asch Recordings Vol. 3 (on which this song appears) tell us, Guthrie “was certain that if farmers and laborers joined together they could elect Wallace; they didn’t.”Â  Guthrie is best-remembered today for his “This Land Is Your Land.”Â  Of songwriting, he once said:

A #1 hit in 1958, the Silhouettes‘ “Get a Job” has an upbeat sound that masks the more serious subject matter –Â unemployment.Â  As the song’s protagonist says, his girl is “tellin’ me that I’m lyin’ about a job that I never could find.”Â  The band Sha Na Na took its name from the backing vocal.

Another pop hit (#2 on the U.S. pop charts), this one about prison labor.Â  Written by Cooke (1931-1964), the song is said to be inspired by his encounter with a chain gang.Â  Cooke’s biggest hits –Â “Wonderful World,” “Cupid,” “Twistin’ the Night Away,” “You Send Me” –Â tend to address more conventional pop-music subjects.Â  But “Chain Gang” and the posthumously released “A Change Is Gonna Come” display Cooke’s social conscience.

Co-written by Ray Charles and Ricci Harper, “Them That Got” features a tenor sax solo by David “Fathead” Newman.Â  The song reached #10 on the R&B charts and #58 on the pop charts.

“He hands you a nickel, he hands you a dime. / He asks you with a grin if you’re having a good time. / And he fines you every time you slam the door.”Â  From Dylan‘s album Bringing It All Back Home.

Co-written by Dorsey and Alvin Toussaint, “Working in a Coal Mine” was Dorsey’s second top-10 hit and remains his best-known song.

The Staple Singers ask when African-Americans will be paid for their contributions to the United States.Â  From the group’s We’ll Get Over.

The half-sister of Pete Seeger and an accomplished folksinger and songwriter herself, Peggy Seeger sings of how gender discrimination prevents women from getting the jobs (and salaries) they seek.Â  Compelling narrative, strong message.

Joe Strummer sings about jobs he doesn’t want to do.Â  “Career opportunities are the ones that never knock. / Every job they offer you is to keep you out the dock.”Â  Co-written by Strummer and Mick Jones (who actually had worked a government job opening letters to make sure they didn’t contain bombs), the song appears on the Clash’s self-titled debut album.

One of Dolly Parton’s three #1 country hits in 1980, this was also a #1 pop hit that year.Â  It inspired the successful film of the same name –Â which starred Parton, Jane Fonda, and Lily Tomlin.

Bragg covers Leon Rosselson’s song about the Diggers, English agrarians (1649-1650) who sought to establish a more egalitarian society whose members could farm the common land for their mutual benefit.

In his cover version, Waits recasts the song as a minor-key lament, reminding us that those dwarves in Snow White were in fact miners. And mining is a tough job.Â  From Stay Awake: Various Interpretations of Music from Vintage Disney Films.

The African-American a cappella group delivers a beautiful, incisive song about jobs that endanger the worker’s health.Â  From Sweet Honey in the Rock’s Breaths.

One of the greatest bands of the 1990s perform a song from their The B Album (1996), a collection of b-sides & rarities.Â  These guys were truly fantastic live.

From Cadell’s Angel Food for Thought, which featured “The Sweater” –Â a top-40 hit in Canada, and a college radio hit in the U.S.

Inspired by John Ford’s film adaptation of John Steinbeck’s Grapes of Wrath (novel, 1939; film, 1940), Springsteen‘s song paraphrases Tom Joad’s speech near the end of the film.Â  Joad, played by Henry Fonda, says:Â  “I’ll be all around in the dark. I’ll be everywhere. Wherever you can look, wherever there’s a fight, so hungry people can eat, I’ll be there. Wherever there’s a cop beatin’ up a guy, I’ll be there. I’ll be in the way guys yell when they’re mad. I’ll be in the way kids laugh when they’re hungry and they know supper’s ready, and when the people are eatin’ the stuff they raise and livin’ in the houses they build, I’ll be there, too.”

“They cut you from their bloated budgets like sharpened knives through Chicken McNuggets.” Â From Cake‘s Fashion Nugget.

According to Classic Labor Songs (Smithsonian Folkways, on which this song appears), “Californian Jon Fromer has spent a career working in television and radio.Â  He is an active officer of the American Federation of Television and Radio Artists and the Communications Workers of America…. He is a member of the Freedom Song Network, an organization of San-Francisco-area musicians dedicated to social change.”

The song from which this mix takes its title.Â  Appears on the Dropkick Murphys’Â Blackout.

“It’s the flight of the salesman, death of the bumblebee, nothing left for the attorneys and the tumbleweeds.” A song about the Great Recession, featuring a rap from one of the best lyricists working today: Dessa.

“Money. Where have you gone?”Â  On I Learned the Hard Way, Sharon Jones & The Dap Kings contribute another song to the music of the Great Recession.