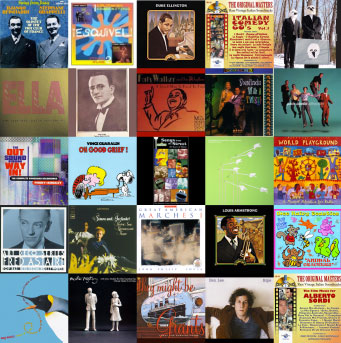 Yes. Â Spring is here, which means flowers blooming and (for academics, at least) the rapidly accelerating roller-coster that is the second half of the semester. Â It is thus time for some jaunty music. Â Enjoy!

How is it that this song is not more widely known and recorded? Â “I’ve looked the universe over from Wack-a-nac-sac to Dover,” and… I’m aware of only two recordings: this one, and one by Peter Mulvey. Â This is one of my favorites because, well, how can you listen to this and not smile? Â Although I expect this song is on more than one compilation, the only place I’ve found it is Fats Waller‘sÂ The Middle Years Part 2 (1938-1940). Â The song’s composers areÂ Al Hoffman (best known for co-writing “Mairzy Doats”), Al Goodhart (co-wrote “Fit as a Fiddle”), and Manny Kurtz.

Another favorite that always makes me happy. Â The original Italian version of the song (1880, music by Luigi Denza, lyrics by Peppino Turco) commemorated the opening of the first funicular cable car up Mount Vesuvius. Edward Oxenford’s English lyrics retain the cheeriness but not the meaning of the original. Â This song appears in more than one compilation, but it comes to you here via the Mills Brothers‘ The 1930s Recordings Volume 5.

Confession: that Target ad introduced me to the Delta Rhythm Boys, whose sound seems to fall in between the Mills Brothers and doo-wop.

The Delta Rhythm Boys are a jump-blues vocal group. Â They performed in the U.S. in the 1930s and 1940s, but in the 1950s moved to Europe, where they remained for the rest of their careers. Â Perhaps this is why the group is not as well-known in their native country, and why the CDs I could find mostly seem to have been produced in Europe.

Is there a more perfect doo-wop number than the Chords’ “Sh-Boom”? Â The Crew Cuts’ cover (released the same year) sold more copies, but nothing matches the original version. Â This was the Chords’ sole hit. Â Below, an a capella rendition, and further evidence that all popular culture will eventually end up on YouTube.

This one’s in French, but includes lots of imitations of animals. Â Silly and fun, from the vocalist best known (in the U.S.) for “La Mer” – the song performed (in English) by Bobby Darin as “Beyond the Sea.”

Delightful pun. Â It’s the sort of song that, I think, should be sung on playgrounds everywhere. Â Indeed, it sounds like it’s an older song, but I think the group wrote it. Â Comprised of Kelly Hogan and two members of the Mekons, the Wee Hairy Beasties are a supergroup of sorts. Â This track appears on their first record, Animal Crackers.

Crosby sang this song in the film Going My WayÂ (1944). Â Written by Jimmy Van Heusen and Johnny Burke, it won the Oscar for Best Original Song. Â I like the arrangement on the record better than that in the film (below), but the movie is notable for its inclusion of a racially integrated boys’ choir.

For a few years in the late 1990s and into the first decade of the 2000s, Paris Combo put out some great records. Â Then,… they stopped. Â I don’t know why. Â I do know that they’re currently on tour. Â Perhaps there’ll be new recordings soon? Â There are some new demos on their website — so, I’m hopeful. Â This particular song appears on their album, Attraction (2001).

This extremely catchy song is from the band’s first LP, Are You Ready for the Heartache Because Here It ComesÂ (2007). Â That record contains a number of finely crafted pop songs, but this is my favorite. Â After a few years of silence (at least in terms of new releases), Murder Mystery put out a new EP earlier this year: Problems.

One of theÂ classic records to feature scat-singing, an art at which Ella Fitzgerald excels. Â Her ability to use her voice as an instrument, improvising solos and syllables … is truly astonishing. Â For more great scatting, check out her “Oh, Lady Be Good” (Decca, 1947), “Cotton Tail” (1967, on The Concert Years 1953-1967), and the great “Mack the Knife” (1960, on The Complete Ella in Berlin). Â The box set Twelve Nights in Hollywood is also well worth your while. Â This track appears on Ella: The Legendary Decca Recordings.

From the album Good News for People Who Love Bad News.

The song that inspired the title of Seth’s It’s a Good Life, If You Don’t WeakenÂ (1996). Â  Lyrics by Leo Robin, music by Richard Whiting and Newell Chase.

Composed by Jimmy McHugh and Dorothy Fields, this song can be found in versions by Count Basie, Dave Brubeck, Nat King Cole,Â Billie Holiday, Ella Fitzgerald, Tommy Dorsey (with the Sentimentalists), and Dinah Washington. Â Louis Armstrong’s recording is one of the earlier versions — the song made its debut in a 1930 Broadway musical.

“Hello, lamppost. What’cha knowin’?” Â One of Paul Simon‘s more whimsical compositions, this appears on Simon and Garfunkel’s Parsley, Sage, Rosemary and Thyme (1966). Â Below: Simon and Garfunkel on the Smothers Brothers Comedy Hour in 1967.

I first heard this song (whistled) as the theme to the Harlem Globetrotters Popcorn Machine, which aired on Sunday mornings from 1974 to 1976. Â Django Reinhardt & StÃ©phane Grappelli’s rendition reaches you here via the compilation Swing from Paris: The Quintette of the Hot Club of France (ASV/Living Era).Â Music composed by Ben Bernie and Maceo Pinkard. Â Kenneth Casey’s lyrics do not appear in this rendition.

From the soundtrack to the film of the same name. Â Appears onÂ The Original Masters: Italian Comedy 60’s, Vol. 1

Continuing the theme of Italian film soundtracks from the 1960s, here’s one of the greatest Morricone tunes. Â It appears in the film of the same name, and is on many compilations. Â But it comes to you here viaÂ Cocktail Mix Volume 4: Soundtracks With a Twist!

You know it as the theme to Monty Python’s Flying Circus, but this John Philip Sousa piece is an American military march composed in 1893.

Returning to Italian film soundtracks from the 1960s, here’s the title song from the film of the same name. Â This track appears onÂ The Original Masters: The Film Music For Alberto Sordi.

“It makes no difference if it’s sweet or hot. / Just give that rhythm everything you’ve got!” Â Composed by Duke Ellington (music) and Irving Mills (lyrics).

Composed by Raymond Scott but performed by Don Byron and co., this recording appears on Byron’s Bug Music.

Probably best-known today for its appearance in the Austin PowersÂ films, the song made its debut on Jones‘ Big Band Bossa NovaÂ (1962).

On my imaginary radio station, this song was a big hit. Â From They Might Be Giants‘ The Else.

Manu Chao‘s song first appears on his record ClandestinoÂ (1998), but this version comes from the compilation World Playground: A Musical Adventure for KidsÂ (1999).

The greatest cover of any They Might Be Giants song ever appears on Then! The Earlier Years. Â The original version is on TMBG’s FloodÂ (1990).