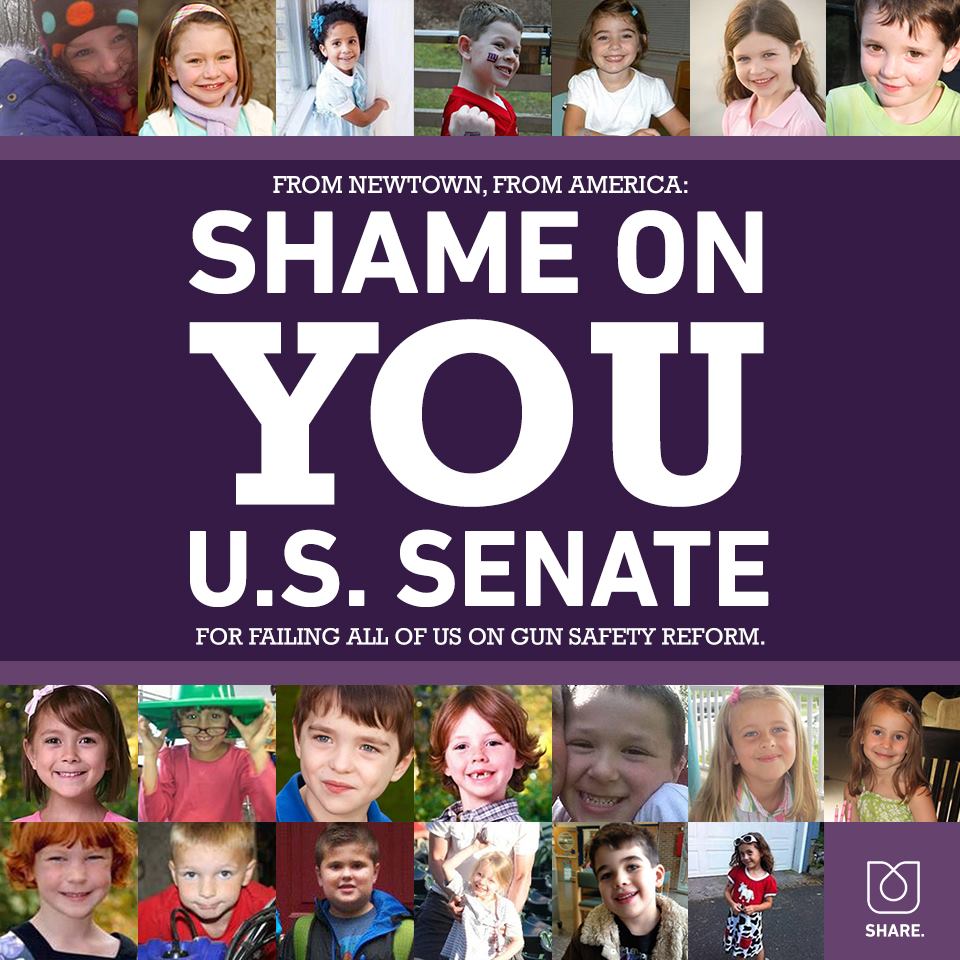 45 U.S. Senators think that massacres like the ones at Sandy Hook and Aurora and Tuscon are acceptable collateral damage. Â They support mentally unstable people’s “rights” to have access to firearms. Â In sum, if you would prefer to live in a country in which children have a better chance of growing up, in which adults have a better chance of staying alive, these 45 U.S. Senators are saying: “No. Guns have more rights than you do. We do not care. People will die. Children will be murdered. Your right to life, liberty, and the pursuit of happiness is less important than allowing criminals and the mentally ill to have access to firearms.”

If you disagree with this position, here are the Senators you will want to vote against during the next election. Â Should you wish to contact them, I have also provided links to their websites. Â I have not listed Harry Reid (D-Nev.) because my understanding is that he voted against it for the procedural reason that, by doing so, he can bring the measure up again. Â If my reading of his vote is incorrect, then please add him to the list.

To any gun enthusiasts who stumble upon this blog post, yes, I am familiar with the Second Amendment to the United States’ Constitution:

A well regulated militia being necessary to the security of a free state, the right of the people to keep and bear arms shall not be infringed.

Three points on the amendment that you might wish to consider:

Having said that, I would be willing to argue for a more liberal interpretation of the Second Amendment, one that includes the rights to own weapons of a more recent vintage, and that expands the reason for owning arms beyond that of a “well-regulated militia.” Â People may want to hunt. Â They may enjoy target practice. Â Though study after study shows that having a gun in the home makes you more likely to be killed by a gun, I realize that many people believe the opposite – and so I certainly would not oppose people owning (and using) a gun for self-defense. Â But military-grade assault weapons? Â No. Â Those ought to be regulated.

A gun is not a toy. Â It is designed to kill. Â If we agree that (for instance) driving a car requires the driver to pass certain tests, then surely we can agree that owning a gun ought to require the owner to pass certain tests. Â Universal background checks (something which 86% of Americans support!). Â No loopholes for guns purchased at gun shows or via the internet. Â No loopholes at all, in fact.

If you vote against sensible legislation (such as legislation that the above list of senators voted against today), then you areÂ personally responsible for the high numbers of gun deaths in the U.S. Â Please note that I say “high numbers of gun deaths.” Â I realize that no law will prevent all murderous people from obtaining guns. Laws do not prevent all people from speeding, or from embezzling money, or from defrauding investors. However, the fact that laws fail to prevent all crimes does not remove the need for having these laws in the first place.

So. Â To the above list of senators, I say: Those who support sensible gun laws know where you stand. Â You think that killing children should be permitted rather than prevented. Â Thank you for making your position clear. Â It will make our choice in the next election very, very clear.