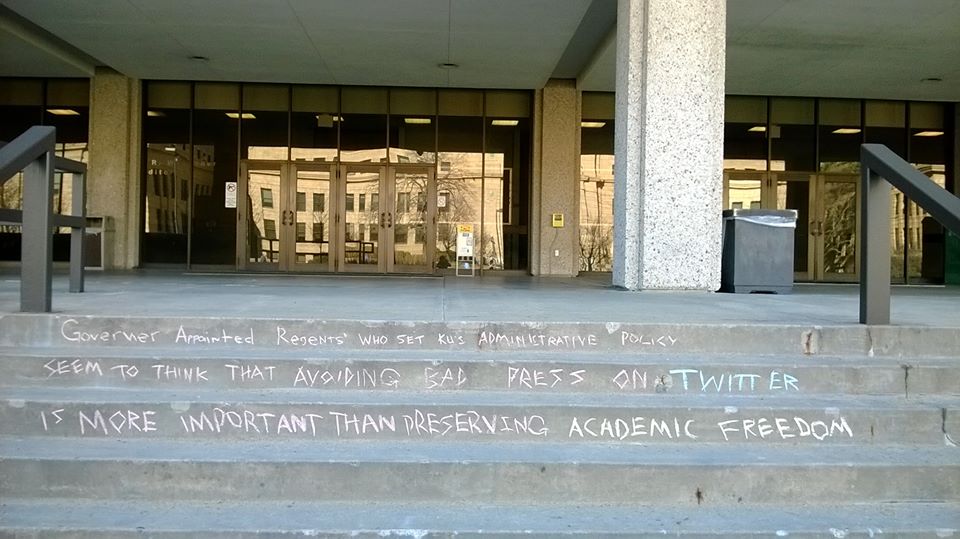 If you’re an employee of a university overseen by the Kansas Board of Regents, all speech expressed through social media (Facebook, Twitter, blog, any website) can be grounds for firing. Employees (faculty, staff, student employees) may not say anything that’s “contrary to the best interest of the university,” nor may they utter something that “impairs discipline by superiors or harmony among co-workers,” or “otherwise adversely affects the university’s ability to efficiently provide services.”

In other words, the Kansas Board of Regents is in violation of the social media policy it created –Â which, conveniently, it is not compelled to abide by. (The Regents have no social media of their own.)Â  The Regents’ attempt to stifle free speech is “contrary to the best interest of the university” because the freedom to express ideas is the cornerstone of academic inquiry. Sometimes debating ideas may “impair discipline” or “harmony among co-workers”: through argument, we clarify our ideas, discover what works, what needs to be refined, and what should be set aside. Such a policy “adversely affects the university’s ability to efficiently provide services” because revoking freedom of speech makes it harder to attract and retain faculty members. It also puts all Kansas universities at risk of losing accreditation. To assess student learning, the North Central Association of Colleges and Schools’ Higher Learning Commission (the accrediting body) asks, “By what means do you create and maintain a climate that celebrates intellectual freedom, inquiry, reflection, respect for intellectual property, and respect for differing and diverse opinions?” As an example of valuing a “life of learning,” the Higher Learning Commission “has approved and disseminated statements supporting freedom of inquiry for the organization’s students, faculty, and staff, and honors those statements in its practices.”

Unless all university employees take a vow of silence, it’s impossible to abide by so broad and all-encompassing a policy.

So, friends, Kansans, and allies of freedom of speech everywhere, join me in a little experiment in civil disobedience. If you’re on Twitter, tweet something and tag it #ksspeech –Â that’s “ks” (the postal abbreviation for Kansas) plus the word “speech.”Â  If there’s still room, tag @ksregents as well. What should you tweet? Anything you like. A quotation. A recipe. A hypothesis. An observation. A pun. Something else.

I will be tweeting one such statement each day until the Kansas Board of Regents rescinds its unconstitutional social media policy. But I don’t see why I should have all the fun. Join me!

The bureaucracy is a circle from which no one can escape. Its hierarchy is a hierarchy of knowledge. #Marx #ksspeech @ksregents – Philip Nel (@philnel) January 29, 2014

To give credit where it’s due, I’ve borrowed the idea of daily tweets from Amy Lara (@AmyLara12), who has been doing this on Facebook, and is now doing it on Twitter as well. Why not join us? If you can’t think of something to say, just RT (retweet) ones that you like. Â You might even MT (modified retweet) someone else’s tweet and add the #ksspeech hashtag.

So many ways to participate! It’ll be fun! If you’d like to be listed as a participant in this experiment, just let me know (via the comments or email) your Twitter handle, and I’ll add it below. If you don’t want to be listed, then say nothing. Thanks!

Update, 12:40 pm, Thursday, 30 Jan.: I thought inviting people to add their name (above) would be a good way of keeping track of support, but a much better measure seems to be all the RTs (retweets) and new tweets bearing the #ksspeechÂ hashtag. Â Here’s a sampling.

“What is freedom of expression? Without the freedom to offend, it ceases to exist.” – Salman Rushdie #ksspeech

I have degrees from 2 KS universities thanks to professors who were allowed to speak freely. #ksspeech http://t.co/GGFGkWnYPY

Kansas requires more paperwork to vote than to buy a gun. Can I say that? #ksspeech @ksregents

I finished a sock at knit night tonight! #ksspeech @ksregents

So many country songs sound more like an exercise in identity politics than an attempt to do something musically new.#ksspeech @ksregents

@ksregents : Muzzling academics’ use of social media is just like muzzling their publications: an assault on academic freedom. NO! #ksspeech

“You have the right to free speech / provided you’re not dumb enough to actually try it.” #ksspeech

Image credit:Â The photograph of KU graffiti comes from Howard Callihan on Facebook, but I learned of it via Kansas Universities Faculty & Staff Against Regents’ Speech Policy (also on Facebook).