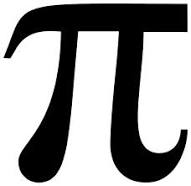 1. The ratio of a circle’s circumference to its diameter: 3.1415926535.  When I was a kid, I memorized the number out to its tenth decimal point. On a long strip of paper, I also wrote the number out to about 100 decimal points. Perhaps I thought that learning this irrational number would grant me some greater insight. Or, possibly, I was intrigued by the fact that this simple ratio would be represented by such an unwieldy and unending number. I’m not sure. But I still have a fondness for Pi (and pie!). For the truly obsessed, here is Pi out to 100,000 decimal points. Here’s Pi Day’s “Learn About Pi” page, the Joy of Pi’s “Pi Facts,” and Wikipedia’s essay.

2. Pi was also important to Crockett Johnson. In his later years, he worked on the mathematical conundrum of squaring the circle – a problem that also intrigued mathematician and children’s author Lewis Carroll, a century earlier. Johnson even published his own original theorem on the subject.

He moved towards this answer, visually. He literally worked out the problem via his paintings, creating many variations on the idea, and ultimately arriving at Squared Circle (1968).

Then, to get the algebraic notation correct, he corresponded with mathematicians, who helped him express his idea in the less visual medium of the formula. It was published in the Mathematical Gazette in 1970.

3. As readers of children’s literature know, this blog takes its name from a scene in Johnson’s Harold and the Purple Crayon (1955), in which the title character “laid out a nice simple picnic lunch.” 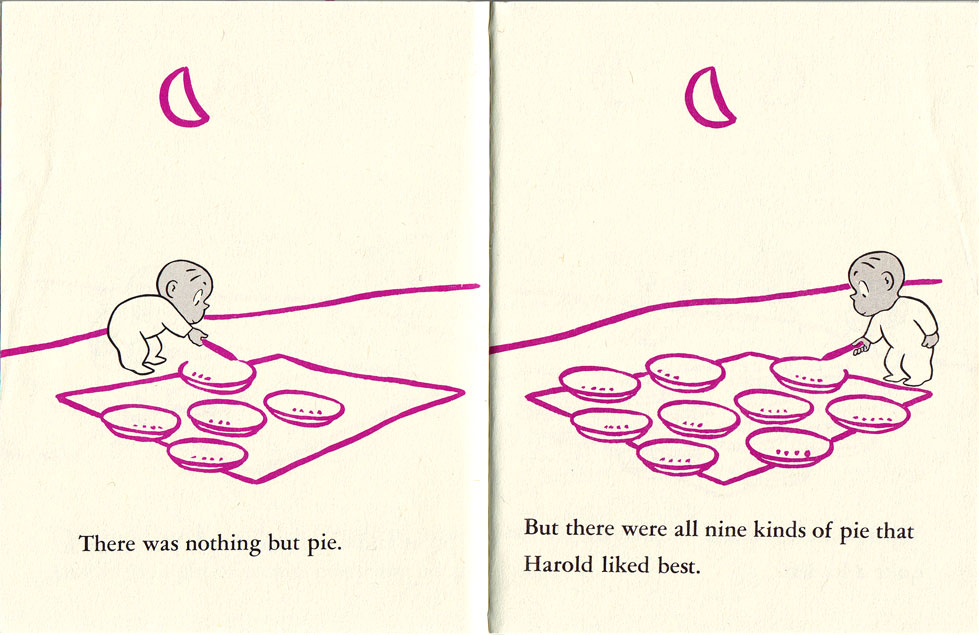 I love the way Johnson’s tone both embraces Harold’s matter-of-fact tone and registers amusement at this claim. On the one hand, the third person narrator (via a literary technique known as free indirect discourse) tells us what Harold is thinking: our narrator is so closely aligned with Harold’s point of view that one could easily swap the pronouns and Harold’s name for “I.” These are Harold’s thoughts. On the other hand, they’re not entirely Harold’s thoughts. Johnson’s deadpan delivery of these lines also underscores the mild absurdity of having nine favorite kinds of pie. That is, there’s also an awareness here that Harold lacks – specifically, that “nine kinds of pie that Harold liked best” is Â funny.

4. Or is it? This somewhat baffling pie chart lists Americans’ 10 favorite types of pie. 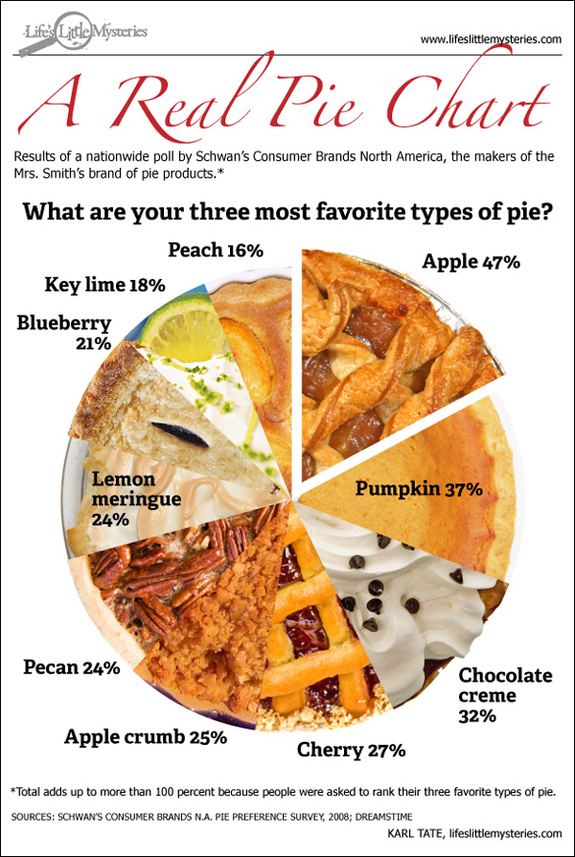 It’s somewhat baffling because the percentages don’t add up to 100 – which is the point of using a pie chart. The circle represents 100%, and then each slice some lesser percentage. But this chart doesn’t. As the chart’s caption explains, the total “adds up to more than 100 per cent because people were asked to rank their three favorite types of pie.” And that still doesn’t make the above chart any more illuminating – though it is pretty to look at.

5. Pies are among those foods that come in both sweet and savory varieties. When I think of pie, my thoughts drift to the sweet (apple, peach, pecan, blueberry), but there are are also savory pies (meat pie, chicken pot pie, potato pie, pizza pie). The Oxford English Dictionary, which finds the oldest use of the word “pie” (then spelled “pye”) in 1304, offers the following as its first definition:

A baked dish of fruit, meat, fish, or vegetables, covered with pastry (or a similar substance) and freq. also having a base and sides of pastry. Also (chiefly N. Amer.): a baked open pastry case filled with fruit; a tart or flan.

6. Care for some Amblongus pie? Since this is (often) a children’s literature blog, here’s a recipe from Edward Lear’s “Nonsense Cookery” (which appears in his Nonsense Songs, Stories, Botany, and Alphabets, 1871).

TO MAKE AN AMBLONGUS PIE

Take 4 pounds (say 4 1/2 pounds) of fresh Amblongusses, and put them in a small pipkin.

Cover them with water and boil them for 8 hours incessantly, after which add 2 pints of new milk, and proceed to boil for 4 hours more.

When you have ascertained that the Amblongusses are quite soft, take them out and place them in a wide pan, taking care to shake them well previously.

Grate some nutmeg over the surface, and cover them carefully with powdered gingerbread, curry-powder, and a sufficient quantity of Cayenne pepper.

Remove the pan into the next room, and place it on the floor. Bring it back again, and let it simmer for three-quarters of an hour. Shake the pan violently till all the Amblongusses have become a pale purple colour.

Then, having prepared a paste, insert the whole carefully, adding at the same time a small pigeon, 2 slices of beef, 4 cauliflowers, and any number of oysters.

Watch patiently till the crust begins to rise, and add a pinch of salt from time to time.

Serve up in a clean dish, and throw the whole out of the window as fast as possible.

For any readers unfamiliar with Lear’s nonsense works,… you’re in for a treat even tastier than amblongus pie and gosky patties. Go read ’em! 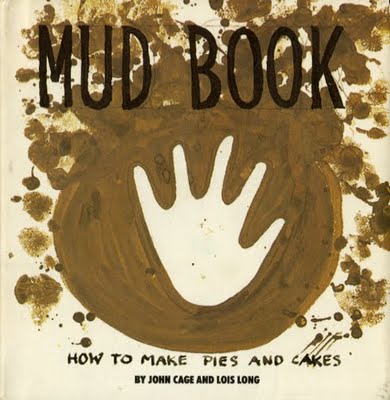 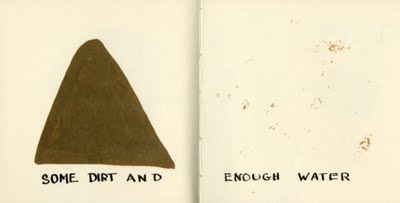 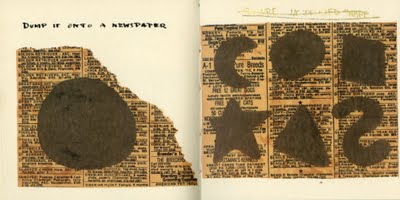 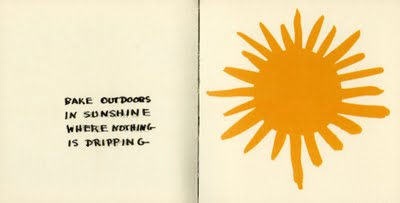 As Lane Smith and Bob Shea write in their post on Mud Book (and my source for these images), “Instructions any child can follow with ingredients easy to obtain. Notably, dirt, rocks, water, dirt and more dirt. But remember, mud pies are to make and to look at. Not to eat.”

8. Michael John Blake’s “What pi sounds like” is my favorite musical interpretation of the number. (It’s also literally a “musical number.” Get it?)

Many others have composed music inspired by Pi. Lars Erikson – composer of the Pi Symphony – even sued Michael John Blake (composer of the above piece), alleging plagiarism. Erikson lost.

If you like it (and if you don’t), you can buy Michael John Blake’s “What pi sounds like” via iTunes.

9. One could make a long list of pie-themed music, too. The earliest one that comes to mind is “Song of Sixpence” (18th century): “Sing a song of sixpence, / pocket full of rye. / Four and twenty blackbirds / baked in a pie.” There’s A. A. Milne’s “Cottleston Pie,” performed here by Rowlf the Dog on the first season of The Muppet Show (1976).

According to an informal and completely unscientific survey of the “pie” songs in my iTunes, pies usually function metaphorically in music. Yes, there are “The Worst Pies in London” (from Sondheim’s Sweeney Todd) and Zoe Lewis’s “Pies for the Public” (from Sheep), but you’re more likely to encounter Don McLean’s “American Pie” (1971), Jay & the Techniques’ “Apple, Peaches, Pumpkin Pie” (1967), the Beatles’ “Honey Pie” (from The Beatles [White Album], 1968),Â David Wilcox’s “Wildberry Pie” (1991), Death Lurks’ “Happiness Pie” (from The Kids in the Hall soundtrack, 1996), or Louis Jordan and Ella Fitzgerald’s “Patootie Pie” (1946).

And what better way to express one’s appreciation for Pi and pie than by baking a Pi pie? 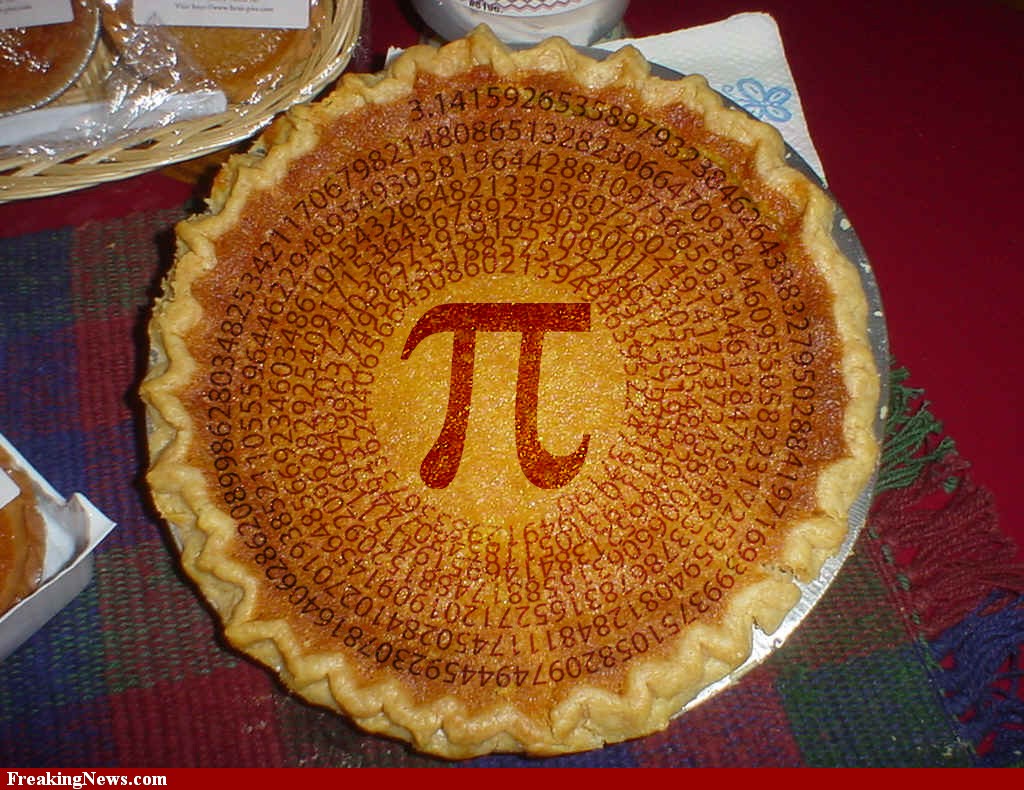 If you want to make one, the Nerdista has a recipe for her Pi pie (pictured below). 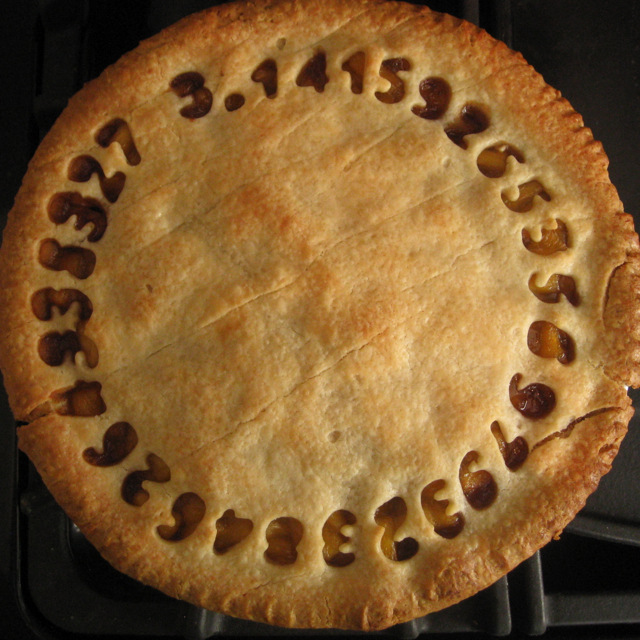 Happy Pi Day! Let’s have some pie. And Pi, of course.