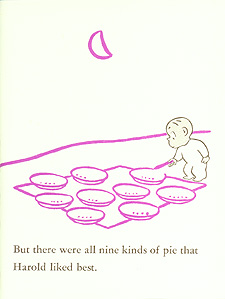 This isn’t the only kind of “pie” that Crockett Johnson was interested in.  In addition to “all nine kinds of pie that Harold likes best,” Johnson also drew inspiration from π (3.14159265…) – the ratio of a circle’s circumference to its diameter.

In early 1968, he began the project of “squaring the circle,” constructing a square with the same area as a circle – but using only a straight-edge and a compass to do so.  This is impossible, but he was either unaware of this fact or undeterred by it.  Not a trained mathematician, Johnson worked his way towards the answer visually.  He painted solutions, testing different theories on his canvas (which was actually mortarboard – canvas intimidated him).

By the middle of the year, he had arrived at a solution:

He painted two versions of this. The other can be found at the Smithsonian’s on-line exhibit, Mathematical Paintings of Crockett Johnson.  I recommend you visit its site for a more complete explanation of the mathematics behind the painting.

Johnson next wrote up an algebraic formula, and sought the opinion of professional mathematicians.  Finally, in 1970, the Mathematical Gazette published his first mathematical theorem, “A geometrical look at √π”:

Johnson would publish his second original contribution to the field of mathematics in 1975, just prior to his death.