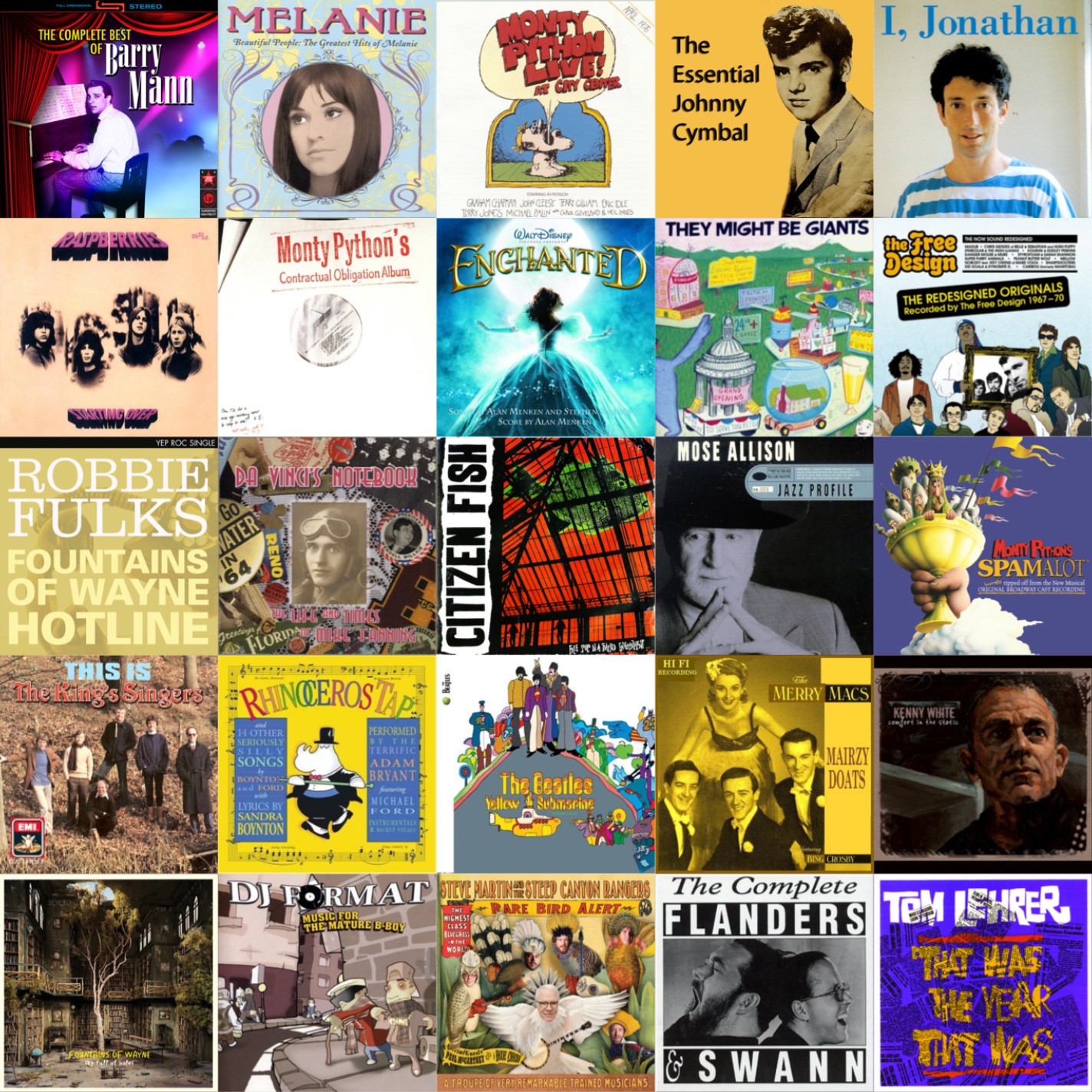 This is the introductory textÂ of thisÂ mix, which, beforeÂ listing the songs (below), offers a few facts about them, such as the sad truth that the Free Design (track 3) had only one moderate hit, “Kites are Fun” (#33 on Billboard’s Adult Contemporary charts, and #114 on the pop charts), or the happy fact that there are three Monty Python-affiliated songs here, one (8) from Monty Python’s Contractual Obligation Album (itself a “meta” title), another (20) from Monty Python Live! At City Center, and yet another (24) from the Original Broadway Cast of Spamalot. These sentences might also point out that since all “Python” tunes feature different performers, the three songs do not violate the mix-maker’s unwritten rule of never including two songs performed by the same artist. However, the rather dull nature of this observation renders it unlikely for inclusion here. Of perhaps greater interest might be the information that the Beatles’ (16) publishing company was “Northern Songs Ltd.,” and that George Harrison wrote this one. Or that, while not actually the shortest song in the universe (12), the track by that name appears on Sandra Boynton’s book-and-CD combo Rhinoceros Tap.

Update, March 2019: since we’re no longer allowed to post mp3s via an interface, I have mostly recreated this mix on Spotify.Â  (It is nearly all of the original mix plus several additional tracks – most of which are mentioned in the paragraph [scroll down!] acknowledging omissions.)Â  Here’s the new version, followed by the original track listing.

It’s highly unlikely that any omitted “meta” songs would be mentioned here, in this concluding paragraph, because that would deprive the listener of the fun of pointing out the mix’s inexplicable failure to include the Axis of Awesome’s “How to Write a Love Song,” Simon & Garfunkel’s “Song for the Asking,” Howard Jones’ “New Song,” Elton John’s “Your Song,” the Four Tops’ “It’s the Same Old Song,” or Sammy Davis Jr. and Dean Martin’s “Sam’s Song,” to name but a few. It’s much more probable that these words would indicate that “Number Three” (15) appeared on They Might Be Giants, They Might Be Giants’ first album (also known as the pink album), or that “A Happy Song” (7) is one of three “Songs for Our Time” on At the Drop of a Hat.

Underlined text, indicating that postsÂ below might be of interest: