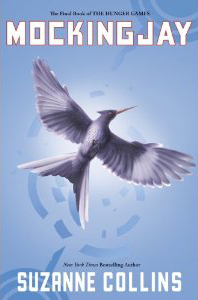 War is hell. Â If General Sherman (and, I expect, many others) hadn’t said it first, I suspect Suzanne Collins might have chosen those three words as a subtitle for herÂ Hunger Games trilogy. Â As its predecessors did,Â Mockingjay dramatizes the physical and emotional consequences of war. Â It’s especially adept at displaying the scars invisible to those of us who either have not been in a war or do not know people who have. The victors of the Hunger Games cannot sleep – as Finnick says, “I drag myself out of nightmares each morning and find there’s no relief in waking” (156). Â They are haunted by what they’ve done, and by what they haven’t done. Â Even if the physical wounds heal, the emotional ones linger. Â Early in the novel, after Gale admits that he’d use a bow and arrow on people if it would keep Katniss safe, she thinks, “I don’t know what to tell him about the aftermath of killing a person. About how they never leave you” (68).Â Like the first two books in series, the third is about trauma.

It is also about torture, which – no matter what your government tells you – is not merely an “enhanced interrogation technique.” Â It’s torture. Â Characters in Mockingjay have been tortured by the agents of Panem, the totalitarian regime against which the Rebels (including our heroine Katniss) fight. Â Appropriately, Collins does not invite us into the scenes of torture. Â She shows us what happens later, how torture’s survivors cope. Â The tortures of Panem are a sophisticated cruelty, a more subtle and more damaging type of the aversion therapy scenes in Stanley Kubrick’s A Clockwork Orange (1971). Â One character has been soaked in water, and then given electric shocks; now, rain, the shower, water of any kind triggers a flashback to that experience. Â Another has been drugged with venom, conditioned not just to doubt but to kill a loved one. Â Damage inflicted on the mind, the novel suggests, is the hardest pain to bear. Â As Katniss says late in the novel, “I can’t believe how normal they’ve made me look on the outside when inwardly I’m such a wasteland” (366).

Though Collins understands why people would feel the need to fight a war, Mockingjay offers a more eloquent defense of pacifism than of, say, a “just war.” Â There’s a line in the book that made me think of the lists of dead troops from America’s current wars, names of people who are almost always younger than I am – people in their 20s, and sometimes as young as 17 or 18. Â To say nothing of the hundreds of thousands of children killed in those wars.Â Â This is the line. Â Considering the “creature” that is a human being, Katniss observes, “something is significantly wrong with a creature that sacrifices its children’s lives to settle its differences” (377).