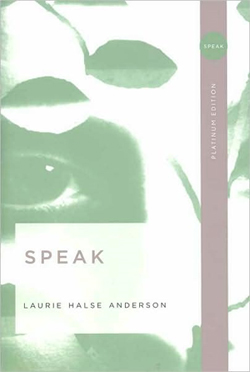 Wesley Scroggins, Associate Professor of Management at Missouri State University, thinks that Laurie Halse Anderson‘s Speak (1999) is “soft pornography.” Â Having read and taught Speak many times, I suspect that Mr. Scroggins either lacks some basic literary skills (such as how to detect tone) or is in need of psychological counseling. As an English professor, I’m not qualified to help with the latter, but I can help him with the former. Â So, Dr. Scroggins, I’m dedicating this blog post to you.

In an editorial printed on Saturday, Professor Scroggins makes the “soft pornography” allegation and then writes the following about Speak:

This is a book about a very dysfunctional family. Schoolteachers are losers, adults are losers and the cheerleading squad scores more than the football team. They have sex on Saturday night and then are goddesses at church on Sunday morning. The cheer squad also gets their group-rate abortions at prom time. As the main character in the book is alone with a boy who is touching her female parts, she makes the statement that this is what high school is supposed to feel like. The boy then rapes her on the next page. Actually, the book and movie both contain two rape scenes.

Professor Scroggins has described some plot elements, but has not discerned the novel’s perspective on those events. Â The above summary is akin to saying of Ray Bradbury‘s Fahrenheit 451 (1953) that it shows firemen as pyromaniacs who start fires instead of putting them out, and burn books, too! Â The book does display these events, but it does so in order to invite us to consider them critically.

Speak‘s narrator, Melinda Sordino, uses a literary technique known as irony. Â When we use irony, we’re deliberately creating tension between a superficial, literal meaning, and a different, deeper, intended meaning. Â If, for instance, I were to speak of George W. Bush’s eloquence or Barack Obama’s pessimism, I would be speaking ironically: the former U.S. president is as famous for his misstatements (“Bushisms”) as the current U.S. president is for his optimism. Â Similarly, Melinda is speaking ironically when she writes, “I think the Merryweather cheerleaders confuse me because I missed out on Sunday school. Â It has to be a miracle. There is no other explanation. Â How else could they sleep with the football team on Saturday night and be reincarnated as virginal goddesses on Monday?” (29). Â Here’s how you can tell. Â First, statements like “It has to be a miracle” and “There is no other explanation” are hyberbole: exaggerated statements. Â Indeed, in context, both are so exaggerated as to make the reader doubt their veracity. Â Second, the second half of the final sentence quoted contradicts the first half: it’s not possible both to “sleep with the football team” and to be a “virginal goddess.” Â Indeed, depending on one’s religious beliefs, it’s doubtful that anyone can be a “goddess” (another example of the hyperbole that engenders doubt). We might characterize the tone (speaker’s attitude towards the object of discourse) as sarcastic. Â Sarcasm (which frequently involves deploying apparent praise as criticism) is a blunt form of irony. Â The combination of hyperbole, contradictory statements, and a sarcastic tone helps us understand that Melinda is speaking ironically here. Â Specifically, she’s criticizing the hypocrisy of a social order that endorses such a double standard in its treatment of women – treating the cheerleaders, as she says in the sentence following the one I quoted, “as if they operate in two realities simultaneously” (29-30). Â Perceiving irony requires the reader to use context to detect tone.

Here, for example, is the context for Melinda’s statement, “This was what high school was supposed to feel like” (134). Â Throughout the novel, Melinda speaks primarily to the reader and says very little to the other characters. Â Just before she began her freshman year of high school, she went to a party, drank beer, and was raped. Â The event traumatizes her. Â She feels shame (survivors of rape often blame themselves), and doesn’t want to talk to anyone about what happened. Â She says, “This was what high school was supposed to feel like” just as she begins to recall the events leading up to her rape. Â A “gorgeous cover-model guy,” a senior whose name she does not know, begins flirting with her, and kisses her. Â A little drunk, she “couldn’t figure out how to tell him to slow down,” but believes that he is attracted to her: “Nearly knocked me off my feet, that kiss. Â And I thought that just for a minute there that I had a boyfriend, I would start high school with a boyfriend, older and stronger and ready to watch out for me” (135). Â In other words, the statement “This was what high school was supposed to feel like” describes her state of mind prior to the senior’s sexual assault. Â Inexperienced with alcohol and inexperienced with dating, Melinda is unaware that the senior’s intentions are anything other than romantic. Â We, the readers, know better. Â We know she is talking about the party where something happened, the party to which she has alluded many times already. Â We know that something painful is about to occur.

And it does. Â Immediately after she expresses the thought that the senior (who, we learn later, is named Andy) will look out for her, the next sentences are “He kissed me hard again. His teeth ground hard against my lips. It was hard to breathe” (135). Â And then “A cloud cloaked the moon. Â Shadows looked like photo negatives” (135). Â Several words here clue the reader into the fact that something is about to go wrong. Â The darkness of the “cloud cloaked” and shadows, and the uncanniness of “photo negatives” convey that Melinda’s experience is taking a dark turn. So, too, does the repetition of the word “hard” (three times) coupled (twice) with sensations of pain or distress: “teeth ground hard against my lips” and “hard to breathe.” Â If you’re more than just functionally literate, you should recognize this.

Dr. Scroggins does not seem to be more than just functionally literate because he classifies the next scene as “soft pornography.” Â If he finds a young girl’s rape to be sexually exciting, then he is in dire need of counseling. Â Indeed, were I his employer, I would remove him from the classroom until he had undergone such counseling: such a man is a potential danger to students and colleagues. Â However, Psychology is not my area of expertise. Â (I earned a B.A. in English and in Psychology, but a Ph.D. in English.) Â So, let us assume that the issue is literacy and not pathology. Â Here is the scene he describes as pornographic:

We were on the ground. When did that happen? “No.” No I did not like this. I was on the ground and he was on top of me. My lips mumble something about leaving, about a friend who needs me, about my parents worrying. I can hear myself – I’m mumbling like a deranged drunk. His lips lock on mine and I can’t say anything. I twist my head away. He is so heavy. There is a boulder on me. I open my mouth to breath, to scream, and his hand covers it. In my head, my voice is clear as a bell: “NO I DON’T WANT TO!” But I can’t spit it out. I’m trying to remember how we got on the ground and where the moon went and wham! shirt up, shorts down, and the ground smells wet and dark and NO! – I’m not really here, I’m definitely back at Rachel’s crimping my hair and glueing on fake nails, and he smells like beer and mean and he hurts me hurts me hurts me and gets up

and zips his jeans

The fact that the next thing Melinda does is call 911 should be a clue that the preceding experience was not meant to elicit desire. Â If it aroused Dr. Scroggins, then let us assume he simply lacks sufficient literacy skils to perceive why this scene is disturbing.

Here’s why it is. Â First of all, it’s a textbook case of rape: Andy (the senior) forces Melinda to have sex without consent. Â He asks, “Do you want to?” Melinda at first does not reply, but then says (at the top of the long paragraph) “No.” Â So, right there: rape.

Second of all, the words Melinda uses to describe the experience convey her pain, Andy’s coercion, and the subsequent trauma. Â She says, “I twist my head away” – a sign of resistance. Â She wants to move but cannot because he is more powerful than she is: “There is a boulder on me.” When she tries to scream, he covers her mouth with his hand. Â These, not incidentally, are also signs of rape. Â Rape is a crime of power, not of desire. Â The moment when she thinks, “I’m not really here,” is a moment of dissociation, common when a person is experiencing trauma. Â Finally, the repeated “hurts me hurts me hurts me” should give Dr. Scroggins and any reader a clue that this experience is not erotic, but painful. Â It’s a crime. Â It’s called rape.

If Professor Scroggins does not know the difference between rape and consensual sex, then he is a criminal waiting to happen. Â If, on the other hand, he simply lacks sufficient literacy skills to read literature, then I hope that this blog posting may be of some help to him.

UPDATE, 9:00 pm. Â There are many other interesting responses to this editorial. Â Here are links to a few of them: