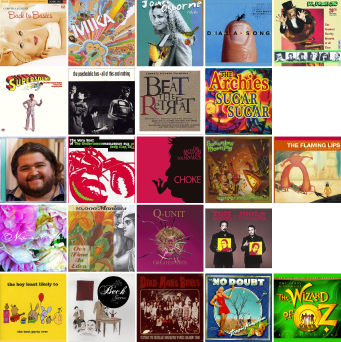 And… here’s the fifth of seven Halloween mixes. Â They Might Be Giants, Tom Jones, Undertones, Flaming Lips, the Archies, and more! Â It’s a very busy week, but I’m going to do my utmost to get these all up prior to the 31st.

Yes, I know that this (and some of the other songs here) are only loosely Halloween-y, but I’m choosing to interpret “walking into spider webs” as apt for October 31st. Â As you probably already know, this is from No Doubt‘s smash hit record Tragic Kingdom.

From the Furs‘Â Mirror Moves, the album that also brought you the songs “Heaven,” “Heartbeat,” and “Here Come Cowboys.”

From the band‘s debut, Nightmare of You.

This song has been recorded many, many times – with many lyrical variants. Â The first may be Fess Williams’ “Gamblers’ Blues” (1927) and the first under a version of the famous title is Louis Armstrong and His Hot Fives’ “St. James Infirmary” (1928). Rob Walker‘s “Name That Tune” (14 June 2005) provides a fascinating history of the song. Â Sarah Vowell’s “The Magical Mystery Tour” (6 Oct. 1999) offers her own reflections on the song, and Pre-War Blues’ “So Young, So Cold, So Fair: The Saint James Infirmary Blues” (10 July 2008) gathers together over 100 versions of the song. Â Check it out!

From the stellar album of Richard Thompson covers, Beat the Retreat.

From the band‘s Our Time in Eden.

From the Undertones‘ classic self-titled debut, the record that includes “Teenage Kicks.” Â This track is also on the fine compilation, The Very Best of the Undertones. Â Recommended for fans of Buzzocks, early Clash, and classic punk.

Studio musicians, with Ron Dante on vocals, performing as the Archies (of the animated cartoon series based on Bob Montana’s comic books). Â This was their big hit single. Â Here’s the introduction to The Archies (TV show).

From Aguilera‘s Back to Basics, which also includes the hit “Ain’t No Other Man.”

From Q-Unit’s Greatest Hits, a mash-up album full of 50 Cent and Queen.

From the soundtrack to the movie Choke.

This appears on Osborne‘s Relish, which includes her hit single “One of Us.”

From the Boy Least Likely To‘s charming debut album, The Best Party Ever.