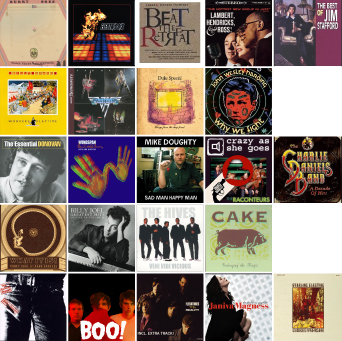 The vocalese trio from their Hottest New Group in Jazz LP. Â If you like vocalese, then – well, then you probably already have all of Lambert, Hendricks & Ross‘s recordings.

A seasonal number from the Oklahoma indie group, Evangelicals.

From Bragg‘s Workers Playtime, which includes “The Great Leap Forward” and “The Short Answer.” Â A great record.

Very catchy mash-up of Gnarls Barkley‘s “Crazy” and the Raconteurs‘ “Steady as She Goes” – with a little Grandmaster Flash and the Furious Five (“The Message”) added, to taste. Â Nice.

From Prolonging the Magic, Cake‘s third album (features the hit “Never There”).

Appears on the band‘s album Songs from the Deep Forest.

From Joel‘s hit album, The Stranger… which had many other hits – “Movin’ Out (Anthony’s Song),” “Just the Way You Are,” and “She’s Always a Woman.” Â Below, an energetic Joel performs the song in… 1981? Â His attire suggests 1981 or thereabouts.

The theme song to the James Bond film of the same name. Â Here’s a live performance that I would guess (based on the hairstyles) dates to the mid-1980s.

From Harding‘s Why We Fight.

From the Burnt Ones‘ debut LP, Black Teeth & Golden Tongues.

Appears on the same album as the band‘s “Hate to Say I Told You So” – Veni Vidi Vicious.

Featuring a vocal turn by Jack White, the Electric Six warns us about the dangers of high voltage. Â On the dance floor. Â There’s a really campy video for the song, which may be NSFW – well, depending on where you work.

The former Soul Coughing frontman sings about the friendliest ghost you know.

From the great album of Richard Thompson covers, Beat the Retreat.

Sticky Fingers. Â The Stones. Â Keith Richards recently talked to Fresh Air‘s Terry Gross. Â He doesn’t talk about this song, but he does talk a good bit.

When I was a student at Choate, I did my own radio show once a week, in the evening – Saturday nights, perhaps? Â I don’t remember. Â I do remember that my one regular listener called himself “Mr. Skittles” (after the candy, presumably) and would always call to request this specific song. Â So, Mr. Skittles, this song goes out to you – the Charlie Daniels Band‘s top 40 hit from 1980.

The band recorded for so many different record labels that there’s unlikely ever to be a great compilation of the Fleshtones‘ over-30-year career. Â Indeed, many albums are out of print and have yet to be released via any on-line music service. Â The Fleshtones vs. Reality is one such album – and the source for this particular song, a tune that gives conclusive proof that garage-rockers also listen to Judy Garland. Â (In this tune, you’ll hear some quotes from her “The Trolley Song.”)