Here is one origin story for Crockett Johnson’s classic Barnaby. At some point in early 1942,Â PM‘s Art Editor Charles Martin visited Crockett Johnson at his home in Darien Connecticut. Â There, he saw a half-page color Sunday Barnaby strip. Â Johnson had been unable to sell it. Â Martin liked the strip, took it back to New York, and tried to sell it to King Features. Â They rejected it. Â PM‘s Comics Editor Hannah Baker loved it, and Barnaby made its debut on April 20, 1942 (preceded by the ads I posted on Monday).

I don’t know what ever happened to Johnson’s original color Sunday Barnaby, but from 1946 to 1948, a color Sunday Barnaby did appear in a few newspapers. Â When it started, Johnson was serving as a story consultant on the Monday-SaturdayÂ Barnaby, having ceded the writing to Ted Ferro and the artwork to Jack Morley back in January 1946. Â Johnson returned to writing the Monday-Saturday strip in September 1947, with Morley staying on to do the art (Ferro left at that point). Â I believe that Johnson’s involvement with the Sunday strip mirrors his involvement with the weekday strip. Â If that’s so, then the strip below – dated 13 July 1947 and reproduced courtesy of generous collector Colin Myers – is from just before Johnson ceased being merely a story consultant and resumed actually writing the text. 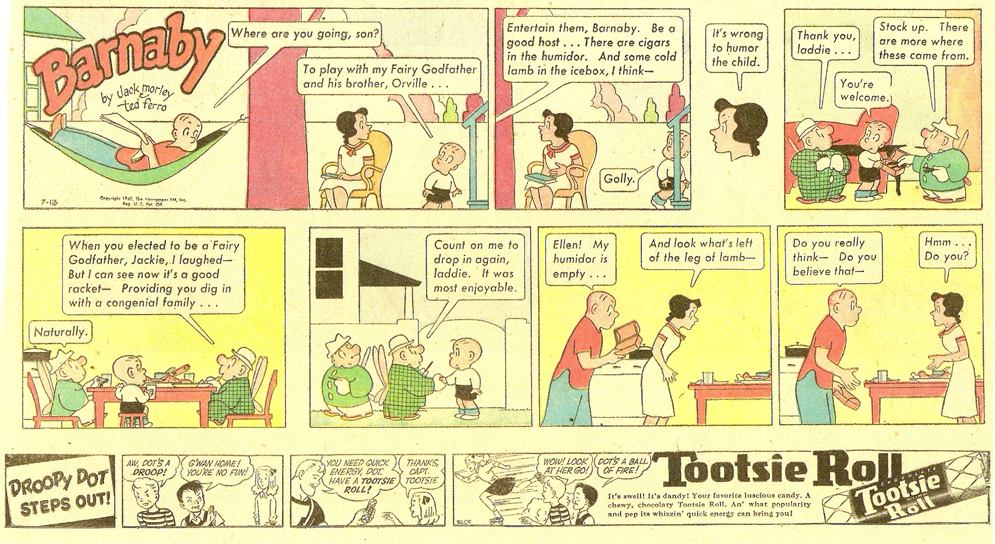 (Aside: The mendacity of the Tootsie Roll advertisement above is so cheerfully amoral: hey, kids, eating candy gives you energy! Â Sure, the energy is very short-lived, but, uh… why not eat more candy? )

I haven’t seen many of the Sunday Barnaby strips, but those I have seen tend to recycle an idea from earlier Monday-Saturday strips – and by “earlier,” I don’t mean “earlier in the week.” Â I mean “at any point earlier in Barnaby‘s run.” Â But not all of them merely recycle. Â The concluding Sunday sequence – published in May 1948, written by Crockett Johnson – is new material. Â And quite clever, too.

Well. Â Other tales ofÂ Barnaby‘s origin, along with about half a dozen weekday strips, will appear in The Purple Crayon and a Hole to Dig: The Lives of Crockett Johnson and Ruth Krauss (forthcoming from the University Press of Mississippi in 2012). Â Yes, this is a shameless plug for my biography. Â Thanks again to Colin Myers for the strip! Â And, for those who need reminding, clicking on the strip itself will allow you to see it in its full size.