For those who care about such minutiae, here are some outtakes from Chapter 14, “At Home with Ruth and Dave” – from which I’ve just cut 540 words. Â The chapter, which covers Crockett Johnson and Ruth Krauss in 1947 and 1948, draws heavily on Ruth’s 123-page account of their daily lives in late winter 1948: suffering from writers’ block, she took a friend’s advice to write a few pages every day. Â The resulting manuscript reads like a modern-day blog. Â In short, it’s a biographer’s gold mine. Â But, of course, I can’t use it all!

I’d already reduced it to just a few major themes, one of which is the document itself. Â Ruth’s friend “planned to write three pages a day, in this way getting her dissertation ‘novel’ done.” I’ve cut an explanatory sentence after that:

It’s unclear whether her friend was writing a dissertation or a novel: considering publishing the results of her writing, Ruth sometimes crosses out words (including proper names) to replace them with ones that might work better in a magazine article or book.

The above did explain the struck-through “dissertation,” but who really cares? Â This is about Ruth and not her friend. Â Also, slicing that out allows me to move the narrative forward sans interruption. Â I made another small cut in a story concerning an incident that highlights Ruth’s racial consciousness. Â A white woman (Louise) in the neighborhood accused her black maid (Esther) of stealing two cups and two forks. Â I’ve cut this:

When Louise threatened to call the police, Esther replied, “Go ahead.”Â  Louise decided not to phone, but instead to defer to her husband (who was not home at the time).

And I’ve moved directly to Ruth’s concern that such an accusation would make it difficult for Esther to find work, and would damage race relations. Â The above detail would be important if I were writing (say) a legal history of racial discrimination, but what’s interesting for readers of the bio is what this means to Ruth. 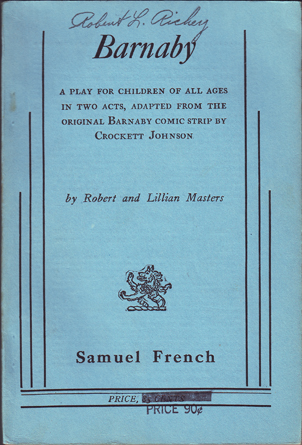 The chapter also addresses a couple of dramatizations of Johnson’s comic stripÂ Barnaby. Â My main change here has been to cut the plot summary – which, in each case, was already radically reduced from what I’d originally written. The first, Robert and Lillian Masters’ stage version (for children’s theatre), focuses on Mr. Baxter (Barnaby’s father) running for major against the corrupt Boss Snagg. Â I’ve retained that, but cut this:

All action takes place in the Baxters’ living room, and Mr. O’Malley’s flying is described but not shown.Â  Though a comedy, the show at times veers towards melodrama: Snagg is not just a crooked politician; he’s a criminal who threatens the Baxters with a gun.Â  Usually, though, it maintains a light tone.

The above detail isn’t needed. Â However, I have retained that the Masters’ adaptation focuses on characters rather than special effects or scenery: the failure of the former and the expense of the latter doomed an earlier stage version, and so this detail resonates with that.

The second adaptation, this one by Sidney Rumin and Helen Mack’s, was the second attempt at making Barnaby a radio serial. Â Like the earlier version (which I’ll post tomorrow), this one also failed. Â I’ve heard one episode (and there’s a second I’ve not heard), but it never found a sponsor. Â Too bad. John Brown’s Mr. O’Malley and Jared Brown‘s Barnaby are both very good. Â Anyway, after noting that the dramatization conveys sympathetically the perspectives of both children and adults, I indicate that this version (like an earlier stage adaptation) includes Barnaby’s parents taking him to a psychologist. Â I’ve then cut all of this:

While Doctor Lenser is out of the room, O’Malley reads aloud some case histories and makes one into a paper airplane.Â  When the doctor returns (just after O’Malley disappears), Barnaby explains what O’Malley has done,Â  supplying details from the cases. Lenser accuses the Baxters of playing a prank on him, and asks how their son could know this information when, according to them, Barnaby cannot read?Â  They rally behind Barnaby and, that night, each parent’s attitude towards Mr. O’Malley has softened. Mrs. Baxter, suggesting that Barnaby not mention this to his father, says that she’s bought the dill pickles O’Malley likes. Mr. Baxter, asking that Barnaby not mention this to his mother, says he has bought a cigar for O’Malley to use as his magic wand.Â  When O’Malley arrives that night, Barnaby presents these items to his fairy godfather, who says “Now we’re really living!”Â  The episode ends there.

Removing that allows me to segue directly to the fact that the show never found a sponsor. Â I’ve decided that too much plot summary slows down my narrative – the stories of Johnson’s and Krauss’s lives. Â I hope I’ve not removed items of interest! Â But… I’m reasonably sure that these cuts are good ones. Â Barnaby scholars and some Barnaby fans might care about the above, but other readers likely will not.

Tomorrow’s post will be one for Barnaby fans: full audio ofÂ Barnaby on the radio in 1945. Â So, stay tuned!