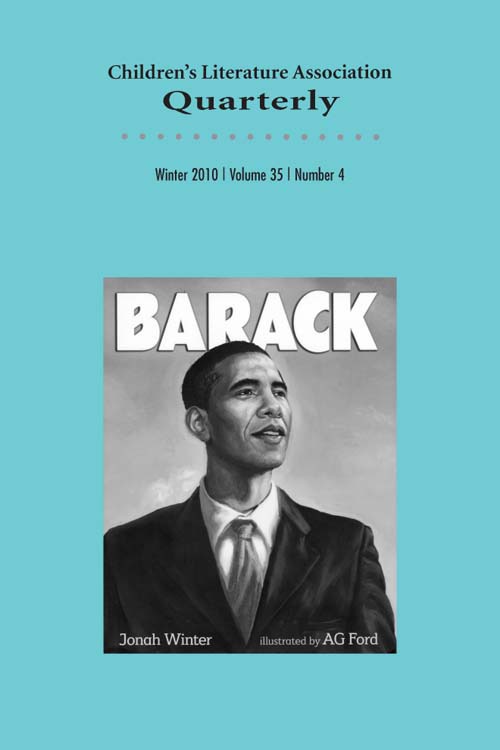 My article, “Obamafiction for Children: Imagining the Forty-Fourth U.S. President,” is now available on-line in the Children’s Literature Association Quarterly‘s current issue (35.4, Winter 2010). Â To give you a sense of its thesis, here’s a brief excerpt from early in the piece:

To examine how these Obama biographies attempt to fit him into dominant national myths, this essay focuses primarily on visual representations–picture books and comic books–with a particular emphasis on two pre-election picture books from 2008: Nikki Grimes and Bryan Collier’sÂ Barack Obama: Son of Promise, Child of Hope, and Jonah Winter and A. G. Ford’sÂ Barack. I make these two a primary focus because they’re the first picture books, have major publishing houses behind them, and seem to be the most popular children’s books about Obama. As of March 2009, Grimes and Collier’s book had sold 325,000 copies and was in its sixteenth printing; both books have been on theÂ New York Times Book Review‘sÂ bestseller list (Galupo).Â Barack has been so successful that Ford has illustrated two sequels, both written by Deborah Hopkinson: Michelle (published September 2009) andÂ First Family (published December 2009). With the exception of the sole anti-Obama children’s book (Help! Mom! Radicals Are Ruining My Country!, on which more later), in children’s books about the forty-fourth president, attempts to reify Obama as an ideal American collide with his more complex history, sometimes even effacing his race. (335)

This is a problem. Â It’s one reason why I’ve taken to sharing some work in progress on this blog. Â After all, scholars don’t get paid for writing scholarly articles. Â Indeed, this Obama article cost me hundreds of dollars in permissions fees (for the images) – fees paid out of my own pocket. Â Of course, I’m not in this for the money. Â I’m in it because I like learning and then sharing what I’ve learned. Â I was intrigued by the proliferation of children’s books about Obama, and so I thought: How many are there? Â What do these books tell us? Â The answer to the first question is 59 by the end of his first year in office (12 of those were published prior to the election). Â The full answer to the second question is… in the article. Â For a partial and incomplete answer to the second question, you might read some news articles I was quoted in, such as this December 2009Â Washington Post piece (after I gave the talk at the American Studies Association) or this March 2010 piece in the K-State Collegian (after I gave a longer version here at Kansas State University). Â But, yeah, to get it all – including access to all those images I paid for – you need to read the Children’s Literature Association Quarterly article.

The answer to the larger question of how to make scholarship more widely available is something smarter people are working on. Â If you’re interested in seeking answers to the larger question, then I invite you to peruse the work of Kathleen Fitzpatrick or visit MediaCommons, which is also trying to solve the problem.