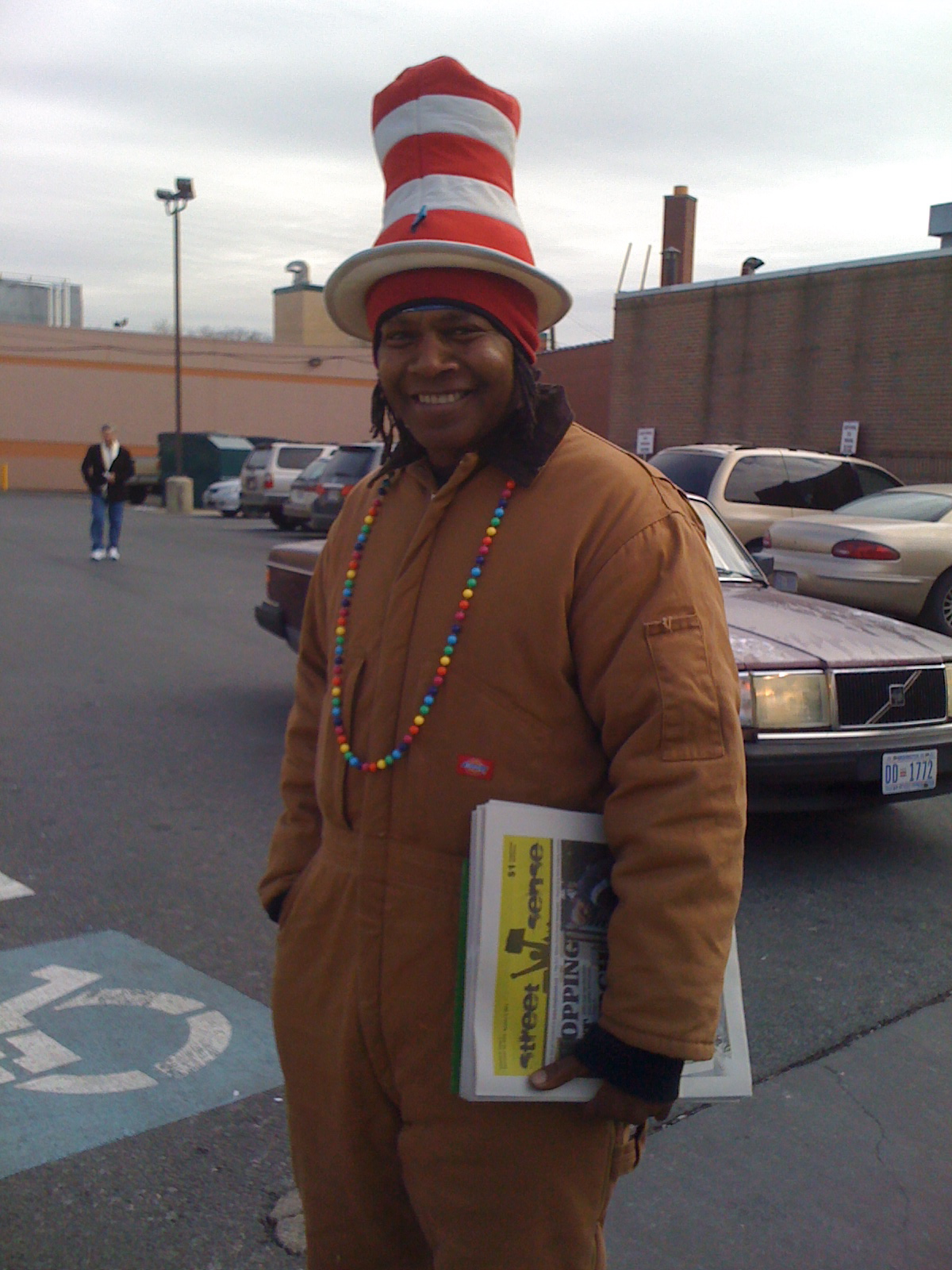 Quick post from Amtrak heading north. Â On the way back from the Diane Rehm Show (now archived on website), I passed the person at right, who was selling copies of Street Sense and who kindly granted me this photograph. Â I always enjoy spotting signs of Seuss in the world. Â And, here, I suspect that Seuss would approve of this donning of the red-and-white-stripped of his famous Cat. Â Although I’m not an expert on the organization, Street Sense wants to fight homelessness – and is thus the kind of progressive cause that Ted Geisel (a.k.a. Dr. Seuss) would be likely to support. Â It also struck me as appropriate to go from talking about Seuss on the air, to seeing this “cat” on the street. Â An apt confluence.

The radio show itself was fun. Â My fellow guests, the Rev. Derrick Harkins and Maria Salvadore,Â were super, and of course Diane Rehm did a wonderful job. Â I particularly enjoyed being in studio. Â Since Kansas is not exactly a hub of public radio programs, I do most of my interviews long distance – either in a studio in Kansas, or over the phone. Â That works a-OK, but the visual cues of the studio experience are even better. Â One does not have to listen for the music to know to wrap up a comment quickly; simply look at Diane making the “wrap it up” hand gesture, and you know. Â Likewise, it was easier for the guests (and for Diane) to sense who wished to speak next.

And, the more you talk about something, the more you learn – one reason why I enjoy the interchange of class discussion. Â For instance, Rev. Harkins made a good point about the openness of Seuss’s message – it’s very inclusive. Â The idea that the Grinch learns that “Christmas, perhaps, means a little bit more” doesn’t tell you what it means, exactly, but does (as Maria Salvadore pointed out) strip away all of the “stuff.” Â That’s what the Grinch doesn’t like – all the things. Â When that’s pared away, he’s able to understand, to have his epiphany. Â And what is that epiphany? Â I’d say that it’s about community: he joins the circle of Whos, and carves the roast beast himself. Â He comes in from exile, & finds a place to belong. Â It is, as Charles Cohen points out in his 50th anniversary edition of How the Grinch Stole Christmas!, an echo of the “Prayer for a Child” poem he published in December of 1955 in Collier’s. Â There, in an uncharacteristically religious poem, Seuss writes “Please tell all men / That Peace is Good. That’s all / That need be understood. / In every world / In Your great sky. / (We understand. / Both you and I.)”

The Grinch finds peace in the community of Whos – a message that resonates with The Sneetches (in which groups who discriminated against one another cease doing so), and Horton Hears a Who! (in which we learn that a person’s a person). Â So… on that note of brotherhood (and sisterhood), I’ll conclude.