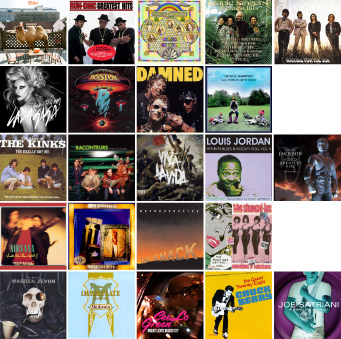 Since Lady Gaga’s new single “Born This Way” made its debut last month, critics have alleged that the song is “derivative” or even a “rip off” of Madonna songs like “Express Yourself.”  And, of course it is.  But that also doesn’t matter in the least.  All pop music is derivative.  “Express Yourself” (1989) borrows from the Staple Singers’ “Respect Yourself” (1971).  This fact eludes those who allege thievery on behalf of Lady Gaga – presumably because people like to believe that pop music is original.  Great pop is not original.  It just sounds original.

UPDATE: Added Spotify playlist because links below are long since defunct

Respect Yourself, The Staple Singers (1971)

The Raconteurs’ “Steady As She Goes” (2006) borrows its baseline from Joe Jackson’s “Is She Really Going Out With Him?” (1979), a song which takes its title from the opening line of the Shangri-Las’ “Leader of the Pack” (1964).  It’s possible, too, that Jackson’s song also bears some influence from the Damned’s “New Rose” (1977), which begins by quoting that same opening line from the Shangri-Las.  Did listening to the Damned inspire him to use that Shangri-Las line?  I’m not sure, but it strikes me as a possibility.