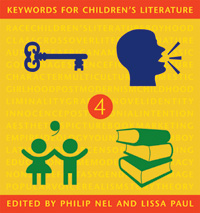 In our new post over there, you’ll find links to both the Table of Contents and our Introduction.  Lissa and I say a few words about what is in the book and what isn’t.  We also ask: What words did we miss?  Should there be a future edition of this book, what ought to be included?

But don’t answer those questions here.  Get on over to the Keywords for Children’s Literature blog.  Read our brand-new post, and then join the conversation.  Thanks!