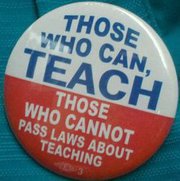 Making the rounds on Facebook is a button I’d very much like to purchase.  This sums up the last decade of U.S. educational policy: “Those who can, teach.  Those who cannot, pass laws about teaching.”  From “No Child Left Behind” (promoted by President George W. Bush) to the comparably flawed “Race to the Top” (promoted by President Barack Obama), educational policy has been guided by ludicrous ideas like: rather than giving public schools the funds they need, they should be forced to compete for less money.  Also: instead of creating conditions that foster learning, let’s focus purely on testing.  And let’s not forget this one: instead of making college affordable to all, states should gradually stop supporting higher education, shifting that cost onto those who can least afford it — the students.

Which brings me to my point.  It’s time to end the war on education.  Really.  Stop fighting the people — teachers, librarians, reading specialists, college professors — who are working to educate the next generation of Americans.  Stop slashing budgets, firing teachers, interrogating school librarians, cutting salaries, increasing class sizes.  Worldwide, U.S. students are ranked 14th in reading, 17th in science, and 25th in math.  And we’re dropping steadily.  In secondary education, between 1995 and 2008, the U.S. slipped from ranking second in college graduation rates to 13th in college graduation rates.

So.  Let’s end our race to the bottom.

In his last State of the Union, President Obama said that teachers in America should be regarded with the same respect as they are in South Korea, where they’re considered “nation builders.”  I couldn’t agree more.  But, apart from a tepid acknowledgment of teachers’ rights, the president said little when Wisconsin’s governor sought to cut teachers’ salaries and strip them of their rights to collective bargaining.  In that same State of the Union speech, referring to a number of challenges we face, the president called this a “Sputnik moment.”  Again, this sounds great.  But in response to the last Sputnik moment, the U.S. government invested in education.  Right now, we’re busy divesting — indeed, we’re dismantling our public education system.

Why?  No, it’s not “the sluggish economy” or “we lack the resources” or “in these times of financial exigency, we all must make sacrifices.”  It’s because the dominant idea shaping the national dialogue is that capitalism is a moral system, a smoothly efficient social Darwinism that will allow good ideas to thrive and bad ideas to fail: if the government would simply get out of the business of governing, the argument goes, then everything would improve.  So, let’s slash taxes on the wealthiest, slash funds from public programs, and we’ll all be happy in a libertarian utopia.  This is utter nonsense.

People in both political parties need to acknowledge that a progressive income tax is (a) fair, and (b) has helped sustain our public institutions for eight decades.  People who make more should pay more.  So, yes, eliminating the so-called Bush Tax Cut (extended by President Obama) would be a start.  As, of course, would collecting taxes from companies that avoid paying taxes.  ExxonMobil, Citibank, Goldman Sachs, Bank of America, and others all had profitable years in 2010, but managed to avoid paying taxes.  So, ending corporate welfare would provide another source of revenue.

America is not broke.  It’s pursuing policies that redistribute wealth to the wealthiest, and thus take funds away from everyone and everything else.  One effect is the dismantling of our public institutions — like schools and libraries.  These institutions took generations to build.  And, now, the nation watches as its representatives undo generations of hard work.  We watch as governors and state-appointed lawyers actually accuse educators (in which I include librarians) of being a drain on public funds.

UPDATE, 17 May 2011: Jenipher (below) tells me that one can purchase the buttons via UnionButtons.