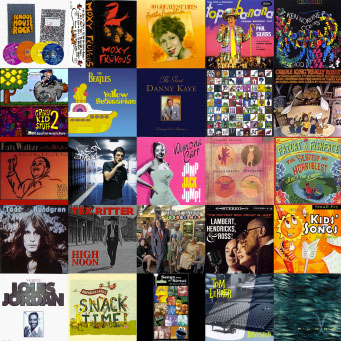 In North America, those of us who are teachers or students are thinking about school.Â  In August and September, the summer holidays end, and a new term begins.Â  To commemorate (or commiserate?) this season last year, I posted Dark Sarcasm in the Classroom: A Back-to-School Mix.Â  This year, I’m posting a mix about language. Â Enjoy!

On Sesame Street, Big Bird (voiced by Carroll Spinney) tries to pronounce the alphabet as a single, 26-letter word. Â FromÂ Songs from the Street: 35 Years of Music.

In another one from Sesame Street, the voices of Ladysmith Black Mambazo join Kermit the Frog (voiced by Jim Henson). Â This song can also be found onÂ Songs from the Street: 35 Years of Music.

“West Xylophone, Yemen, Zimbabwe!” They Might Be Giants’ alphabetical trip around the world, from their second children’s album, Here Come the ABC’s.Â  If I weren’t restricting myself to one song per artist, I would definitely include other TMBG songs in this mix.

I don’t know much about Gordon MacRae, but Jo Stafford was a popular vocalist in the 1940s and 1950s.Â  With husband Paul Weston, she was also half of the deliberately off-key comedy duo Jonathan and Darlene Edwards. Â This song appears on the compilation Small Fry: Capitol Sings Kids’ Songs for Grown-Ups.

From King’s great collaboration with Maurice Sendak, Really Rosie –Â an animated TV special that first aired on CBS in 1975.

Having concluded the “ABC” section of the mix, we turn to the dictionary, courtesy of New York trio Muckfurgason.

“These are the books I like to read / Because reading suits me. / With every page I turn, the pictures coma alive.Â  / Imagination takes what’s possible to new heights.”Â  And the song name-checks both Harold and the Purple Crayon and Green Eggs and Ham! Â From Frances England‘s Fascinating Creatures.

The first of 6 songs from Schoolhouse Rock on this mix.Â  Since I encounter students (yes, college students) who do not know what a noun is, I often wish that these were still airing during Saturday morning cartoons.

One of several songs that Lehrer did for Sesame Street. Available as a bonus track on Tom Lehrer Revisited.

This always sounded to me a bit like a combination of a nursery rhyme and a reading primer. From the end of Yellow Submarine, where the Beatles appear on screen and talk to the audience:

From Rundgren’s Hermit of Mink Hollow.

Putting onomatopoeia into practice, Mr. Tex Ritter tells us all about noises – those made by cows, pigs, ducks, sheep, railroad trains,… even college boys.

Though I expect this song appears on more than one compilation, it appears here via the 3-CD set The Great Danny Kaye. Â Can anyone sing this lyric at the pace that Kaye does? Â I doubt it.

Appears on the New Zealand group‘s album Dogbreath, and again on the compilation The Bestest and Horriblest.

A song of malapropisms, a term named for Mrs. Malaprop, a characterÂ in Richard Brinsley Sheridan’s The Rivals (1775). Â This particular song, however, is from a different play – the Broadway musical Top Banana (1952),Â with music and lyrics by Johnny Mercer and book by Hy Kraft.

From Logan Whitehurst’s final record (Very Tiny Songs,Â completed just before he passed away), a tribute to the man who gave us the term “Spoonerism.”

A Dylanesque tribute to palindromes or a palindromic tribute to Dylan?Â  Either way, the results are funny. Â From Yankovic‘s Poodle Hat.

From the band’s debut –Â a 6-song cassette.Â  This Canadian quartet were my favorite group of the 1990s.Â  Their live shows were something to behold. Below, an example of their improvisational stage shows. The song itself starts at around 4:30. Â Warning to our underage listeners: in the live performance below, Jian Ghomeshi drops a bunch of F-bombs at around 7:40 or so. Â The audio-only version (above) is clean.

From the band‘s self-titled debut album.

Gospel, R&B, rock ‘n’ roll – Carr sang it all. Â This is from a collection titled Jump Jack Jump!

Continuing the nursery rhyme theme, here’s a #6 pop hit for Aretha Franklin.Â  The B-side of “Say a Little Prayer,” the song appears on 30 Greatest Hits (Atlantic, 1985).

The jump blues of Louis Jordan (and others) helped create the sound that would become known as “rock ‘n’ roll.”Â  From The Best of Louis Jordan (MCA Records, 1975), a solid single-CD collection of his work.

The final song in our “nursery rhyme” sequence appears on A Good Man Is Hard to Find: The Middle Years Part Two (1938-1940).Â  One in Bluebird/RCA’s fantastic series of Fats Waller CDs –Â now, alas, out of print.

The song for which Barenaked Ladies named their 2000 album appears on Ken Nordine’s spoken-word/jazz classic, Colors.Â  I’ve placed it here because, like nursery rhymes and playground chants, the song is as much about the sound of words as what they mean.Â  And, linking us to the next song, the theme of the record is Nordine trying to describe colors –Â the sort of task for which one might want to unpack some adjectives….

The mix concludes with four Schoolhouse Rock songs.Â  I generally don’t like to use so many songs from the same record (in this case, a 4-CD set), but since each track is performed by a different artist, I’ve given myself a pass here.Â  Here, the late Blossom Dearie –Â of “Peel Me a Grape” fame –Â teaches us about the adjective.

31)Â  Lolly, Lolly, Lolly, Get Your Adverbs HereÂ  Bob Dorough (1974)Â Â Â Â Â  3:02
Bob Dorough –Â who had previously worked with Miles Davis on “Blue Christmas (To Whom It May Concern)” – sang (and wrote) a number of Schoolhouse Rock songs, including “Three Is a Magic Number.”

32)Â  Verb: That’s What’s HappeningÂ  Zachary Sanders (1974)Â Â Â Â Â  3:00
“A verb tells it like it is.” In addition to teaching us about verbs, this cartoon features an African-American superhero — not a common sight on television either in the early 1970s or today. Â Zachary Sanders also sang the Schoolhouse Rock song “Electricity, Electricity.”