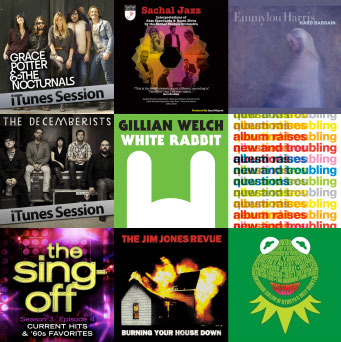 Inspired by NPR’s 5 Great Cover Songs from 2011, here are my top 12 covers from 2011 – starting with two of the hardest-rocking, and ending with the quietest ones.

This cover of Madonna’s 1989 hit comes from Grace Potter & The Nocturnals‘ iTunes Session EP, which also includes a cover of the Beatles’ “Dear Prudence.”

This Beatles cover appears on Burning Your House Down, a title which nicely describes the band‘s explosive Â thrash/punk/rockabilly sound. Â Wow. Â The intensity knocks me over. Â Here they are performing “High Horse” (an original) on Letterman in September.

Recorded for the Onion AV Club earlier this year, They Might Be Giants‘ cover of Chumbawumba’s 1997 pop hit appears on the TMBG b-sides compilation, Album Raises New and Troubling Questions.

Aloe Blacc‘s soulful cover of Jay-Z’s “99 Problems” (cleaned up for radio), which pulls in Kanye West’s “Can’t Tell Me Nothing” and James Brown’s “The Big Payback.” Â  He performed the song on BBC Radio 1’s Live Lounge.

The Wombats cover Jessie J’s big hit, described by lead vocalist Matthew Murphy as “a massive bulletproof pop song with quite a nice sentiment.” Â I’m a big Wombats fan — if you don’t have their two LPs, well, what are you waiting for?

Such a beautiful cover of Ron Sexsmith‘s song, which originally appears on his RetrieverÂ (2004). Emmylou Harris likes the song so much that she also used it for the title of her album. Â She could sing almost anything and make it sound transcendent, but when she sings a song that’s already a good one – well, just give it a listen, eh?

This doesn’t actually stray that far from the Fruit Bats‘ original version, but there’s something about the Decemberists‘ ragged intensity that keeps bringing me back to their recording. Â It appears on their iTunes Session EP.

Beautiful, melancholic version of the Jackson 5’s 1969 smash hit. Â Sonos were one of the best groups on NBC’s The Sing-Off, sent home early for being a bit too experimental in their interpretations. Â That willingness to experiment, however, is precisely what made them — and Afro-Blue (another group that should have been a finalist) — so great. Â But the judges didn’t get it. Â Sonos also recorded a longer version of this for their 2009 record SONOSings. Â The version here comes from The Sing-Off: Season 3, Episode 4.

An “Eastern” version of Dave Brubeck’s classic, recorded in Lahore, Pakistan by the Sachal Studios Orchestra.

Gillian Welch and David Rawlings offer their version of the Jefferson Airplane song. Â If you’re a fan of Gillian Welch, Terry Gross’s Fresh Air interview is well worth your while.

There’s a version of this on iTunes, but this is the recording you see in the video below… because I like this version better. Â Johnson and Stoner originally recorded their version of this Cole Porter classic for a Nokia advertisement.

Very nearly all of the covers on the Green Album (new versions of songs that feature in Muppet programs) are great, but I’m particularly fond of this one. Â Gonzo the Great brings some pathos to the original version, but Rachel Yamagata singing “There isn’t a word yet for old friends who’ve just met” should touch the heart of even the crustiest curmudgeon. Â (Yes, I’m talking to you, Statler and Waldorf!)