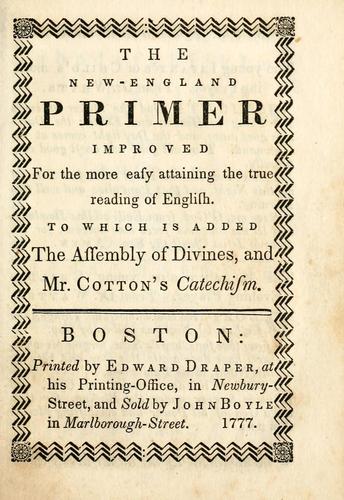 The beginnings of children’s literature in America predate the nation, but not the region. In 1686, the publication of the New England Primer heralded a centuries-long tradition of books for children and young people written in, on, and around New England. These works show that constructions of places and people are not wholly separate processes; in their convergence, they produce complex and multi-faceted environments. Just as it is impossible to consider “the child” as a singular entity, it is equally impossible to conceive of a single “New England.” Both formations are heterogeneous, intricate, and highly dependent upon subjective perspective. Proposed for the Jan. 2013 MLA in Boston, this panel will consider not only the different New Englands readers encounter through various texts for children, but –Â concurrent with the MLA 2013 Presidential Theme of “Avenues of Access” –Â also how the region itself has both prevented and promoted access to children’s literature.

Questions and subjects prospective panelists might wish to pursue include but are not limited to:

This panel is sponsored by the MLA Children’s Literature Division but is not guaranteed. Â The 2013 MLA will be held in Boston, 3-6 January 2013.