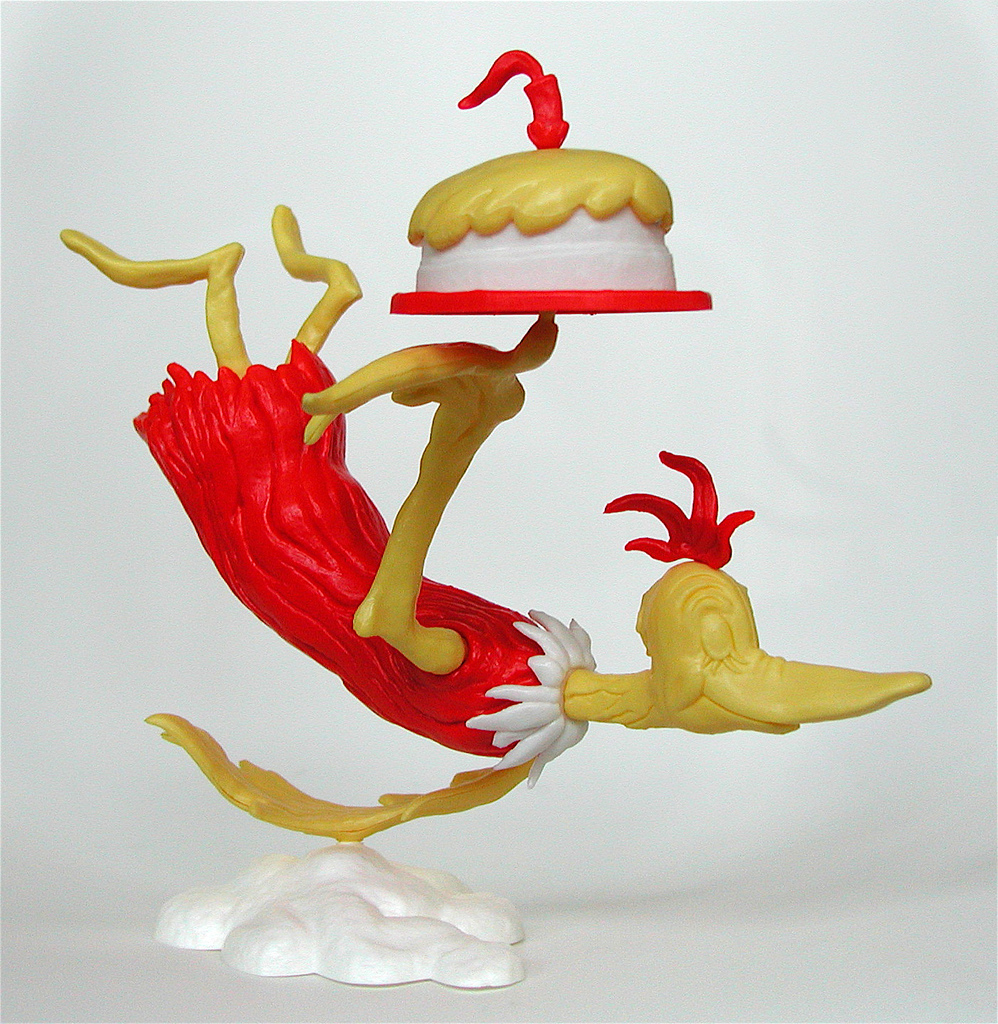 What do we know about Ted and birthdays?Â  We know that he wrote a birthday book.Â  Published on August 12, 1959, Happy Birthday To YouÂ was Ted’s first book with completely new characters in two years (since the Grinch–the two books that were published in between returned to previously created characters) and he anxiously wanted it to be a success.

Wanting to return with something special, Ted created his first full-color book.Â  It worked–according to a Dec. 17, 1960 article in the New Yorker, the first print run of 100,000 copies “proved inadequate… Within a few weeks, stocks of the book were exhausted, and fifty thousand additional copies were run off.”

Of course, after The Cat in the Hat and How The Grinch Stole Christmas came out in 1957, Dr. Seuss books were, in general, pretty popular.Â  By the June 5, 1960 issue of The New York Times Book Review section, a Random House advertisement celebrated that “5 out of the 16 books on the New York Times children’s best seller list are DR. SEUSS books.”

Happy Birthday to You!Â delivers the expected menagerie of strange animals, but this time, readers weren’t marveling at Marco or Gerald McGrew amid all of these wonders.Â  For the first time, Ted created a book about the prospect of YOU entering the world of Dr. Seuss and being surrounded by flower-snipping Who-Bubs and foliage-toting Hippo-Heimers, a cafeteria-carrying Smorgasboard and a time-telling fish, singing herrings and plumbing-horn blowing Zummers, and transportation beasts like Hiffers and Hooded Klopfers.

There was a particular aspect to birthdays that was important to Ted.Â  In “Happy Birthday To You!,” the Birthday Bird exclaims, “There is no one alive who is you-er than you.” Moreover, he explains that “If we didn’t have birthdays, you wouldn’t be you” and, if you weren’t you, “You might be a doorknob!Â  Or three baked potatoes!/You might be a big bag full of hard green tomatoes.”

Ted was taken with this concept of personal uniqueness throughout his life.Â  At a party given for his 80th birthday, he surprised guests, who had prepared speeches, with a poem of his own:

If my Daddy had shacked up

with some lady else…

I would not have resulted.Â  I wouldn’t be me!

There’d just be no telling who the hell I might be!

For example, had he foolishly eloped to South Wooster

I might now be writing for Simon and Schuster.

As he got older, Ted generally tried to avoid public celebrations of his own birthday, claiming that he would “observe his birthday in West Ear Lobe, Saskatchewan.”Â  When asked whether his fame would make him “a big noise in West Ear Lobe,” Ted guilefully replied, “You don’t know West Ear Lobe.”

In addition to his usual aversion to publicity, the problem was also that birthdays eventually become reminders of aging–a fact that Ted skewered in one of his more surrealistic birthday pieces, presented to the publisher who brought him to Random House.Â  For Bennett Cerf’s birthday in 1940, Ted reworked a piece that he’d written several years earlier for his alma mater’s literary-arts magazine.Â  It was a parody of Romantic poems like John Keats’ “Ode on a Grecian Urn,” in which Ted replaced visions of the beauty and grandeur of pentelic marble (of which the Parthenon was constructed) with his own “pentellic (sic) bilge”:

The fine-toothed comb of Time marches on

Through the scalp of Life.

The dull, blunt needle of Time

Sews another button on a sadly worn pair of underdrawers.

In the dank, musty, spider-webbed cellar of Existence

The Superintendent of the Animate

Throws another shovel full of the Anthracite of Breath

Into the gassy, Old-fashioned Furnace of Living.

For every hour has sixty minutes;

A mildewed cloud leans its crutches against

And clears its throat to speak.

But no one gives ear.

Who gives a cockeyed sausage wreath!

Who cares if the strings of the Zither of Life

Are flecked with one more flick of Corn Flakes!

…Who cares if Cerf is thirty-umpfh

O Anguish of Age!Â  Is there no one who cares?

…I care, shouts a man with a face not unkind!

I care, shouts a girl with a dancing behind!

I care, shouts another whose name is anonymous!

…So come and let us frantic freshly!

Come and let us dorsal deftly!

Come and let us limber lushly

In a Grecian Urn!

And let us sing with throats unfurled

And tonsils blithe and snorty!

For Bennett Cerf is thirty-nine.

Now it’s 2013, the 109th anniversary of Ted’s birth.Â  The best way that I can think to commemorate the day is with his own creation, as he created it for Revell in 1960. 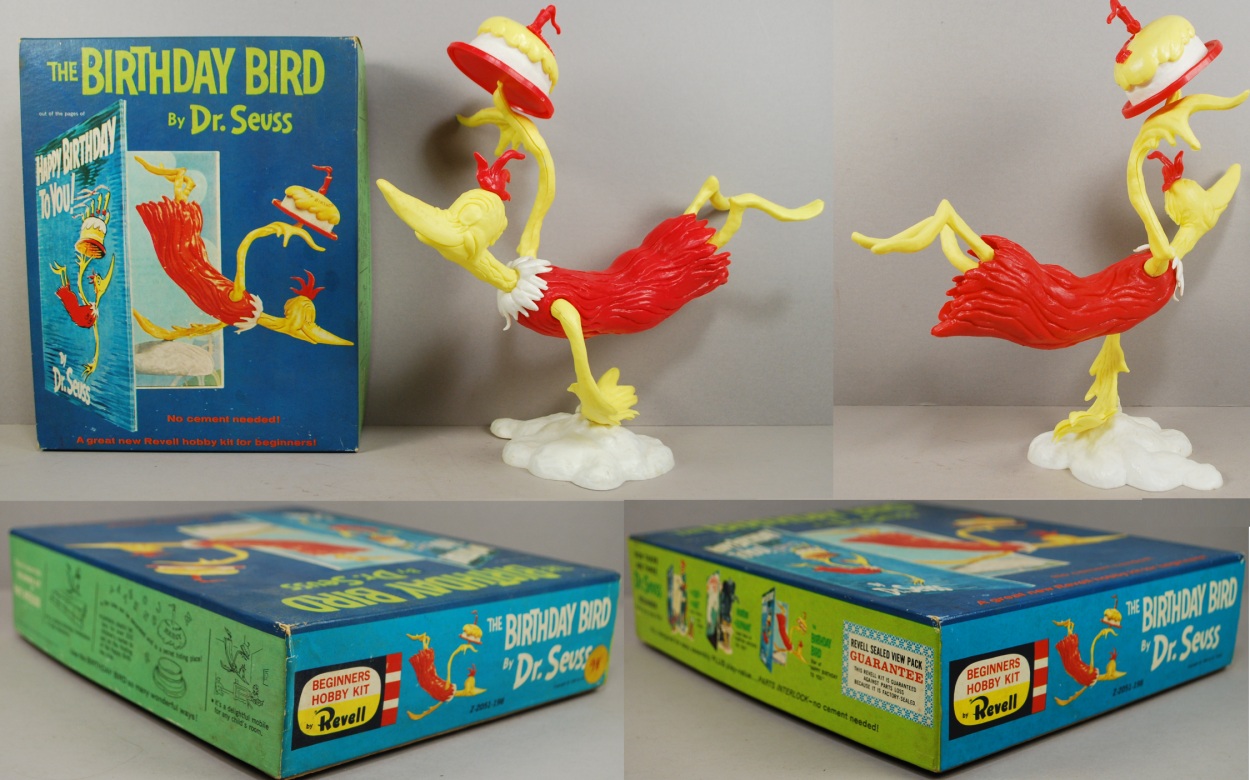 Enjoy the day without which Ted would have had no others.Â  He has meant a great deal to each of us in different ways.