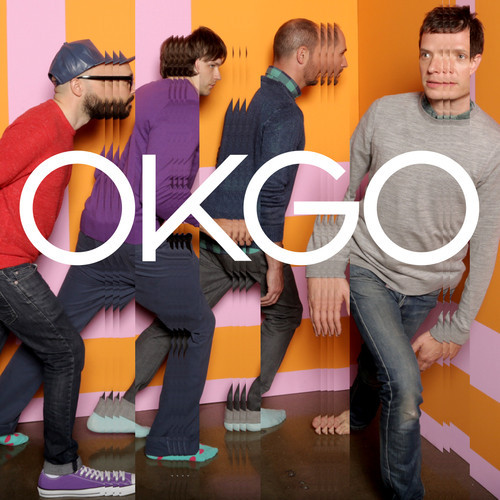 OK Go videos: They’re surprising, clever, and eminently re-watchable. They also have an appealingly handmade feel to them, harkening back to aÂ timeÂ when digitally manipulating images was too expensive for a music video. For the stop-motion classic “Sledgehammer” (1986), Peter Gabriel had to lie still for hours, beneath a plate of glass, while people from Aardman Animations manipulated fruit above him. Â And they’re unapologetically Art with a capital “A.” Yes, OK Go hopes you’ll buy the band’sÂ music, but the videos don’t feel like they’re trying to sell you anything beyond the sheer enjoyment of watching creative minds trying to create something beautiful. If this were the 1980s, I would be waiting by the TV, ready to hit “Record” on the VCR when the next OK Go video came on. Fortunately, today, I can simply collect eighteen of them right here, on this webpage.

You see, there’s a new OK video out today: “I Won’t Let You Down,” directed byÂ Kazuaki Seki and Damian Kulash, Jr., with choreography byÂ Furitsukekagyou Airman, art direction byÂ Jun Nishida, and creative direction byÂ Morihiro Harano. Â The whole thing is done in one take, shot with a drone (!) – one reason, I gather, that it had to be filmedÂ in Japan. In aÂ BillboardÂ article about the creation of the video, OK GoÂ bassist Tim Norwind described the experience as “the best hour of my life.”

Unless I’ve miscounted (always a possibility), this is the eighteenthÂ video from the band’s art-for-art’s-sake era, the latest in a nine-year period of video innovations that began with “A Million Ways.”

The first OK Go video choreographed by Trish Sie (sister of lead singer Damien Kulash), “A Million Ways” is also OK Go’s first viral video. Â Co-directed by Sie and OK Go, it establishes a key piece of the band’s video aesthetic: performed live, all in one take. It also introduces dance as a recurring motif.

Also choreographed by Trish Sie and co-directed by her and the band, “Here It Goes Again” is in many ways synonymous with the term “viral video.” If you’ve been on-line in the past eight years, you’ve almost certainly seen this one.

It ups the ante on “A Million Ways”: not only are they performing choreographed dance moves, but they’re doing it allÂ on treadmills (all of which, incidentally, were set up in Sie’s basement). Â It inspired many fan videos, a SimpsonsÂ tribute, and the band even performed the dance live (on treadmills!) at the MTV Video Music Awards.

Directed byÂ Tim Nackashi and OK Go, “Invincible” is… well, actually, less of an eye-opener than the previous two. Using multiple takes, it juxtaposes shots of the band performing (on one side of the screen) with stuff getting blown up (on the other side of the screen). ItÂ harkens back to the pre-“A Million Ways” period. But you can’t expect genius every time. And, anyway, it still has sharp visuals, and is fun to watch.

There’s actually an earlier video for this song, directed byÂ Olivier Gondry, but I can’t find it on-line. Â This video, directed by Damian Kulash, finds the group back in risk-taking mode. Wearing outfits that match the wallpaper behind them, the band and other performers rock out. But because the costumes prevent us from seeingÂ their faces, even the rock stars become oddly anonymous, phantoms launched from the wallpaper.

I think also of the masked coupleÂ in Magritte’sÂ The Lovers (1928) – intimacy obstructed by cloth. Here, weÂ have improbably energeticÂ performers, encased in wallpaper suits. But there’s still a tension between what you expect (stasis) and what you get (activity).

With “WTF?”, the first video from Of the Blue Colour of the Sky, OK Go is fully back in innovation mode. Directed byÂ Tim Nackashi and OK Go, the band creates another video which prompts you to wonderÂ OK,… so, how did they do that?

Knowing that we’d wonder how they did it, the band also created what I think is their first making-of video, something that would become a regular feature.

The first, and less famous, of the two “This Too Shall Pass” videos features the University of Notre Dame’s Band of the Fighting Irish and took 20 takes to get right. Brian K. Perkins and OK Go directed the piece, shot in a single take.

I love that they recorded a whole new arrangement of the song for the video, too.

This Too Shall Pass (Rube Goldberg Machine) (2010)

Directed by James Frost, OK Go and Syyn Labs, this is the better-known version of “This Too Shall Pass.” In some ways, it inaugurates an even more ambitious period of video-making for the band – and establishes the Rube Goldberg Machine as a key part of the OK Go aesthetic.

Filmed over the course of 18 hours (including a period when the band sleeps!), and then sped up (at different speeds), “End Love” also features… a goose! They shot the video in a park, and the goose, evidently, wanted to be a part of it. Hey, can you blame her? Â Directed byÂ OK Go, Eric Gunther, and Jeff Lieberman.

And, yes, there’s a series of behind-the-scenes videos for this one!

A stop-motion video using over 2000 pieces of toast, eachÂ laser-cut with artÂ by the band and Geoff Mcfetridge. The notion of telling a story via animation on toast compliments this quiet song’s themes ofÂ longing and impermanence. Sure, it’s an unusual way to express these ideas, but that sense of novelty is what makes it an OK Go video.Â

In this video, OK Go takesÂ its fans on a GPS-ledÂ parade through L.A. Their goal? To use aÂ GPS app to spell out “OK Go.” Â The New Orleans vibe of the parade has its pleasures, but the concept is more fun than actually watching the video documenting the concept. Still, though,Â I give them credit for trying something different.

Fearturing the dance troupe Pilobolus, and directed by OK Go, Pilobolus, and Trish Sie, “All Is Not Lost” brings us back to the Wow! How did they do that?Â for which OK Go has rightlyÂ become famous.Â Â There is also an interactive version of this one, which is well worth checking out. Â Really. Â It is “way cooler,” just asÂ the video (below) tells you.

Also, for those who want to know how it was made, there’s a series of behind-the-scenes videos.

DirectedÂ by Brian L. Perkins and Damian Kulash, the band drives a Rube-Goldberg’d car through a Rube Goldberg’d landscape. Instead of making a Rube Goldberg machine that choreographs movement and image to the song (as in “This Too Shall Pass”), this machineÂ actually performs the song it accompanies.Â According to the YouTube page, “The video took 4 months of preparation and 4 days of shooting and recording. There are no ringers or stand-ins; Damian took stunt driving lessons.”

And you bet there’s a behind-the-scenes video series for this one!

The final video fromÂ Of the Blue Colour of the Sky, “Skyscrapers” features choreographer Trish Sie dancing the tango withÂ Moti Buchboot. Â Sie also directed it. Â Brightly colored, elegant, and absorbing, the video is a reminder of the band’s understanding that we (its audience) don’t requireÂ Rube Goldberg machines to hold our attention.Â It’s also nice to see Sie – who launched the band’s career as video auteurs – move to a starring role.

If you’ve watched the preceding videos, now… watch the meta-video! Â OK Go and the Muppets pay homage to the OK GoÂ oeuvre and, of course, to the Muppets!

ForÂ Sesame Street, OK Go did a stop-motion video explaining the primary colors. Watching it again reminds me, too, that their post-“A Million Ways” videos all have an almost childlike playfulness to them. Â There’s a sense ofÂ hey, what if we tried this? Â The end result requiresÂ careful planning, of course. But the band and their collaborators seem animated by a spirit of adventure and experimentation.

And that brings us full circle, back to the first video from their latest record (Hungry Ghosts, which I strongly recommend).Â Â It’s another single-shot video, but this time the emphasis is on optical illusions. Â It reminds me a bit of the optical-illusion street art where, from the correct angle, the street has suddenly become (for example) a cliff.Â Directed by Aaron Duffy, Damian Kulash, Jr. and Bob Partington, “The Writing’s on the Wall” is great fun to watch. And that, friends, is the theme of the OK Go videos. They areÂ fun. The band is making art because it isÂ fun to make art. Â They’re art for art’s sake in the very best sense of that term.

I hope you’ve enjoyed this tour of OK Go’s music-videoÂ oeuvre. I wonder what they are planning now…?