Good news for employees of Kansas universities. Freedom of speech appears to have been restored!

You see,Â the Kansas Board of Regents’ recently passedÂ social media policyÂ saysÂ employees of Regents-governed KansasÂ universities do not have the right to freedom of speech. To be specific, employees can be fired for speech thatÂ “impairs discipline by superiors or harmony among co-workers,” “has a detrimental impact on close working relationships for which personal loyalty” is necessary, or isÂ “contrary to the best interests of the employer.” According to a separate policy on political activity, “personnel are free to express opinions speaking or writing as an individual in their personal capacity and not as a representative of the institution in signed advertisements, pamphlets and related material in support of or opposition to parties and causes.”

So, then, what of Coach Bill Snyder’sÂ public endorsement of Senator Pat Roberts? Â Does it violate either policy? Â If not, then what precedent does it set? Â Given the lack of public criticism from either the Regents or Kansas State University, it seems to suggest that outspokenness is welcome. 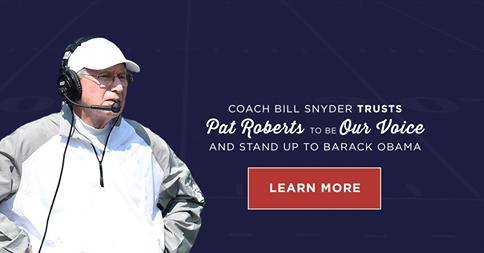 Note that, in the ad above (from the Pat Roberts for Senate 2014 Facebook page), it’sÂ Coach Bill Snyder. The Roberts campaign has carefully Photoshopped the K-State logo from Snyder’s jacket and cap. But the title “Coach” only has meaning in the context of “Kansas State University.”

But does this violate the “political activity” policy? I asked the Kansas Board of Regents yesterday.

@philnel @KState “personnel are free to express opinions speaking or writing as an individual [sic] in support of or opposition to parties” – KS Board of Regents (@ksregents) October 30, 2014

To clarify, I followed up with this question.

The Regents did not answer that one.

This morning, however, President Kirk Schulz issued a “reminder about university policy,” which does offer an answer: “Kansas State University does not endorse political candidates, and employees do not speak for the university when they endorse candidates. Employees should also avoid using their university-affiliation in any endorsements or statements.” On the one hand, since Snyder’s university affiliation is notÂ specifically named in the advertisements, his endorsement is within the letter of the law.Â On the otherÂ hand, this statement distances the university from Snyder’s endorsementÂ and reminds university employees that they should “avoid using their affiliation” in public statements on political candidates. In the video below, some of the photosÂ indicate that Snyder and Roberts were takenÂ at K-State. And, of course, that wordÂ Coach can only be meaningful in the context of “Kansas State University” – even if you omit those three words, they’re there by implication. Â  Â  Â Â 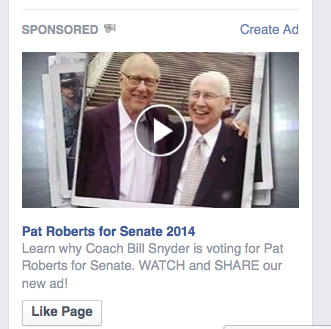 What I take away from this is that, though President Schulz isn’t crazy about the idea, faculty can endorse any political candidate they like and canÂ use their title in doing so. Â So, for instance, a sentence like “University Distinguished Professor Philip Nel endorses Paul Davis for Governor of Kansas” is acceptable speech – even if President Schulz wouldÂ prefer that such statements were not made. As evidence, I would point to the Coach-Snyder-for-Pat-Roberts advertisements appearing on Facebook today. 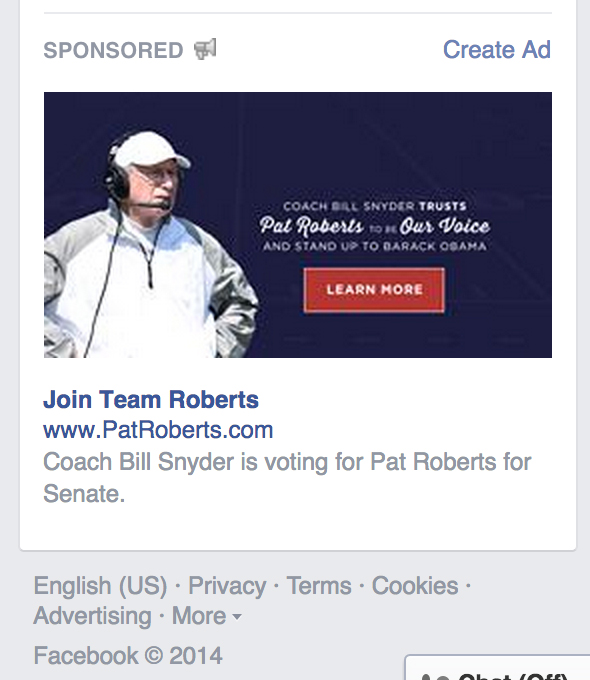 That this passes muster with the architects of the social media policy is also welcome news. For example, in the ad, Coach Snyder says that Senator Roberts is “as good as it gets for the state of Kansas,” isÂ “a great friend of the state of Kansas,” andÂ “he genuinely cares about the people of the state of Kansas.” Â As anyone who has followed the Senator’s career in government knows, he’s an advocateÂ of torture, in favor of workplace discrimination, against student loan affordability, and believes that guns are more important than human lives (or, at least, that massacres like Sandy Hook are acceptable collateral damage). Â Now, it strikes me as at least possible that some people might look at Roberts’ record and say that the university’s most famous employee’s endorsement of suchÂ record is “contrary to the best interests of the employer.” Â I mean, one presumes that Kansas State University might want to standÂ againstÂ workplace discrimination,Â for student loan affordability, and might even want to prevent a Virginia-Tech-style massacre on its campus. Evidently, though, Coach Snyder’s employer would prefer that he not make such statements, but is unwilling to take any public action against him.

The most intriguing line of Coach Snyder’s endorsement is his claim that Senator Roberts is “an honest individual.” His campaign advertisements against Greg Orman and statements in debates all provide ample evidence to the contrary. His ads allege that a vote for Orman would be a vote for President Obama, but in fact Orman (running as an independent) has said he will caucus with whichever party wins the Senate. Â Roberts said heÂ missed a Senate committee hearing on Sept. 16 about onÂ threat of the Ebola outbreak because “The hearing was held out of session, during September.” However, asÂ The Kansas City Star points out, “The Senate was in session that day.” Â Roberts misses quite a few votes, actually – and most of those he attends are simply to vote “no” (on immigration reform, on Steven Burns as a new member of the Nuclear Regulatory Commission, etc.).

Yes,Â a cynic might argue that Coach Snyder’s speech is not facing censure from the Regents because their leaders alsoÂ support Roberts, but – either way – this political advertisement sets a precedent. Employees can publicly say whatever they like, regardless of whether it’s true, false, or good for the university. WhileÂ Coach Snyder’s standards for politicalÂ office are remarkably low, I support his right to speak in favor of the candidate of his choice. Â And I’m glad that, in doing so, he’s set a precedent for the rest of us to support the candidates we favor. Â As Ms. Rosenberg (on Twitter) says,…