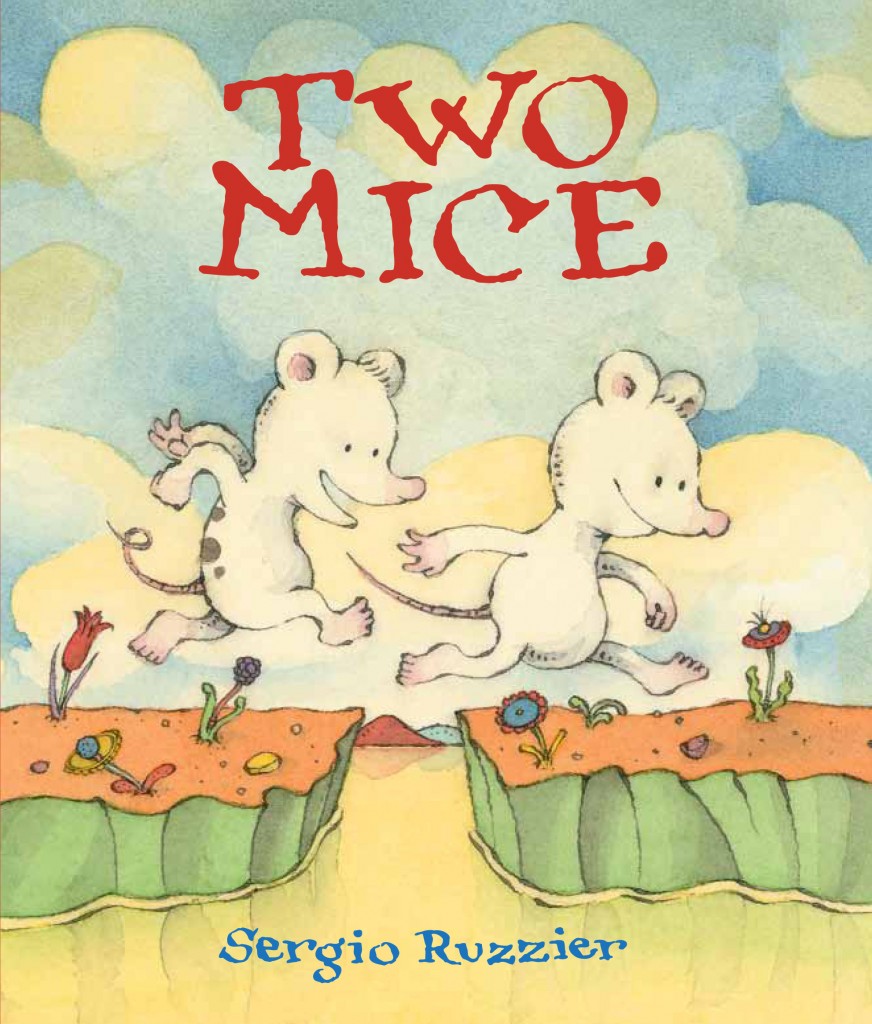 Sergio Ruzzier’s Two Mice (Clarion, 2015) exemplifies the elegant efficiency of the picture book. Illustrate just the right moments in the narrative, add a few well-placed words, and you can create an engaging, imaginatively rich story.

Well, I say you. But, most likely, you can’t. Most of us can’t. I certainly can’t. Remarkably, Sergio Ruzzier can. He makes it all look effortless, too.

As Maurice Sendak once observed, a picture book most resembles a poem (Caldecott & Co.Â 186). Like the poem, the picture book is a compact form, requiring precision, and careful management of all its many parts –Â artistic style, color palette, layout, design, typeface, diction, pacing,… all of it. As if this weren’t challenging enough, Ruzzier has limited himself to twenty-seven words, created a concept book that also tells a story, and repeated the same numeric pattern –1-2-3, 3-2-1 – precisely four times.

In its precise balance of words and pictures, Two Mice’s narrative unfolds with perfect economy. Before the title page, Ruzzier shows us “One house” –Â a cozy cottage. On the title-page spread are “TWO MICE” in their beds; the white one is asleep, and the spotted oneÂ is just getting out of bed. Their light green bedroom is far more spacious than the house’s outside view (from the previous page) suggested it might be. On the right-hand page, a small mouse hole in the baseboard offers a wink at the common but unacknowledged paradox of those anthropomorphic animals who populate so many children’s stories. (If these mice are stand-ins for people, then what are their mice?) The next page depicts “Three cookies”: in a warm yellow kitchen, both mice are seated at a light blue table. The mouse who rose first is eating two of the cookies; the mouse who rose second has only one cookie, and looks on grumpily at his (or her) housemate. 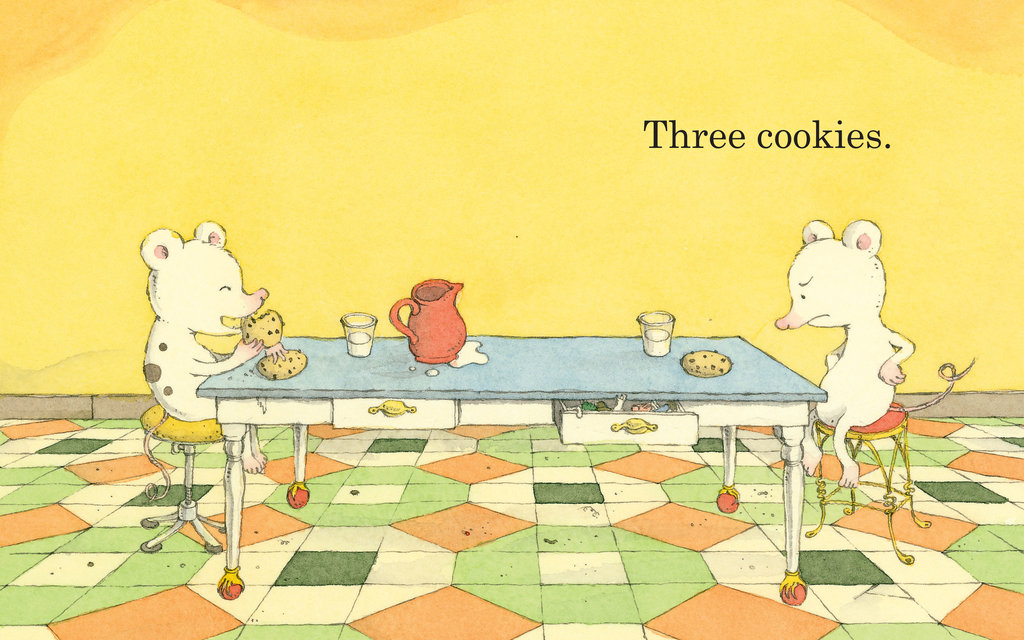 Initiating the descending numeric pattern, the next two-page spread also launches the mice’s adventure, as they arrive at a dock where there are “Three boats” and “Two oars.” Like Remy Charlip’s Fortunately (1964), Two Mice follows a “reversal of fortune” narrative, in which nearly every two-page spread revises the expectations of the previous two-page spread. The promise of adventure, suggested by the un-spotted mouse, as he (or she) gestures towards the three boats, instead yields –Â on the next two-page spread –Â an unfair distribution of labor. There is “One rower”: the spotted mouse rows, while his (her) un-spotted housemate rests. As the story progresses, the narrative intrigue increases. I don’t want to spoil the surprises, but I will divulge that two more of the book’s twenty-four nouns are “shipwreck” and “escape.”

Two Mice is a brief master class in the picture book form, an engaging narrative, an elementary counting book, and a pleasure to read and re-read. So. Read it to the young people in your lives. Or, to borrow Ruzzier’s idiom…