Today’s post is a version of the inaugural entry on my MySpace  blog.  I’m re-posting it for three reasons.  First, who reads MySpace blogs, anyway?  Chances are, you’ve never seen it.  Second, it is the sole interesting post from that abandoned experiment.  Third, I’ve been obsessed with the alphabet since I was a child… and this is alphabet-themed.

When I was a boy, I learned “The Cockney Alphabet” from my parents. I also learned the standard alphabet, of course.  But, “The Cockney Alphabet” — which my parents learned when they lived in London, c. 1965-1968 — is funnier.  To get the humor, you’ll need to read each of these with a Cockney accent.  Otherwise, much will be lost. Ready? Put on your best Cockney accent, and read the following out loud:

Some of those are going to be a bit obscure, even if you get the accent right! Here are a few notes on some of the possibly more confusing ones:

I: Ivor Novello was a popular Welsh singer and actor.
J: Jaffa oranges were a brand of oranges.
K: Kay Francis was an American actress.
Z: zephyr breezes are a type of mild breeze.

There are other versions of this alphabet floating around. Under the title “Twentieth-Century Alphabet,” I Saw Esau: The Schoolchild’s Pocket Book (ed. Iona & Peter Opie, illus. Maurice Sendak, 1992) prints a slightly different version. Here are a few differences: 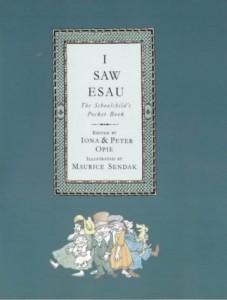