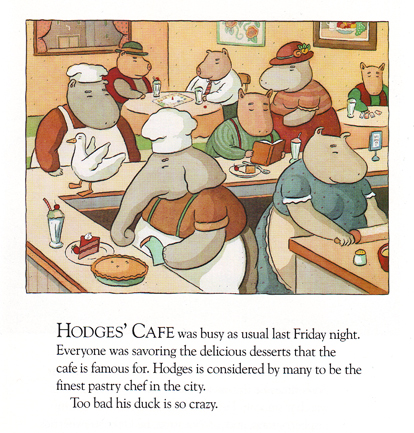 This is from the opening page of Tim Egan’s Friday Night at Hodges’ CafÃ© (1994).Â  It has one of my favorite lines in children’s literature: “Too bad his duck is so crazy.” The deadpan absurdity of that statement always cracks me up.Â  That said, when you look at the duck strutting on the counter, Hodges’ watchful eye angled towards him, you realize that the duck may indeed be a bit eccentric. “Everybody likes the duck,” our narrator tells us on the next page. “He’s just a little different. Sometimes he throws ice cream on the floor just to watch it smoosh. He’s also been known to dive into raspberry tarts, and, on occasion, he kicks strawberries across the room.”

And so begins the first of Tim Egan’s dozen picture books, to which he has recently added the Dodsworth easy reader series –Â three so far, each of which co-stars that crazy duck! 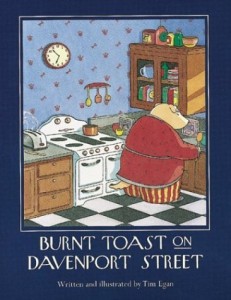 Egan’s picture books have received good reviews, but he’s never yet won a major children’s book award.Â  Actually, I don’t think he’s ever won any children’s book award.Â  Which is simply wrong.Â  So, I thought I would write a little bit about him, in the hopes that more people learn of his work.Â  (For the record: I don’t know Mr. Egan.Â  I’m merely a fan.)

Most of his characters are anthropomorphic animals –Â cows, pigs, dogs, etc. who walk upright, wear clothes, speak in complete sentences.Â  Egan likes to have a little fun blurring the categories between people and animals.Â  The dog protagonists – Arthur and Stella Crandall – of Burnt Toast on Davenport Street (1997) dress well, and live in a beautifully furnished house.Â  They behave like humans.Â  Yet, beneath an illustration of Stella sitting on the couch and Arthur adjusting the TV set’s antenna, Egan writes, “Arthur and Stella were happy dogs.Â  They lived at 623 Davenport Street and had lived there for many years.Â  They spent their days doing what most dogs do.Â  Eating, walking, and sleeping.”Â  Near the end of the book, when the Crandalls are happy, “They both smiled and wagged their tails.”Â  Egan slyly reminds us that, though they dress and act like people, they retain their doggy natures.

His matter-of-fact presentation of silly situations makes these books work so well. Â The tone recalls James Marshall’s George and Martha stories. There’s a joke there, but Marshall and Egan let it develop from the story. They trust that you’ll find things funny. George pours Martha’s pea soup into his loafers so he doesn’t have to confess his dislike of pea soup.Â  In Egan’s Chestnut Cove (1995), “You can usually find Mrs. Lark strolling along the Cliffside with her pig, Eloise.Â  And sometimes you might see the Ferguson family having somersault races in the town square.”Â  On the next page, Egan reports, “Mrs. Ferguson wins most of the time.” 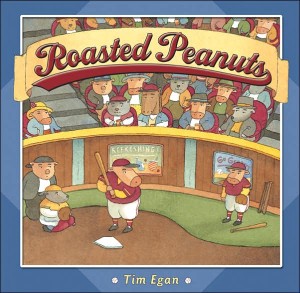 Many of his stories have a moral, but he always handles the lesson with subtlety and humor.Â  In Roasted Peanuts (2006), Sam (a horse) gets chosen for the local baseball team, the Grazers.Â  Yes, Grazers. Â (As the illustrations show, cows also play on this team.) Â Anyway, Sam gets chosen, but his best friend Jackson (a cat) does not: although he throws “really far and with great accuracy,” he’s slow, and can’t hit or catch well.Â  For Sam, playing on the Grazers without his friend, the joy goes out of the game, and he doesn’t play well… until Jackson gets a job selling peanuts in the stands.Â  He is so good at accurately throwing the peanut-packets that the crowd enjoys his performance as much as the game itself (where Sam is now playing much better).Â  OK, my summary fails to get across the nuances of the story, but my point is that its lessons are not heavy-handed.Â  It’s a tale of friendship, of finding your own talent, and of throwing peanuts far.Â  Really far. Â (63 rows is Jackson’s record.) 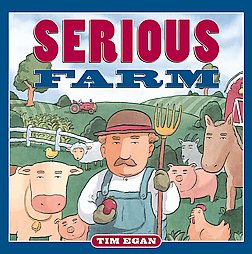 Each of Egan’s stories feels both slightly familiar and completely original.Â  On the familiar side, the picture books of both Marshall and William Steig come to mind –Â animal characters with distinct personalities, the suggestion of a moral.Â  And on the original side, there’s the unlikely premise of each story.Â  In Serious Farm (2003), Farmer Fred (a human character!) seems to lack a sense of humor.Â  The animals try to make him laugh.Â  The plot complication in Chestnut Cove begins with a watermelon competition sponsored by King Milford.Â  In The Pink Refrigerator (2007), Dodsworth’s motto is “Try to do as little as possible”… until he meets a pink fridge that starts to give him ideas.

Where does Egan get his ideas? Â He told Contemporary Authors, “My writing process consists of sitting in an overstuffed chair and staring at a notebook, hoping something will happen. When it doesn’t, I get more coffee. When it does, I write.”1 Next time you’re looking for a good story to go with your coffee, why not pick up some Tim Egan books? You’ll find them on the shelves by the overstuffed chair, right next to the watermelons.