In honor of Breast Cancer Awareness Month, here’s a Ruth Krauss book you might not know: This Breast Gothic, a poetry collection published by the Bookstore Press (Lenox, Mass.) in 1973.  And, yes, the illustration is by Krauss herself. 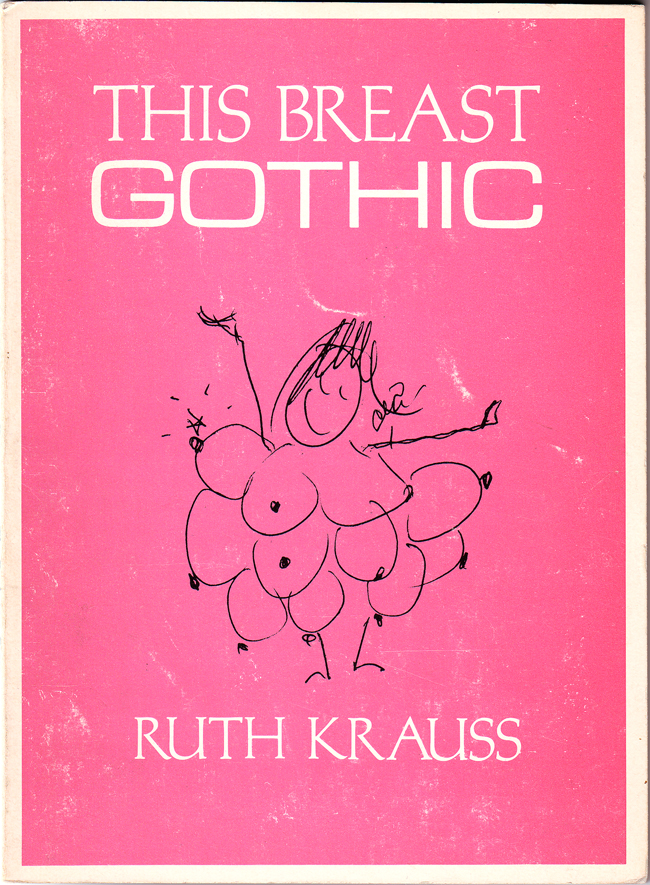 The author of The Carrot Seed (1945) and A Hole Is to Dig (1952) was also a poet and an artist.  Krauss began her poetry career in 1959, taking classes with Kenneth Koch at Columbia University.  Her formal training in art began much earlier.  In 1917, she left Baltimore’s Western High School to enroll in the new Costume Design program at the Maryland Institute for the Promotion of the Mechanic Arts (today, the Maryland Institute College of Art).  She never completed that degree, but she did earn one from the Parsons School in 1929.  After two decades of writing children’s books (her first was A Good Man and His Good Wife in 1944), Ruth for the first time illustrated her own.  In 1964, she published The Little King, The Little Queen, The Little Monster and other stories you can make up yourself, featuring pictures she made up herself.

From then on, she would occasionally illustrate her own work.  This Thumbprint (1967) features her own thumbprints, and (as you can see) This Breast Gothic displays a portrait of a woman who is mostly breasts — 11 breasts in all.  Wild, explicit, and vibrant against its pink background, the image suggests new meanings for the title poem (“This Breast”), inviting a rereading of lines like “This breast boom-boom yippee slurp strawberries cabañas / This breast as we go whizzing along,” and “This breast we have a fine view of everything that happens.”  Suddenly, the poem seems an exuberant celebration of the female body, giver of life and of food.  With a whimsical touch, Ruth’s poem now points to a woman’s power: from her breast comes art, literature, cities, history, news, … everything.

And, yes, in addition to Breast Cancer Awareness Month, this blog post is also promoting my book, The Purple Crayon and a Hole to Dig: The Lives of Crockett Johnson and Ruth Krauss, forthcoming from the University Press of Mississippi in 2012.