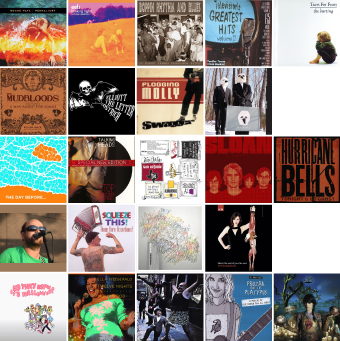 The theme to the television sitcom (1964-1972) about a witch named Samantha (Elizabeth Montgomery), her husband Darrin (Dick York, initially, and later Dick Sargent), and her mother Endora (Agnes Moorehead).

From the recently released (well, in late 2009) Twelve Nights in Hollywood, a 4-CD set that’s a must for any serious Ella Fitzgerald fan.

Led by Adam Dubberly, the Mudbloods were easily one of the most musically talented of the wizard rock groups.  Though they’ve disbanded, their music lives on — in this track, from the EP A War Amidst Pop Songs.

Canadian power-poppers Sloan are not very well known down here in the States.  That should change.  If you’re looking for an introduction to the band (and you should be), try A-Sides Win: 1992-2005.  The track featured here is from Parallel Play. Below, the video for the song.

Sobule is best known for her hit “I Kissed a Girl” — not the Katy Perry song, and indeed a song that’s much more interesting than the Katy Perry song.  If you’d like to hear some more strong examples of her work, I recommend “Claire” (off of Pink Pearl, 2000) and “Underdog Victorious” (off of the album of the same name, 2004).

Oklahoma’s Elliott the Letter Ostrich tell of an outbreak of… zombies!

Marbles is in fact Apples in Stereo frontman Robert Schneider.

Not sure who did this mash-up of Sophie Ellis Bextor‘s “Murder on the Dance Floor” and Public Enemy‘s “Bring the Noise.”

From Flogging Molly‘s debut album, Swagger.  Below, a live performance from 2008.

Those Darn Accordions‘ cover of the Charlie Daniels Band’s big 1979 hit.  From Squeeze This. Below, TDA perform the song live in October 2008.

From the fantastic live album (and concert film) Stop Making Sense.  The song originally appears on the Heads‘ Speaking in Tongues (1983).  Below, the trailer for Stop Making Sense, followed by David Byrne interviewing himself.

Written for Henry Selick’s film adaptation of Neil Gaiman‘s Coraline, “Careful What You Pack” and other TMBG songs were ultimately rejected.  Only TMBG’s “Other Father Song” (below) remains on the soundtrack.  This particular song (“Careful What You Pack”) can be found on TMBG’s The Else.

From the band‘s latest, High Violet. Below, the National perform the song on The Late Show with David Letterman in May 2010.

From Eels‘ Blinking Lights and Other Revelations.

Rockin’ cover of Patsy Cline, from Girl in a Coma‘s Adventures in Coverland.

I presume this is the same Deborah Walley who had the title role in Gidget Goes Hawaiian (1961).

Snob Scrilla (a.k.a. Sean Ray), from his EP The Day Before….

Appears on Tears for Fears‘ album The Hurting, a record that (in my recollection at least) was overshadowed by the even greater success of the band’s next album, Songs from the Big Chair (“Shout,” “Everybody Wants to Rule the World”).  Below, Tears for Fears perform “Mad World” on Top of the Pops in 1982.

From Hurricane Bells‘ Tonight Is the Ghost.

From the Doors‘ Strange Days.

And that’s the end of the Halloween mixes… for now.