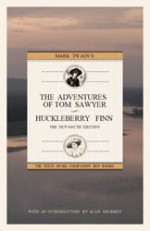 Yes, you’ve all heard about NewSouth Press publishing Huckleberry Finn and Tom Sawyer without the “n” word. Â But a couple of important points are getting lost in all the uproar.

As Natalia Cecire points out on her blog, the “political correctness” circus-goers are missing the point. I find it more noteworthy that such Bowdlerization is a common practice in children’s literature, but that it takes the Bowdlerization of a “classic” to make the news. The uproar focuses on Huckleberry Finn, the book canonized as a classic (i.e., for discerning grown-ups), and not Tom Sawyer, the book deemed “for children only” – even though both books have been altered in this new edition. (As Bev Clark has pointed out, at the time of their publication both books were considered both “boys’ books” and literature [for adults].) Â The implication here is that it’s more acceptable to Bowdlerize the children’s book (Tom Sawyer) than it is to Bowdlerize the classic (Huckleberry Finn).

Also, people should be more offended not by so-called “political correctness” but by our unwillingness to help children make sense of offensiveness. Though Mark Twain was progressive on race for a 19th-century white male, his books ought to offend current sensibilities. If reading Huckleberry Finn or Tom Sawyer in the 21st-century fails to offend, then we’re not really reading these books. And that’s a subject worthy of further discussion.