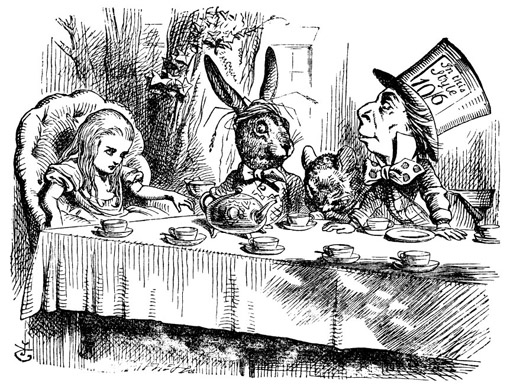 Last Friday, in my English 703: Critical Approaches to Children’s Literature class, the students and I spent 5 minutes talking nonsense. Â We’d been reading theories of nonsense, and Lewis Carroll’s Alice books – I thought it would be both fun and educational to put those theories into practice.

So, based on our readings of Tigges, Anderson and Apseloff, and others, I had them enumerate some of nonsense’s formal qualities: language as game; use of puns, double meanings, inversions, opposites; playing on idiomatic language, taking figurative language literally; and so on.Â  Then, we prepared for the nonsense chat. I set it up as a conversation with me on the one side, and a student on the other. Â These were the rules: (1) I asked them to raise their hands when they felt they had an entry point. Â (2) When the student could sustain the nonsensical banter no longer, she or he was to pass off the conversation to the next person whose hand was raised.

If speaking nonsense isn’t your forte, you could modify the above exercise as follows: make the teacher both referee and equal participant (i.e., not obliged to hold up the entire side of the conversation). Â Speaking nonsense comes quite easily to me. Â (Try to contain your surprise.) Â You see, my brain naturally comes up with multiple options in reply.Â  Most of the time, I chose the “sense” reply, and ignore the other options.Â  If I’m in a social situation, I listen to the other options, and will move back and forth between humor and seriousness, depending on my audience.

Anyway, back to class. Â We sustained the conversation for 5 minutes, no problem. Â (I wish we’d recorded it – some of our exchanges were quite funny.) Â After we finished, I asked them about the experience of talking nonsense. Â What had they learned? Â This conversation was interesting. Â As one student point out, it’s using language not to communicate, but to compete.Â  As another said, it’s an isolating experience – echoing a comment from nonsense scholar Wim Tigges, whose “An Anatomy of Nonsense” (1987)Â we read. Â Speaking nonsense does, of course, heighten one’s awareness of language’s formal qualities: in order to speak it, you sustain syntax in order to subvert sense. Â As Tigges puts it, “nonsense is not the absence of sense, but rather a frustration of expectations about sense” (25). Â It plays on the tension between meaning and its absence.

I love to discover pedagogical “stunts” that work (I dislike such stunts for their own sake). Â This, I am pleased to report, was a useful exercise. Â It educated while it entertained.