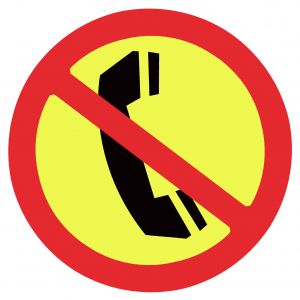 Unless I am expecting a call, I try to avoid answering the home phone.Â  9 times out of 10, it’s a solicitor –Â telemarketer seeking funds for a charitable organization usually, but sometimes a company conducting a poll.Â  If I have the energy, I ask to be taken off the organization’s call list (a strategy that does not always work).Â  If I don’t, then I hang up in the 2-second silence preceding the telemarketer’s voice.

I wish charitable organizations would not punish their supporters with these phone calls.Â  As a “thank you,” I’d much prefer to be contacted via mail or email.Â  Wouldn’t you? Â In response to such rudeness, I’ve stopped giving to organizations that phone me at home. (I maintain a list by the phone.) Â This isn’t an entirely effective strategy.Â  First, some organizations refuse to stop calling you even after repeated requests. The most egregious is the Sioux Nation Relief Fund / Council of Indian Nations (according to the American Institute of Philanthropy, these two groups are affiliated). While I support the rights of First Nations peoples, I willÂ never give to these charities ever again.Â  We’ve been asking them to take us off their list for years.

The second reason that this approach isn’t entirely effective is that I end up withholding support for truly outstanding organizations.Â  It truly pains me that Doctors Without Borders phoned me last September.Â  To provide medical care to those in need, this group goes into countries that the Red Cross deems too dangerous. For their work, Doctors Without Borders won the Nobel Peace Prize in 1999.Â  I’d been a regular donor for years, and then after this call… I stopped.Â  To their credit, the group has honored my request not to be phoned at home –Â I’ve received no further calls.

So.Â  What to do?Â  Before you suggest the national “Do Not Call List,” I’m already on the list.Â  Read the fine print: Charitable organizations to which you have given are exempt.

I think I need to institute some sort of review period.Â  Egregious offenders will remain off my giving list indefinitely, but those organizations who honor my request not to be contacted at home should have a second chance.Â  If, say, a couple years pass without a call from the offending organization, then I could put it on probation –Â that is, I resume giving, but let them know that further phone calls will result in the termination of my support.

Finally, I realize that it may strike readers as a bit churlish (or just downright mean!) to withhold support in order to discourage unwanted phone calls.Â  I’m sure that some –Â indeed, probably most –Â of you have more patience and charity than I do.Â  Beyond the rudeness, the issue for me is time. Â I get at least one of these calls (and usually more) every single day. Â And I’m very, very busy.Â  I don’t have time for all of the important things in my life, much less the unimportant ones.

Final note: I wrote this post about six weeks ago, but debated whether or not I should post it. Â (I do not upload every blog post I write.) Â I didn’t want to discourage charitable giving. Â Nor, for that matter, did I want to encourage selfishness. Â But, just now, I received two telemarketing calls at the same timeÂ – I had to put one on hold to answer the other. Â And, so, I thought… you know, perhaps this method of solicitation has gone too far. Â Thus, I’ve posted.