Although I wouldn’t argue that once upon a time “illustrators were celebrities,” it’s definitely true that they were once more celebrated than they are now. Â Predictably, one illustrator who comes to my mind is Crockett JohnsonÂ (my biography of Johnson and his wife Ruth Krauss will be published in the fall of 2012). Â In 1947, Johnson’s casual remark during a visit to the offices of William Sloane Associates struck Sloane – who founded the publishing company the previous year, after leaving Henry Holt (where he had been Vice President) – as interesting enough to use in an advertisement. Â (Click on the image to enlarge.) 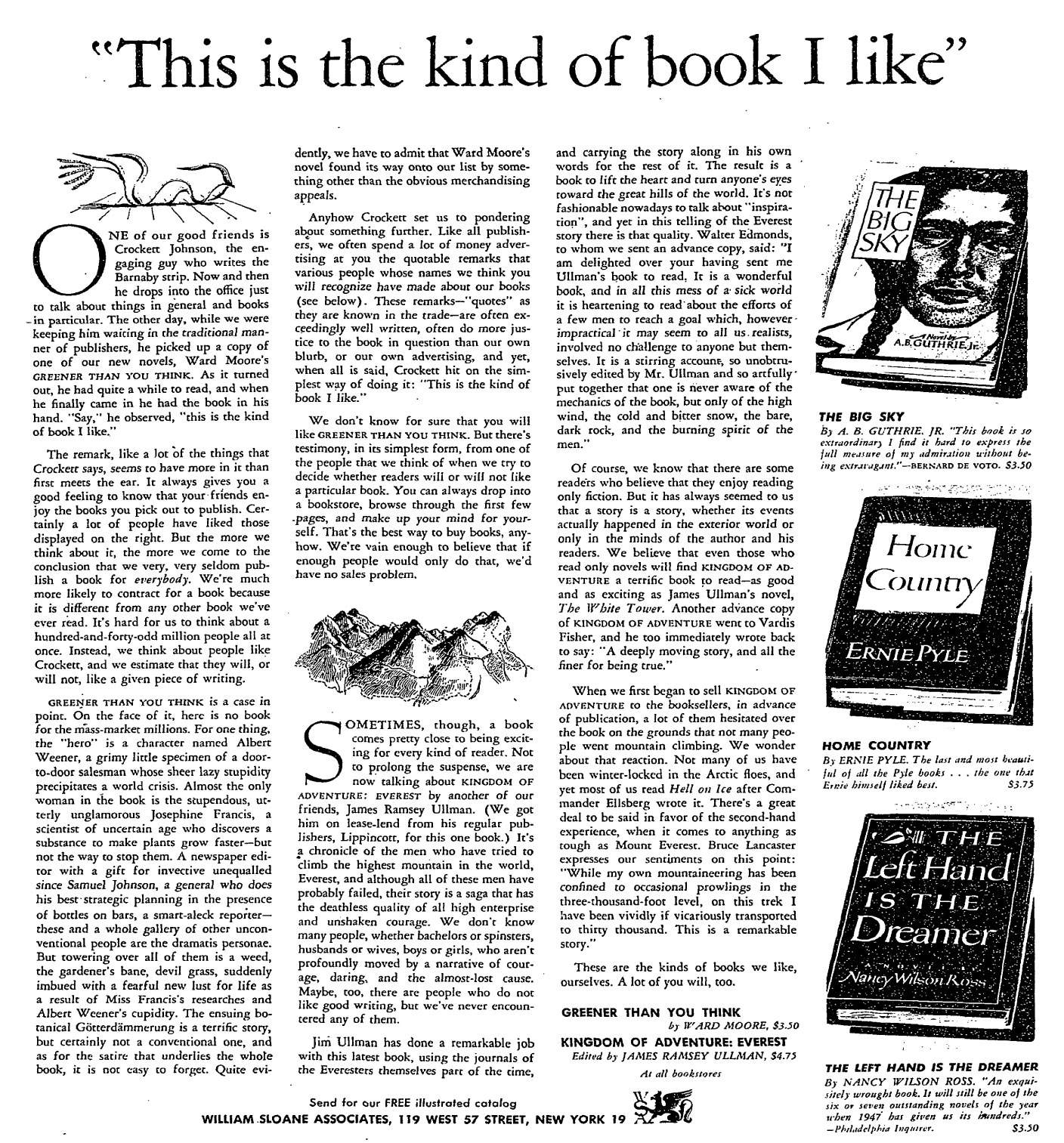 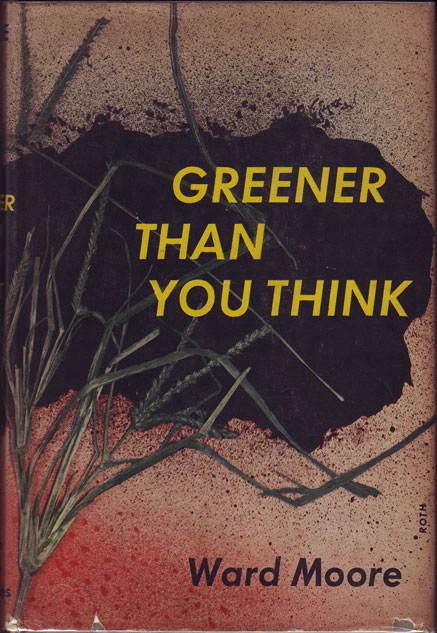 The book to which Johnson refers is Ward Moore‘s Greener Than You ThinkÂ (1947), a science-fiction satire about a mutant strain of crabgrass that ultimately takes over the world. Â Even by the standards of science fiction, it’s an unusual novel.

I know this because, when I found this advertisement (thanks to ProQuest’s Historical New York Times database), I sought a copy of Moore’s novel and read it. I wondered: Why would Crockett Johnson be drawn to such a curious book? Â Or, indeed, wasÂ he drawn to it at all? Â One should not take advertisements at face value, and, in any case, Johnson had a wry sense of humor. Â Perhaps this off-hand quip was nothing more than just that. Â Or, it may have simply been one of the manyÂ things in which he was interested. Â Johnson’s curiosity covered a wide array of subjects; in his intellectual interests and abilities, he was very much a renaissance man.

Turns out that, in its claim of Johnson’s interest in the book, the advertisement appears to have been telling the truth. Â In some 1947 notes written in an attempt to overcome writer’s block, Ruth Krauss mentions her husband’s interest in this book – which, she suspects, derives from his lifelong aversion to crab grass. Â Though Johnson later gave up on gardening, in the 1940s he was an avid gardner.

I ultimately did include a few sentences on this book in the biography. Â I did so because it illuminated an aspect of Johnson’s character, spoke to his wide-ranging interests, and located him in the offices of a publisher during a rough patch, professionally. Â I speculated that he might have been in the offices of the former VP of Holt (which published his two Barnaby books) in order to discuss the planned but never published third Barnaby book. Â It’s also mentioned in the bio. because it tells us that, in 1947, Johnson carried enough cultural cachÃ© to be quoted in a New York TimesÂ advertisement.

This little episode is but one of many reasons why this biography has taken so long to write. (I began working on it in the waning days of the Clinton Administration.) It’s also why, although I’m tempted to undertake another biography, actually doing so seems less likely. Â Undertaking another one is likely another decade’s worth of commitment.

Posts taggedÂ Crockett JohnsonÂ orÂ Ruth KraussÂ orÂ BiographyÂ will all send you to something connected to the biography. Â If you’d like a more directed reading experience, here’s an incomplete list of other posts: