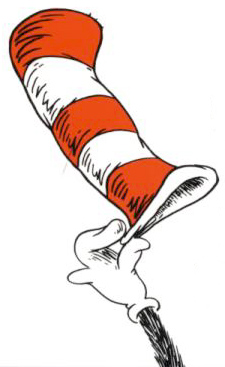 I’m doing it again – teaching an entire course devoted to Dr. Seuss (the link in this sentence takes you to the current draft of the syllabus). Â Art! Â Politics! Â Verse! Â Nonsense! Â Activism! Â These are but some of the subjects we’ll explore in English 710: Dr. Seuss, a graduate-level course which begins on Wednesday.

Aiming to improve on the earlier Seuss course (taught 5 years ago), I did not look at the earlier syllabus as I drafted this one. Â Only when I finished the draft did I read the 2007 version of the class, incorporating some of the worthier parts of that syllabus. Â The idea, this time, is to structure the class around a dozen sets of questions – any of which, as I’ve pointed out on the paper assignment, could lead students to a fruitful paper. Â Here are a few: 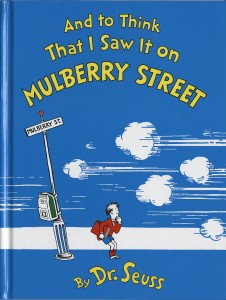 1. The Child: The Boy in the Book. Â How do Seuss’s works conceive of the child? With which understanding of childhood would you link his children? In his works, what sort of power do children have? And which children get that power? How is Seuss’s work influenced by his own childhood, including what he read?

3. Activism, Part 1: Horton Hears a Heil!Â How do Seuss’s politics play out in his own works? Are there ideological inconsistencies between his stated goals and other messages that the books may convey? What makes an activist children’s book persuasive to its readers?

7.Â Gender: Is Seuss for the Goose Seuss for the Gander?Â The most blunt way to ask this question is this: Was (or is) Dr. Seuss sexist? More subtle ways to ask the question might include: In what ways do Seuss’s books participate in gender stereotypes? In what ways do they resist gender stereotypes? What role, if any, should Seuss’s biography play in your answer to these questions?

10.Â Marketing: Quick, Henry, the DDT!Â Â There’s debate among those who study Seuss, and in the wider public discourse about Seuss. On the one hand, there are those who argue that much of the posthumous merchandising (Grinch selling breakfast cereal, etc.) violates Seuss’s wishes: his work had a moral and aesthetic value, not merely a commercial one. On the other hand, there are those who will point out that Seuss was a successful advertising man (until the publication ofÂ The Cat in the Hat, his primary source of income was advertising), and in fact entered into merchandising agreements during his life. Wade into this debate about art and commerce. Which side is more correct? Or is there a different set of questions we should be asking?

There are also questions about poetry, race, and adaptations, among other topics. (You can find a full list on the paper assignment.) Â  I chose this structure because the best discussions derive from good questions. 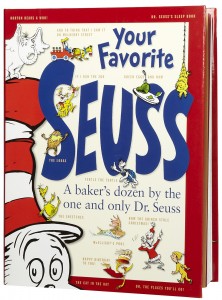 Another change from last time: using the anthology Your Favorite Seuss, instead of having the students buy individual Seuss books. Â I have mixed feelings about this choice. Â On the one hand, this is far cheaper than having them buy the individual books – and that’s my primary reason for doing this. Â I realize that books are expensive. Â And, also in its favor, Molly Leach has done a really nice job in redesigning the layout for each Seuss book. Â On the other hand, I’d prefer for students to read the books as originally laid out. Â Your Favorite Seuss includes all text, but moves artwork around so that it can include 13 books in fewer pages. Â As a compromise, I’m putting the original versions on Reserve (at the library) so that students can also see the originals.

One assignment I’ve retained from the original version of the class is “Sighting Seuss,” which requires students to keep an eye out for appropriations, references, parodies, etc. of Seuss in contemporary popular culture. Â Examples might include this Kids in the Hall sketch (1990), in which Dave Foley presents the “Dr. Seuss Bible”:

As it’s an election year, we should find many examples of Seuss in political satire. Â Since the 1990s, people have been aligning Newt Gingrich with the Grinch.

But he’s not the only one. Â John Kerry, George W. Bush, Osama Bin Laden, Barack Obama, and others have all been caricatured as the Grinch.

There are hundreds of examples of Seuss in popular culture. Â The point is to get students to think about the ways in which Seuss circulates in the public imagination. Â When people invoke Seuss (or his anapestic tetrameter, or his characters, etc.), to what purpose do they use him? Â In popular culture, what does Seuss mean?

One big change from the last time I taught this is that formerly obscure short films by Seuss are now easy to find. Â 5 years ago, I showed the class a bootleg DVD of Your Job in Germany (1945), a propaganda film written by Theodor Geisel (a.k.a. Dr. Seuss) and directed by Frank Capra. Â You can now see this via YouTube or Archive.org.

Indeed, until this weekend I had never seen Our Job in Japan (1945), another U.S. Army propaganda film written by Geisel – and, incidentally, considered so sympathetic to the Japanese that General MacArthur worked to prevent it from being shown to the troops. Â But now, it’s very easy to find (as in below, also courtesy of Archive.org).

I’ve assembled a whole page of these films. Â We’ll still view a few of these in class, but now the students have the luxury of re-watching them and seeing more than those screened during class. Â For those of you who lack the time to view all of those Private SNAFU cartoons, here are a couple of the better ones, which, yes, include some “adult” humor. Â (The audience were GIs, not children.) Â You will also note the sort of ethnic caricature common to Warner Bros. cartoons of the period.

Directed by Chuck Jones. Â If the voice reminds you of Bugs Bunny, that’s because Mel Blanc is also the voice of SNAFU. (From Archive.org)

Directed by Frank Tashlin. (From Archive.org)

Well. Â Any suggestions? Â Let me know. Â Classes start on Wednesday, and I’ll be editing the syllabus until then. Â Though (of course) I can modify the reading list during the term, I tend to do that only minimally once the semester begins. Â  If no suggestions, well, I hope you’ve enjoyed learning about, oh,… the thinks that we’ll think!