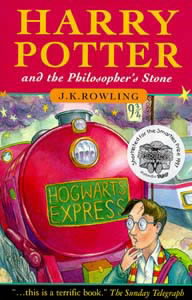 Ms. Flood also seems unaware of the vast body of scholarship on Rowling’s series –Â which Cornelia Remi has for years diligently tracked on her exemplary bibliography. Â While Potter scholarship does vary in quality, the ignorance of Professor John Mullan –Â who is quoted in the article –Â is truly exemplary. There’s a rare purity in his empty prejudices, shaped without knowledge or reflection. According to Flood’s article, Mullan said, “I’m not against Harry Potter, my children loved it, [but] Harry Potter is for children, not for grownups…. It’s all the fault of cultural studies: anything that is consumed with any appearance of appetite by people becomes an object of academic study.” Professor Mullan concludes that the academics attending the conference “should be reading Milton and Tristram Shandy: that’s what they’re paid to do.”Â  In one sense, it’s apt that a poorly informed article would be supported with a quotation from a poorly informed academic.Â  In another sense, one might pity Mullan and Flood for being ill-equipped to complete their tasks –Â in his case, intelligent commentary, and, in hers, responsible journalism. As Clementine Beauvais noted in her report on the conference, “It isn’t just careless, or uninformed, to dismiss theÂ Harry PotterÂ series as a serious object of analysis; it is intellectually dishonest.”

One suspects that Mullan and Flood would be surprised to learn that –Â in addition to the scores of books and articles about Rowling’s series –Â a portion of the manuscript for Harry Potter and the Philosopher’s Stone (Sorcerer’s Stone for American readers) is currently on display in the British Library, alongside works by Chaucer, Edmund Spenser, William Blake, Virginia Woolf, Samuel Taylor Coleridge, William Wordsworth, Kazuo Ishiguro, Ted Hughes, and George Eliot.Â  Indeed, the exhibit – Writing Britain: Wastelands to Wonderlands – does not segregate children’s literature from “adult literature,” a decision which would likely distress Professor Mullan. In addition to Rowling, the British Library’s exhibit features Kenneth Graham’s Wind in the Willows, A. A. Milne’s Winnie the Pooh, J.R.R. Tolkien’s The Hobbit, Arthur Ransom’s Swallowdale, Susan Cooper’s Greenwitch, and Lewis Carroll’s Alice’s Adventures Under Ground (the book which, in revised form, became Alice’s Adventures in Wonderland).Â  It also includes comics by Neil Gaiman and Alan Moore.Â  It’s a fascinating, well-curated exhibit.

Rowling’s manuscript pages (written in longhand) display an earlier version of Chapter 6’s first page (67, in the Bloomsbury edition).Â  In the published chapter, the second paragraph begins, “Harry kept to his room with his new owl for company.Â  He had decided to call her Hedwig, a name he had found in A History of Magic”Â  After another three sentences, the paragraph concludes:

Every night before he went to sleep, Harry ticked off another day on the piece of paper he had pinned to the wall, counting down to September the first.

On the last day of August, he thought he’d better speak to his aunt and uncle about getting to King’s Cross station next day, so he went down to the living-room, where they were watching a quiz show on television. He cleared his throat to let them know he was there, and Dudley screamed and ran from the room.

Uncle Vernon grunted to show he was listening.

In Rowling’s handwritten manuscript, the second paragraph begins, “Harry spent most of his time in his room with Widdicombe his owl.”Â  Then, there’s some crossed-out material that’s hard to read with added harder-to-read tiny new material above it, after which Rowling writes:

Â Â Â Â Â Â Â Â Â Â Â  He pinned a piece of paper on the wall, thinking of the days before he went to September the first marked on it, and he ticked them off every night.Â  On the thirty first of August he thought he’d better speak to his uncle about getting to King’s Cross next day. So he went down to the living room, where the Dursleys were watching a quiz show on television.

Harry cleared his throat to tell them he was there, and Dudley screamed and ran from the room.

Uncle Vernon grunted to show he was listening.

The revisions to the above offer a glimpse into Rowling’s creative process.

I concede that my off-the-cuff analysis of a few textual differences could be more robust. But my larger point here is that of course Harry Potter can be –Â and often is –Â the subject of academic analysis. Indeed, for roughly a dozen years, it has attracted a great deal of attention from literary critics. If we are interested in the craft of the most popular and influential writer of her generation, then it’s worth taking J. K. Rowling’s work seriously. If we care about the adults today’s children will become, then we need to take children’s literature seriously. Stories provide children with their earliest ideas about how the world works, and about what literature is and why it matters. Professor Mullan should care about books for the young because the children who enjoy reading are the ones most likely to grow into adults willing to read Laurence Sterne and John Milton. But we all should care about children’s books not merely because they help create literate grown-ups. We should care about them, study them, hold conferences on them, and write them because they are Art.