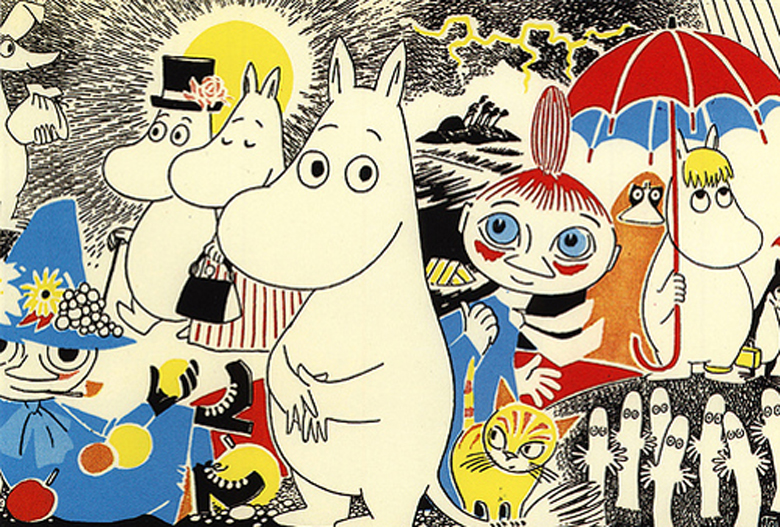 In America, children generally do not grow up with Tove Jansson’s Moomins as part of their childhood. Why is this? In other parts of the world, the Moomins are well-known and loved. There have been several animated television series made in countries as different as Japan, Sweden, and even the Soviet Union. There’s an amusement park in Finland. There are picture books, chapter books, and a comic strip. And there’s every imaginable product, as I learned a few weeks ago at Helsinki airport’s Moomin Store. 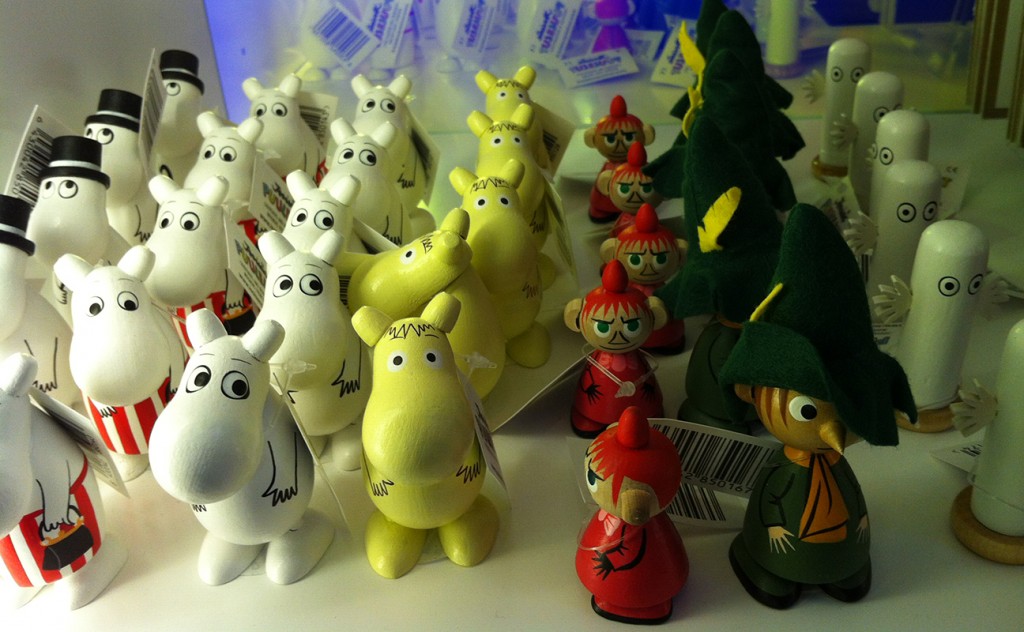 Karin and I talked about this last night, and here are a few thoughts why people (of any nationality) should read the books, and perhaps why they have not caught on as well in the States as they have in other countries.Â  Following that, a few basic facts about the series and their creator.

1) Fun and philosophical.Â  Like A. A. Milne and E.H. Shepherd’s Winnie the Pooh books, Jansson’s Moomin books feature visually appealing characters with a gently philosophical turn of mind.Â  Generally speaking, the Moomins look like a cross between Winnie-the-Pooh and a hippo (but a cuddly one).Â  They grapple with such questions as whether mother still loves us, finding one’s home and family in the face of natural disaster, how we mourn the dead, and whether there will be enough jam for the pancakes.Â  And, as the last item on my list indicates, Jansson tackles big ideas with a light touch.Â  The books are warm, funny, and generous of heart.

2) The books are about community.Â  They’re about more than just the Moomin family; they’re about others who live in (or just happen to be passing through) Moominvalley. There are the members of the gently bohemian Moomin family: Moominmamma, Moominpappa, Moomintroll.Â  There’s the Snork Maiden, Moomintroll’s on-again/off-again girlfriend; her brother, the Snork; Snufkin, traveler, troubadour, and Moomintroll’s best friend; Little My, a strong-willed, mischievous, independent Mymble; and Sniff, a capitalist version of Piglet, and friend of Moomintroll’s.Â  There are also Thingumy and Bob, small creatures who speak in Spoonerisms; the Niblings, hungry creatures who enjoy educational games; and many more. Moomin fans will fault me for neglecting the Hemulens, Fillyjonk, Too-Ticky, the Hattifattners, the Groke, and so on.Â  But the point here is that the Moomins are the glue that hold the community together.

3) The Moomins want to live life on their own terms –Â though not at the expense of others.Â  They’re individuals, but not selfish.Â  Community is important, but so is pursuing one’s own dreams.Â  On a related note, I also love the fact that they hibernate during the long, cold Scandinavian winters –Â a fact which motivates the plot for Moominland Midwinter (1958). One winter, Moomintroll wakes up, and decides that he wants to experience the season. 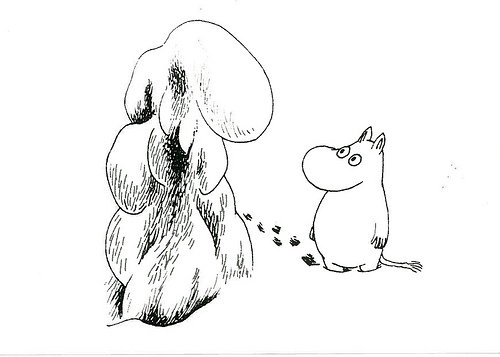 4) Where to start? If you haven’t read the Moomin stories, you need to. But where do you begin?Â  In English translation, there are 9 chapter books, 3 picture books, and 6 volumes (and counting) of the Moomin comic strip.Â  I recommend starting with Finn Family Moomintroll (first published in the US as The Happy Moomins, 1952) or Moominsummer Madness (1955).Â  Though not the first two books in the series, they offer the strongest introduction.Â  Purists may want to start with Comet in Moominland (1951) or even The Moomins and the Great Flood, the very first book (though the last translated into English, probably because it omits most major characters).Â  As an alternate choice, Drawn & Quarterly’s beautiful collections of the Moomin comic strip offer a great introduction.Â  The strip can be a bit more topical and more surreal, but it also provides more of Jansson’s art, which is always a pleasure.

These last two Moomin chapter books are darker, more existential.Â  I would not recommend starting with these. 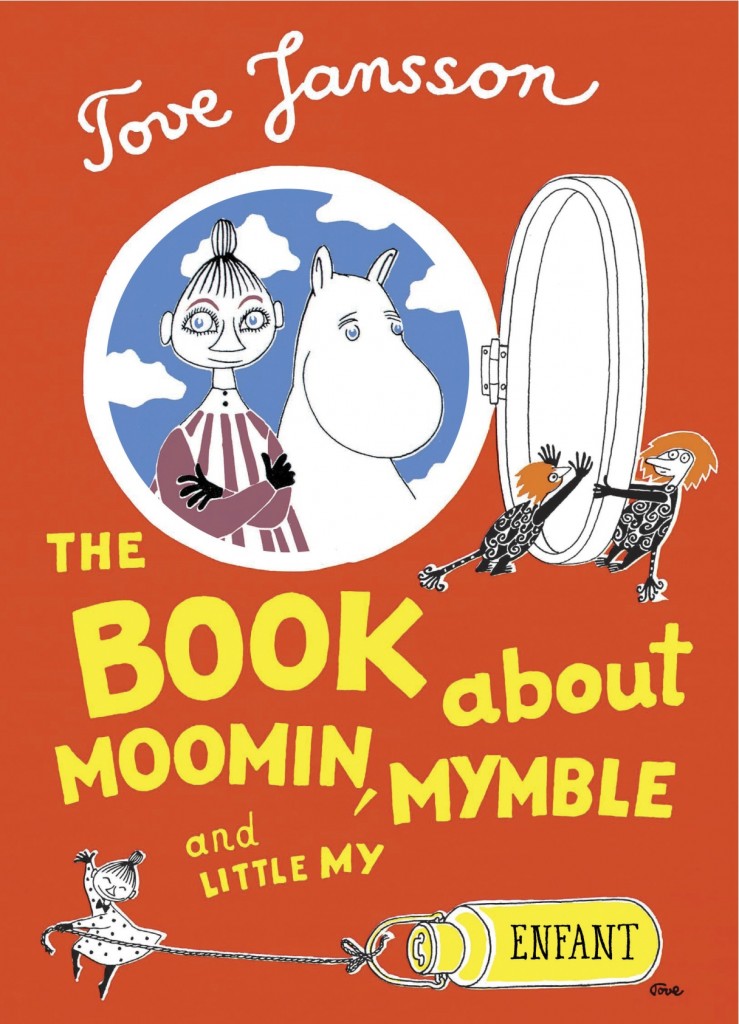 There are actually five, but only three have been translated into English.

The comics: Drawn & Quarterly have been republishing these, which were started by Tove and later taken over by her brother Lars.Â  (By volume 6, it’s all Lars.)

6) What language were they published in, originally?

Though Tove Jansson (1914-2001) was Finnish, she was part of that nation’s Swedish-speaking minority.Â  She wrote the books in Swedish. The books have been published in all major languages.

7) What are “Moomins” called in Finnish? 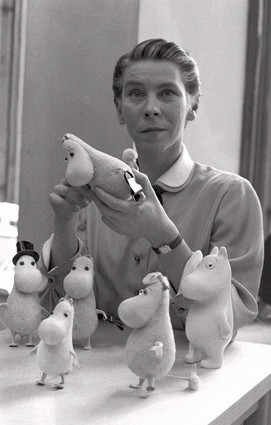 9) How do you pronounce Tove Jansson?

“Toe-vuh Yon-sun,” with the accent on the first syllable in each word.Â  For many years, I pronounced her first name as if it rhymed with “stove,” and her surname as if the “J” were hard.Â  Then, I heard her niece, Sophia Jansson – who, as readers of Tove Jansson’s The Summer Book know, was very close to her aunt –Â talk about the Moomins and Tove.Â  And I realized how wrong I was.Â  So, to say it correctly, think Swedish and say “Toe-vuh Yon-sun.”