Over on Public Books today, I have a new, short piece on Francesca Sanna’s The Journey, a.k.a. one of the best picture books published last year.  If you have yet to read it, check out “Refugee Stories for Young Readers” (my essay), which includes some images from the book.  In the piece, I observe that

As Francesca Sanna’s The Journey (2016) demonstrates, the children’s picture book is the ideal medium for voicing that unsettling feeling when something unbelievable suddenly becomes true. Its visual metaphors render difficult emotions clearly, and illustrate children’s literature’s ability to express dark realities in the language of the fantastic.

The book follows a refugee family’s journey away from their home country, towards an uncertain future. It’s beautiful, wise, moving and, yes, appropriate for children.  (In the essay, I also look at some other recent children’s picture books on refugees.)

As I also note in the piece, more than half of the world’s refugees today are children under the age of 18. That’s nearly 50 million young people, making this the worst child refugee crisis since World War II.

As the Syrian war reaches its 6th year, 6 million children now depend on humanitarian aid while 2.3 million now live as refugees. pic.twitter.com/dAFrWsjNNe

If you can, please donate to the International Rescue Committee.  You might also consult the organization’s website – lots of useful information there.

At the beginning and explicitly at the end of my brief essay, I call out the U.S. government’s inhumane response to refugees. Though I’ve written other pieces critical of Trumpy’s amoral regime, they’ve mostly been on my blog.*  This is my first such piece to appear in a “real” publication.  There will be others.

Am I indulging in the delusion that my writing is changing hearts and minds? If I am honest with myself, I hope my words might do that – even if they reach only one person. I think it more likely that what I write may aid someone already resisting our tiny-fingered overlord and his wrecking crew, perhaps by reflecting back her thoughts in a slightly different light, or by offering another way of approaching a question, or by providing information.  At the same time, I know that phoning and writing my representatives, marching, protesting are all more important. So, I’ll keep doing those things, too. Though any result of my scholarly/writerly efforts will be hard to quantify (and may be purely imaginary), I’ll keep on doing this simply because it’s what I do as a writer and scholar.  Not incidentally, it’s a theme I notice across the culture. 99% Invisible recently did a two-part episode on sanctuary (part 1, part 2). The Allusionist devoted an episode to the history of sanctuary.  Podcasters create podcasts, composers make music, and writers write.  In addition to whatever direct actions we also take, we can all contribute via our chosen medium.  (And, on that subject….)

My job is thinking about how literature for young people can help children – and all of us – make sense of the world.  As I’ve written elsewhere, children’s books have much to say to those of us who are no longer children.  The Journey certainly does.

* Mostly on my blog. I also wrote a piece for the Dedicate Your No-Trump Vote effort last September. Earlier this month, I was extensively quoted in Michael Cavna’s Washington Post column, and a little bit in this Key Reporter piece. 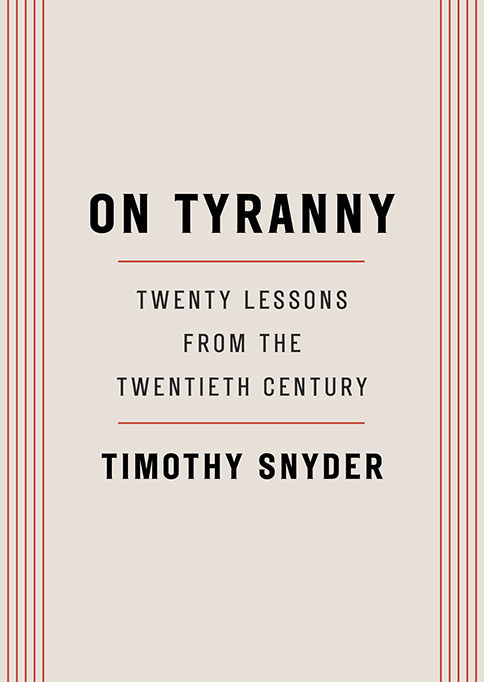 Is cataloguing this information here simply aiding the Trumpocracy, should it wish to add me to its list of undesirables?  It might be. But it’s important to remind ourselves: Do not obey in advance.  If you haven’t already read it, check out Timothy Snyder‘s brief, useful, and conveniently pocket-sized book On Tyranny: Twenty Lessons from the Twentieth Century (Tim Duggan Books/Random House, 2017).  Its very first lesson is:

Do not obey in advance.

Most of the power of authoritarianism is freely given. In times like these, individuals think ahead about what a more repressive government will want, and then offer themselves without being asked. A citizen who adapts in this way is teaching power what it can do. (17)

So. Do not obey. Resist! Contact your representatives and senators – at both the federal level and the state level. VOTE in all elections! And keep paying attention. As The Washington Post‘s Trump-era slogan (introduced Feb 22nd) reminds us, “Democracy Dies in Darkness.”