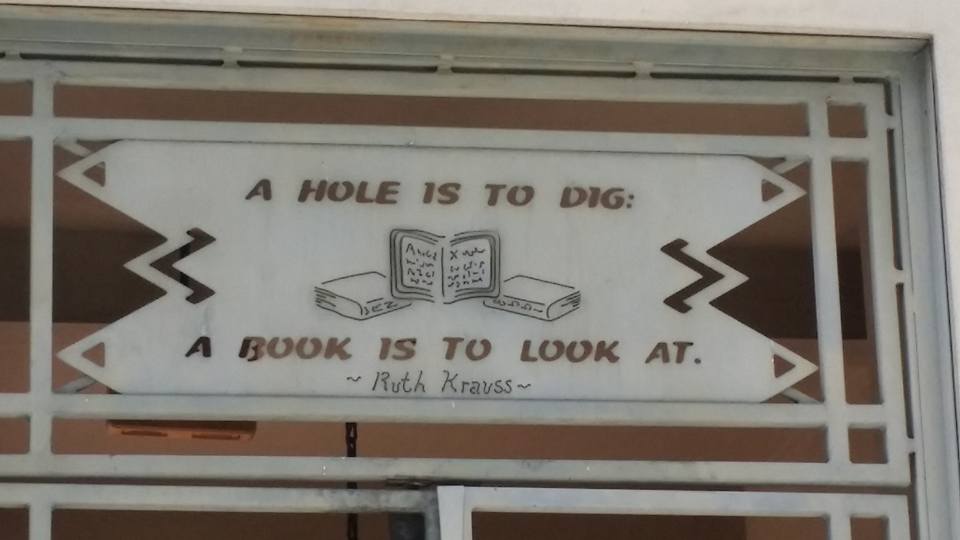 If she were alive today, you would be wishing Ruth Krauss a very happy 106th birthday.  And yet Krauss was actually born 116 years ago, not 106 years ago. 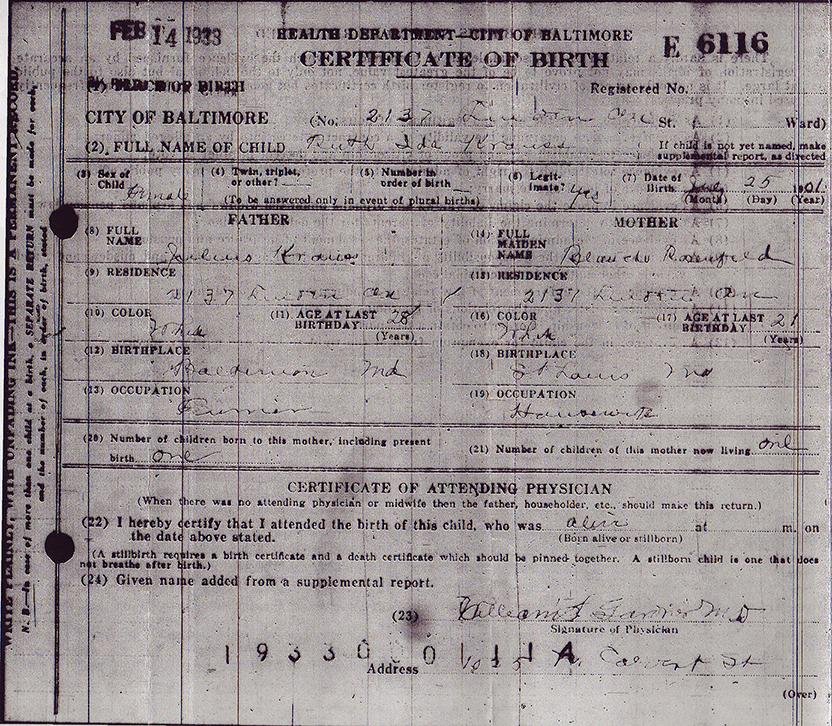 Look at the date in the upper-right-hand side of the document: July 25 1901.  Here, let’s zoom in on that date so that you can see it a bit better.

Nonetheless, today, were Ruth still with us, you would be wishing her a happy 106th birthday.  Indeed, many reference sources list her birth year as 1911, instead of 1901. Why the discrepancy?

When she turned seventy, Ruth became acutely aware that people would see her as old. She felt young. So, she changed her birth year. As she would later tell a female friend, “You’re only as old as other people think you are, so always lie about your age—and preferably in increments of ten, because it’s easier to keep track of it.” 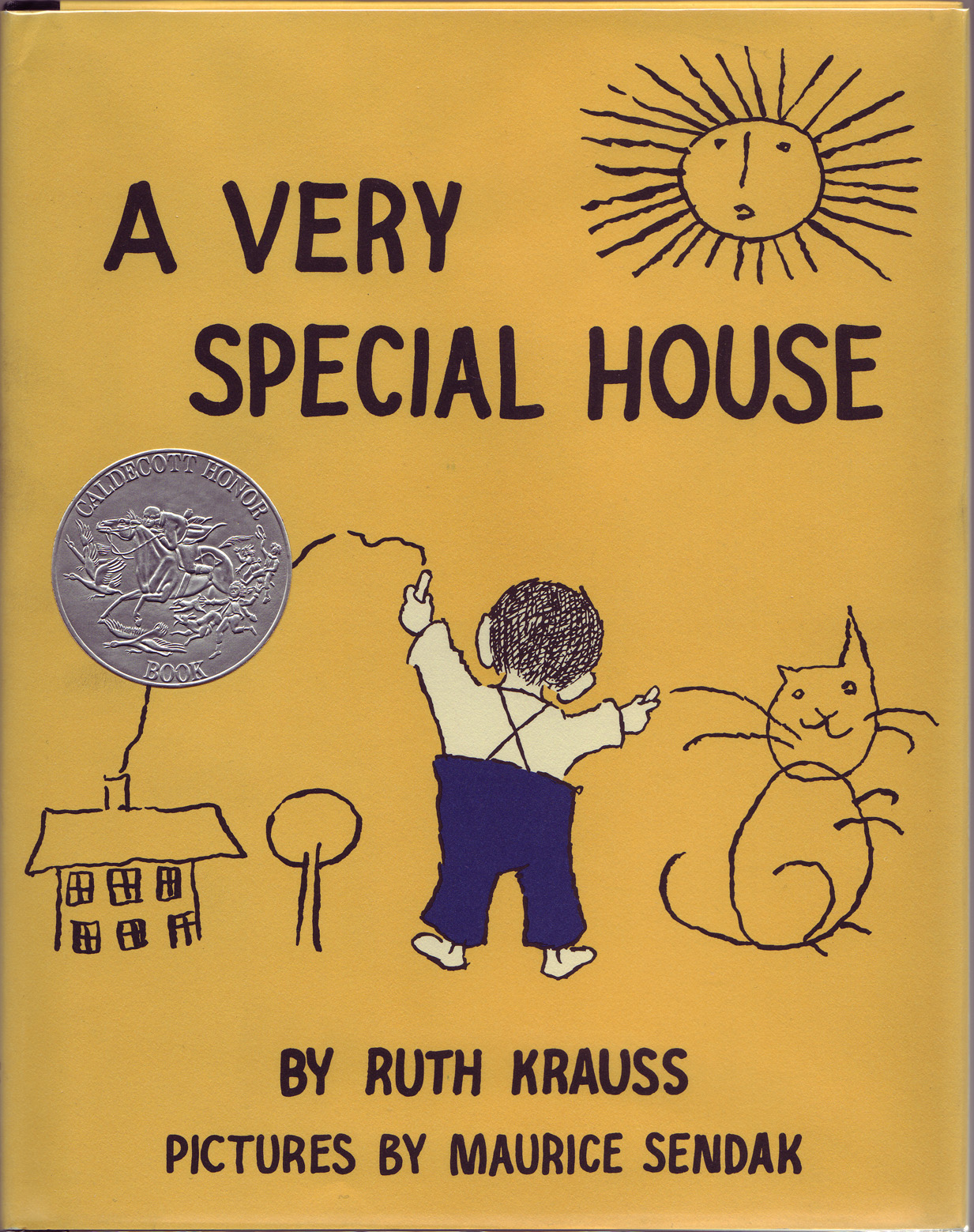 That’s good birthday advice. And it’s an appropriate outlook for a writer best known for her understanding of young people.  She had a knack for listening to children, capturing their idiosyncratic, practical locutions and then turning them into art — most famously, A Hole Is to Dig (1952), the book that launched Maurice Sendak‘s career and the first of eight children’s books they created together.  Their next, The Happy Day (1953), won Sendak his first Caldecott Honor.  If you’re new to her work, you might also read The Carrot Seed (1945, art by Crockett Johnson [her husband]), The Happy Day (1949, art by Marc Simont), Is This You? (1954, a collaboration with Johnson), I’ll Be You and You Be Me (1954, art by Sendak).  There are many more, but these — with the exception of Is This You? — are all in print, and thus should be readily available. 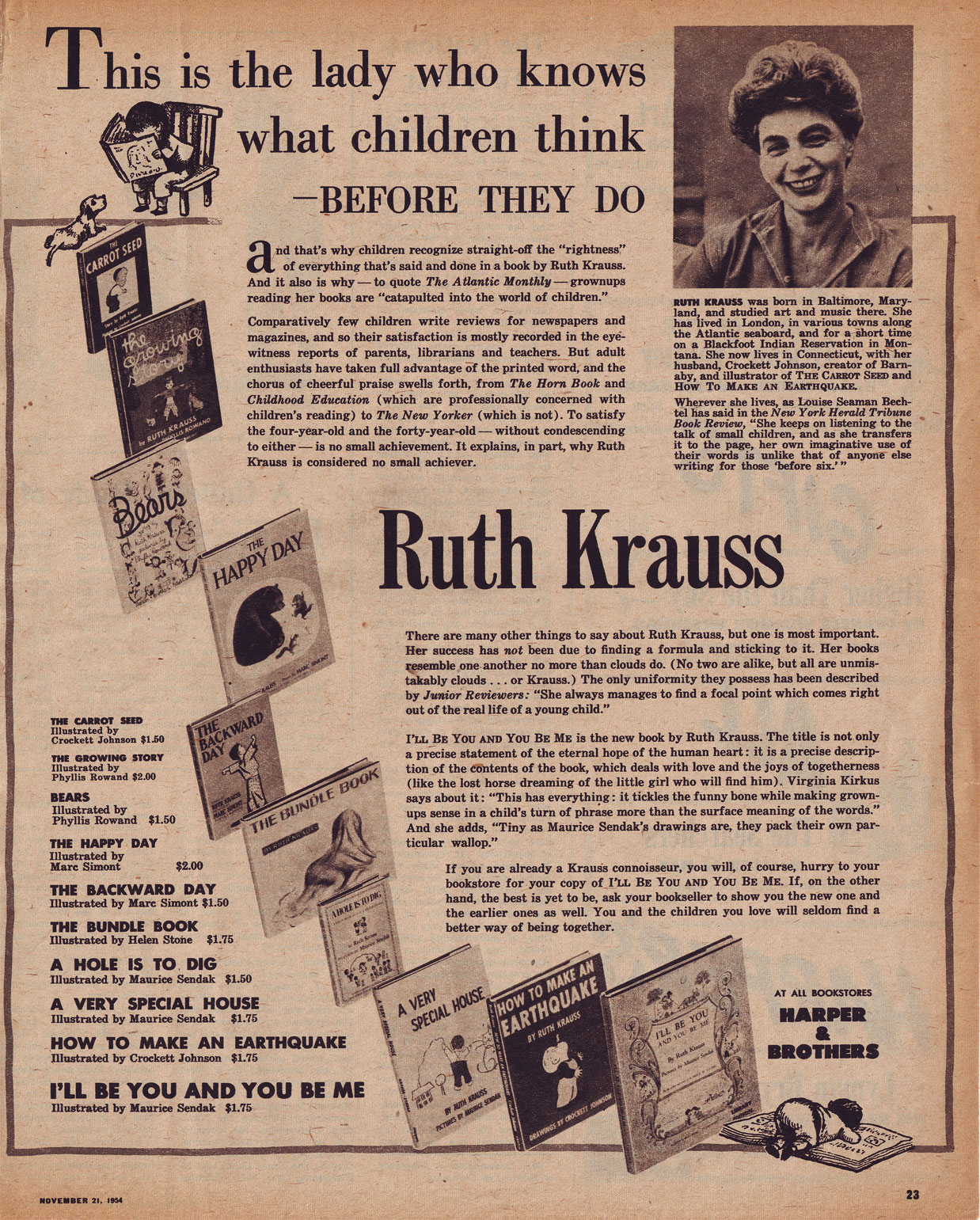 Back to the birth certificate. Eagle-eyed readers may have noticed something curious about that document.  Did you?  Scroll back up and take a look.  See anything odd there?

Right. It was filed February 14, 1933 — 31 years and 9 months after she was born.   Why wait so long to file a birth certificate?  My theory is that the Great Baltimore Fire incinerated the original document in February 1904.  (Ruth was born and grew up in Baltimore.)  Why file a new one 1933?  I’m not sure.  In 1934, she married her first husband Lionel White — a true-crime writer.  Perhaps the impending marriage motivated her to seek this document.

Another question you may have is: Why trust this document, given its late filing date? Several people who knew her very well confirm the 1901 date. Notably, Betty Hahn — married to Ruth’s favorite cousin Richard Hahn — said she was born in 1901. Ruth was 12 years older than Richard. She couldn’t hide her birth date from her family.

For more on Krauss and her husband Crockett Johnson, you might enjoy my double biography Crockett Johnson and Ruth Krauss: How an Unlikely Couple Found Love, Dodged the FBI, and Transformed Children’s Literature (2012).  Or you might not.  I don’t know you, and I suppose I shouldn’t venture to predict.

Image credits: Cam Smith Ostrin for the photo of the quotation from Ruth Krauss’s A Hole Is to Dig (1952, illus. by Sendak) on the Los Angeles Public Library (thanks, Cam!); Chris Ware for the cover of the biography (I will forever be grateful, Chris!).  The other credits are either obvious (Sendak did the cover for A Very Special House) or scans provided by yours truly.