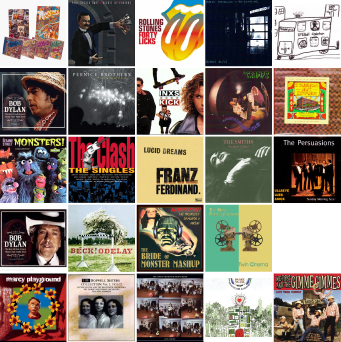 On last week’s mix, I felt obliged to include many of the songs people expect on a Halloween mix. Â You’ll hear more such songs in the coming weeks (“Zombie Jamboree,” included on this mix, is one). Â But you’ll also hear other songs, such as Roybn Hitchcock’s “The Devil’s Coachman,” Eyeball Skeleton’s “Eyeball Skeleton,” and the Boswell Sisters’ “Heebie Jeebies” Â Indeed, this may be the only Halloween mix you hear that has both the Boswell Sisters and the Clash. Â And it begins with theÂ maniacal cackle of the late Joe Strummer.

Released only as a single (and not on an album), this song reflects the Clash‘s immersion in the then new genre of American rap music. Â And it’s one of the reasons that the Clash are the greatest punk band of all time: they did punk very well, but also rock-n-roll, reggae, dance, and hip-hop. Â Their musical curiosity makes their albums consistently interesting and – in the case of London Calling (1979) – even outstanding.Â Â In the video below, they are performing “This Is Radio Clash” on the Tom Snyder Show, circa 1981.

During the 1990s swing revival, the Squirrel Nut Zippers reached back before the swing bands of the late 1930s and 1940s (the groups that inspired most of their contemporaries) to hot jazz of the 1920s. Â This was the group’s biggest hit. Â Here they are performing it on David Letterman’s show:

Asked which singer most influenced her, Ella Fitzgerald would invariably reply, “Connee Boswell.” Â Though today overshadowed by the Andrews Sisters, the Boswell Sisters – Connie, Martha, and Vet – did close-harmony jazz singing a full decade before the Andrews Sisters. Â Indeed, LaVerne, Maxene and Patty Andrews modeled their group on the Boswells’ group. Â Below, the Boswell Sisters sing the “Heebie Jeebies” in The Big Broadcast (1932).

This song, a favorite of college a cappella groups, was first recorded by “The Charmer.” Â  This young calypso singer went on to have a much better-recognized career, leading the Nation of Islam. Â The Charmer’s real name was (and is) Louis Farrakhan.

“Keats and Yeats are on your side, but weird old Wilde is on mine.” Â As a teen-ager, I was a Smiths fan, but I didn’t fully appreciate Morrissey’s mischievous sense of humor until much later. Â Below, the Smiths perform “Cemetery Gates” at the National Ballroom in Kilburn, 1986.

The Australian band – named for buildings in the capital of Finland – included this song on the album In Case We Die.

Joe Pernice, Bob Pernice, and the rest of the band perform a song from Yours, Mine and Ours. Â This was the first Pernice song I heard, though this wasn’t the group’s first album (that was Overcome by Happiness, released in 1998). Â Below, the Pernice Brothers performing this song in Paris, May 2010.

I’d guess that Dinah Washington is best known for her pop hit “What a Difference a Day Makes” (1959), but she recorded in many styles, including blues, jazz, and R&B. Â She made many great records in her short but troubled life (she married eight times, and died of an overdose at age 39). Â If you’re unfamiliar with her work, I highly recommend the 2-CD collection First Issue: Dinah Washington. Â This particular track does not appear on that album. Â The recording you hear here comes from disc 2 ofÂ The Best of Bob Dylan’s Theme Time Radio Hour.

From the third album by the Canadian indie supergroup, featuring the vocals of Neko Case, with A.C. Newman on guitar.

One of many hit singles from INXS’s hit album, Kick. Â And here’s the video, in all its 1980s campiness. Â Smoke machines! Â Big hair! Â A devil mask! Â Oh, my.

Earlier this year, Beck’s Record Club did a great cover of the above INXS song. Â But our Beck song for this particular mix comes from his Grammy-winning record Odelay. Â Below, the video:

“The universe is based on sullen entropy. Â It falls apart as it goes on.” Â From Hitchcock‘s Queen Elvis – which, incidentally, does not include the song “Queen Elvis.” Â That’s on Eye (1990).

From the 2004 2-CD issue of The Name of This Band Is Talking Heads. Â Originally released in 1982 with a 1977 Massachusetts recording of “Psycho Killer,” The Name of This Band… in its new version also includes a 1981 Tokyo recording of the song. Â Below, David Byrne and boom box perform the song at the beginning of Jonathan Demme’s brilliant Talking Heads concert film, Stop Making Sense (1984).

Punk + rockabilly = psychobilly, a musical genre that the Cramps helped create. Â At the time this song was recorded, the Cramps were the late Lux Interior (Erick Purkhiser, 1946-2009) on vocals, Poison Ivy (Kristy Wallace) on lead guitar, Kid Congo (Brian Tristan) on guitar, and Nick Knox (Nicholas Stephanoff) on drums. Â Below, here’s that lineup, performing at the Mudd Club, NYC, 1981.

Pilchard mashes the Hives’ “Hate to Say I Told You So” (2000) with Screaming Lord Sutch‘s “Jack the Ripper” (1963). Â David Edward Sutch (1940-1999) was a musician and politician. Â Under his pseudonym Screaming Lord Sutch, he released horror-themed singles and LPs and he ran for office. Â In the 1960s, he ran for Parliament as a member of the National Teenage Party. Â In 1983, he founded the Official Monster Raving Loony Party, and ran for Parliament many times. Â Sutch suffered from depression and took his own life in 1999. Â Sweedish garage rockers the Hives are best known for their hits “Hate to Say I Told You So” (2000) Â and “Tick Tick Boom” (2007). Â And for their black-and-white outfits, which they change with each tour. Â They wore suits with ascots for Veni Vidi Vicious (on which “Hate to Say I Told You So” appeared) and schoolboy outfits for The Black and White Album (on which “Tick Tick Boom” appeared).

The hit from the band‘s fourth studio album,Â Agents of Fortune.

From Me First and the Gimme Gimmes’ Love Their Country, the punk supergroup‘s album of country-and-western covers.

A #11 pop hit, this song was also the Electric Prunes‘ biggest hit. Â You can find it as the opening track on the fantastic collection Nuggets. Below, the Electric Prunes perform the song on The Mike Douglas Show. Â Afterward, Douglas talks to the band, and Barbara Feldon learns to play the drums, accompanying the band on “Get me to the World on Time.”

The single version of the track released (in a different, longer version) on the band‘s Tonight (2009). Â And, yes, the band is named for the archduke whose assassination lead to the First World War. Â Below, a long version of the song, live from the iTunes Music Festival, 2009.

The first single (and a #1 hit in both the US and UK) that appears on the American edition of the Stones‘ fourth album Aftermath, which also includes “Under My Thumb” and “Lady Jane.” Â In the UK, it appeared only as a single. Â Below, the Stones lip synch the song on a British TV show, 1965.

The Strangeloves were not the Australian brothers Miles, Niles and Giles Strange, as their publicity materials claimed. Â They were the creation of New York songwriter-producers Bob Feldman, Jerry Goldstein, and Richard Gottehrer. Â They also were not a one-hit wonder. Â They were a three-hit wonder. Â “I Want Candy,” “Cara-Lin,” and “Night Time” were all top 40 hits in 1965. Â Though it didn’t quite make the top 40 of the pop charts, Bow Wow Wow‘s cover of “I Want Candy” (1982) was a club hit. Below: the Strangeloves and lots of dancers on TV, c. 1965.

Featuring the voice of Marilyn Sokol, this song appeared on Sesame Street and on the album Sesame Street Monsters in 1975. Â According to the MuppetWiki on the song, the song was removed from rotation when a mother complained that the song’s verse “If I make friends with a friendly monster, /Â I’ll let him bounce me on his knee. /Â I’ll let him do whatever he wants ta, /Â Especially if he’s bigger than me” could be “interpreted in an unwholesome way.”

Eight-year old J.J. Brown, ten-year old Charlie Brown and their dad – the trio known as Eyeball Skeleton – released #1 (on which this song appears) in 2005. Â  Are Eyeball Skeleton still a going concern? Â The band’s static MySpace page suggests not.

Frank Zappa gave the Persuasions their big break, producing their first album,Â A Cappella (1970). Â They, in turn, paid tribute to him on Frankly A Cappella: The Persuasions Sing Zappa (2000). Â This track is not from that album, but from Sunday Morning Soul (also released 2000). Â After over 40 years, the Persuasions – featuring three original members – are still going strong.

And that’s it for this week. Â Stop by again next week for a third Halloween mix.