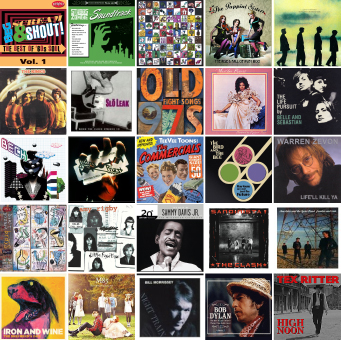 From the band‘s album British Steel.

A cover of the Richard Thompson song, from the excellent album Freedom and Rain. The albumÂ also features covers of Billy Bragg, the Pogues, and the Velvet Underground. Â A great record.

From The Life Pursuit. Â Below, Belle & Sebastian perform the song live at the Lowlands Festival in 2006.

Featuring a vocal turn by Dave Davies, this song appears onÂ The Kinks Are The Village Green Preservation Society.

Inara George and Greg Kurstin (a.k.a. The Bird and the Bee) from Ray Guns Are Not the Future.

The Sly Fox (born Eugene Fox, 1928-2000) sings about what the hoo doo say. Â After a brief recording career in the early 1950s, Fox left music for education. Â He became a teacher, and did not return to the recording scene.

Slo Leak are an all-star band of studio musicians & producers – “all-star” in the sense that members of the band have worked with many stars, from Aerosmith to Rufus Wainwright. Â This track is on the group’s first album, When the Clock Strikes 12.

From the Dirty Dozen Brass Band‘s The New Orleans Album.

Appears onÂ Sandinista, the Clash‘s triple-album of a wide array of styles – punk, rap, R&B, reggae, & dub. Â If not as strong as the group’s previous album (the brilliant London Calling), this record does have some great songs, including “The Magnificent Seven,” “Charlie Don’t Surf,” and “Police on My Back.”

From the Old 97’s Fight Songs.

Brenton Wood (bornÂ Alfred Jesse Smith, 1941) had two hit singles in 1967: this one, and “Gimme Little Sign.” Â My recording of this song comes from the collection Beg, Scream & Shout! The Big Ol’ Box of ’60s Soul, but I’m sure it’s on many other compilations, too.

Reeves‘ cover of Van Morrison’s song appeared on her first solo record. Â (She split with the Vandellas in 1972.)

“The Candy Man” originally appeared in the film Charlie and the Chocolate Factory (1971), but this is the best known recording of the tune, and a #1 hit record for Sammy Davis Jr. Below, Davis performs the song:

Kweller covers the Chordettes’ 1958 hit “Lollipop.” Â The song appears on the soundtrack to the video game Stubbs the Zombie.

The star of many cowboy movies and the father of the late John Ritter, Tex Ritter had a successful career as a country singer. Â This particular song wasn’t one of his hits, but it’s a good one!

The commercial jingle for Hershey’s chocolate. Â I wasn’t able to find this particular commercial on YouTube, but here’s one from (I think) the early 1980s. Â Note its attempts to represent a “diverse” American population.

From Whitehurst‘s final album, begun as an attempt to sharpen up his songwriting chops after what he’d hoped were successful treatments for his cancer. Â Unfortunately, Very Tiny Songs proved to be his last record. Â Logan Whitehurst died in December 2006 at the age of 29. Â But he left behind a remarkable body of delightful, original work. Â Some of my favorites are “Happy Noodle vs. Sad Noodle,” “Me and the Snowman,” “Internal Banana Farm,” and “Farkle!” (of which there are several versions). Â If you enjoy They Might Be Giants or Parry Gripp, then Logan Whitehurst may well appeal to you, too.

From Iron & Wine‘s The Shepherd’s Dog.

From the band‘s albumÂ Ocean Rain. Â Also on the hits collection Songs to Learn and Sing.

From the late Mr. Zevon‘s album of the same name.

From Bill Morrissey‘s Night Train, which does not include the jazz standard of the same name but does feature a great duet – “Love Arrives” – with David Johansen.

That’s all for now. Â It’s going to be a busy week, but I will do my utmost to post volumes five, six, and seven of the Halloween mixes before the 31st.