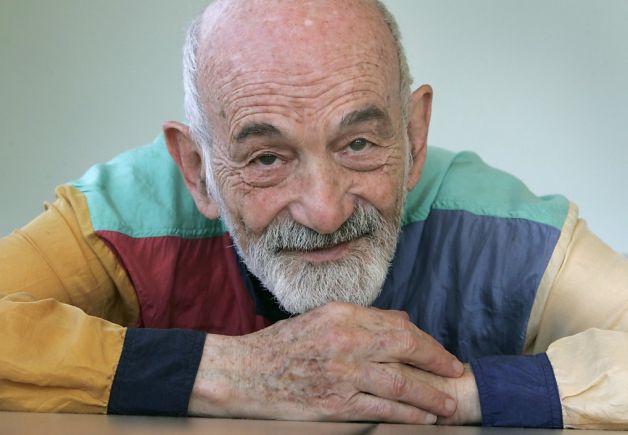 As you may have heard by now, Remy Charlip has passed away at the age of 83. The author of Fortunately (1964), Arm in Arm (1969), Thirteen (1975) and many others, Charlip was also a dancer, choreographer, and the model for Brian Selznick’s rendition of Georges MÃ©liÃ¨s in The Invention of Hugo Cabret.

He was also one of many people I interviewed for the biography of Crockett Johnson and Ruth Krauss.Â  He knew them both, and illustrated two of Ruth’s books – A Moon or a Button (1959) and A Fine Day For… (1967).Â  During our interview (23 March 2003), he told me about working with Ruth on the first of these two books.

Philip Nel: Well, let’s see.Â  Maybe we should just start with when you first remember meeting them — or meeting Ruth.

RC: Do you know that book?

RC: Anyway, it was published after Margaret Wise Brown died, and it’s a story about a little boy who finds a little Indian and together they name the days.Â  So, she said she loved the book, and I don’t remember the letter very well, but I do remember that either she asked me to get in touch with her or I got in touch with her.Â  I don’t know.Â  I knew her books — I think I knew A Hole Is to Dig and I’ll Be You and You Be Me.Â  And I’ll Be You and You Be Me is a very — one of my favorite books of Ruth’s.Â  She influenced me in writing.Â  I think Arm in Arm actually came as a direct inspiration from her work.

I usually tried to read some (or most) of an author’s work before I interviewed him or her. In this case, I did not: I had grown more aware of the mortality of my interviewees. So, as soon as I had his telephone number, I gave him a call.

RC: Well, one thing I learned, for instance, was we did — I decided — she started to, after a while — let’s see, what was the first book that we worked on together?

RC: A Moon or a Button.Â  OK, so, we did that, and (Laughs).Â  And this is very interesting.Â  She brought me up to see Ursula Nordstrom, and Ursula would have no truck with me at all.Â  I made full-color paintings for that book, and the first thing Ursula said to me was, “Black-and-white separates the men from the boys.”Â  It was a total insult, and a total, you know, particu — you know.Â  Um.Â  I don’t know.Â  Maurice used to call her “the” — and you can’t print this —

RC: And, so, I think what Ursula really resented was that in Ruth’s generosity, she would always work with people who were younger, who were inexperienced, and who she thought had some talent and would like to help them — and as well as to work with people that she thought [their] work was exciting.Â  So, let’s see — so, she got very upset.

RC: Yeah.Â  At Ursula.Â  And, she took my paintings, she kind of gathered them up from the desk in her arms and hands, and threw them up in the air, and ran out, crying, to the ladies room.Â  Ursula ran after her.Â  And I sat there thinking, “The children’s book business is much more exciting than I thought.”Â  (Laughs.)

Discussing Ruth’s poem, “The Song of the Melancholy Dress,” he told me:

RC: And anyway, I asked her where she got the idea for the melancholy dress, and she said, “Oh, I overheard somebody say something at a party, and the woman said that she bought a melon-colored dress.”Â  And, so, a lot of her ideas came from misunderstandings, and I love that because I found that very helpful when one is working, you know, that you –.Â  And that’s really creativity, when you use something as something else.Â  And so, when I did the Paper Bag Players, which is a children’s theater, the costumes were all made out of common-place household objects and material — like, say, a shower curtain for the water, a box, big box, for the costume of a soldier — you know, that kind of thing.

RC: And, or a lampshade as a hat, lace curtains for a dress.Â  So, the Paper Bag Players was all about how you can — so, that’s another thing that I actually learned from her — in another way, I mean, I also had friends who were, like Lou Harrison, for instance, who one day said, “I’m going shopping up in the Bronx.Â  Would you like to come with me?”Â  And I said, “Sure.”Â  And we went up to an automobile graveyard, and had a little meter with him, and he was hitting brake drums to get the sound that he wanted, a particular note. And he was very — it was very urgent that he do it because they were now not making the break drums in the same way that they were.Â  They made thuds instead of boungs.

RC: So, it was probably something at the time, where I myself take things that you ordinarily look at one way, but then you can look at it in another way.

PN: And that’s a good description of what Ruth does.

It’s also a good description of what Remy did.

For an example of that (and of his sense of humor), you might take a look at this excerpt from his It Looks Like Snow, which I posted back in March of 2011.